Share this… Facebook TwitterAlthough under normal conditions it makes no economic or scientific sense to install solar panels way up here at 53° north latitude in somber northern Germany, generous subsidies make it risk-free. So either you jump through the hoop and take the money, or you pay through the nose. I have to make a […]

Share this… Facebook TwitterWarmist site Klimaretter (Climate Rescuer) here brings us the news that yet another German solar company is going under, and with it taking down hundreds of “future” jobs. We should note that like the solar industry, the warmist movement is also hurting financially. For example, Klimaretter is now begging its readers for […]

Share this… Facebook TwitterOne of the big problems with emissions reduction treaties like Kyoto is how to enforce them. Sure countries can pledge to make cuts, but how can you be sure they won’t cheat? It turns out that Europe is working on that. German warmist website CO2 Handel here tells us how Europe intends to […] 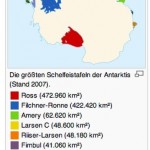 Share this… Facebook Twitter Veteran meteorologist Klaus-Eckart Puls at the European Institute For Climate and Energy (EIKE) presents an analysis of Antarctica. ================================== Climate Panic Orchestra Now Playing In Antarctica by Klaus Eckart Puls (Translated/edited by P Gosselin) Now that we are at the Antarctic late summer and autumn (February-April), extensive calving of the ice sheets […]

Share this… Facebook TwitterMore cracks like never before are appearing in Germany’s climate alarmism. Not long ago global warming science was considered settled here. So much so that climate protection has long since been institutionalized. Now it’s all starting to look like a very expensive mistake. The threat of a spectacular crumble is becoming real. […]

Share this… Facebook TwitterGerman flagship news magazine Der Spiegel reports here on new satellite measurements of Himalayan glaciers. Not long ago IPCC scientists, among them Prof. Hans-Joachim Schellnhuber and train engineer Dr. Rajendra Pachauri, claimed with grave tones that the Himalayan glaciers would disappear by 2030. Hat-tip: a NTZ reader. That, among other errors, fantasies […]

Share this… Facebook TwitterThere has been a rash of dubious papers published lately. Many of us suspect that the IPCC is desperate for science that can serve to prop up the ailing global warming science of its upcoming 5th assessment report. The most recent include papers by Jeremy Shakun et al, who attempt to put […]

Dramatic Sea Ice Increase! Why So Many “Dramatic Drops”, But Never “Dramatic Rises”?

Share this… Facebook Twitter Best-selling authors Prof. Fritz Vahrenholt and geologist Dr. Sebastian Lüning comment on Shakun’s recent “Nature” paper at their kaltesonne.de site. One of the most hotly disputed points in the climate debate is CO2 climate sensitivity. The warmists would like to have everyone believe that CO2 is the primary climate driver in the climate system. […]