It used to be that weather extremes were “proof of man-made warming”. But because that argument didn’t seem to sway anyone, the warmists have taken it a level higher: now even the storm’s path is proof. This is how desperate they’ve become. Thirty years ago, such people would have been committed to a nuthouse. 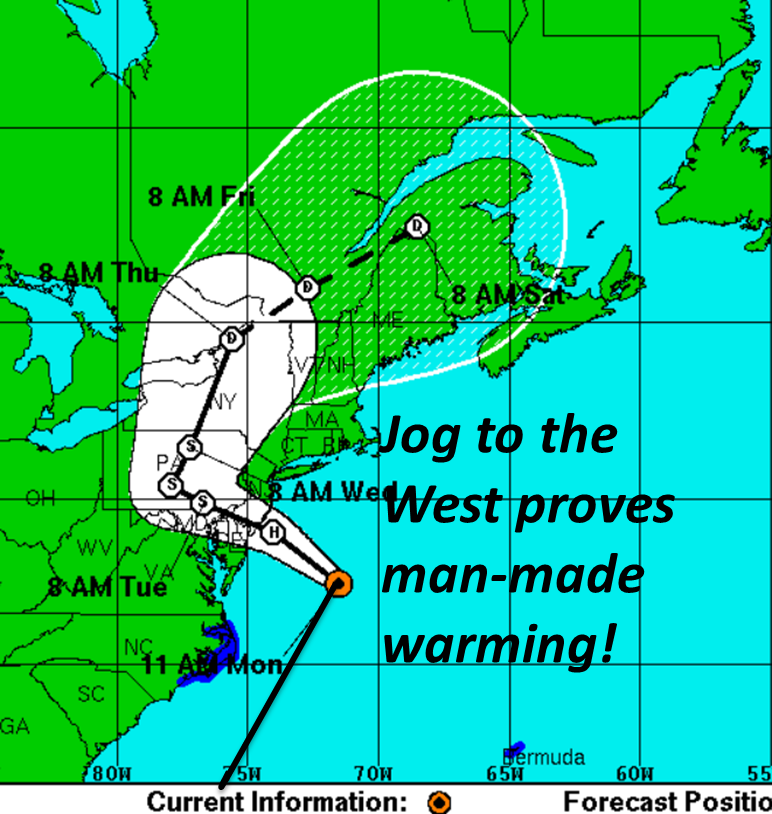 Normally nor’easters more or less follow a path parallel to the East Coast. But this time Sandy took a sharp turn westwards into New Jersey before heading north again. If Sandy had followed the usual path, it would have left the East Coast pretty much unscathed and the storm would have been considered “normal” and gone by more or less unnoticed; everyone would have yawned.

But Sandy made a jog to the west, and now the warmist bedwetting media jackasses are freaking out seriously, hailing it as irrefutable proof of man-made climate change, dubbing it a “mega-storm“, “superstorm“, “monsterstorm“, … a “Frankenstorm“!

All because of a jog in its path.

The German leftist TAZ even tries to add Biblical proportions to it, writing:

With regards to the emergency, the Pope has called for solidarity and a readiness to aid.”

The warmists are seriously grasping at any straw. The barometer has gotten that low for them.

3 responses to “Now A Mere Jog In A Storm’s Path Has Become Proof Of Manmade Climate Change…”Pope Calls For Solidarity!””