Sheesh! This is like a Normandy invasion – this one by the climate science skeptics. The Americans have landed on one beach, and now the Canadians are following on another.

First it was Prof Fred Singer of the USA, then the evil Heartland Institute, and now it’s veteran investigative journalist Donna Laframboise of Toronto, Canada.

Donna’s hard-hitting, unflattering book exposing the corruption rampant within the IPCC has been translated in German and is now being launched in Germany, Austria, Switzerland and Luxembourg – i.e. the heart of the climate catastrophe regime in Europe.

Note that the skeptics only wish to openly talk about the subject of climate science and to have a little public debate. Why are the warmists so afraid of a little open dialogue? Is their science so weak? Fear is hardly a sign of confidence.

If the German alarmists thought Fred Singer and the Heartland Institute were trouble, wait until they see Donna’s book about the IPCC. Expect a massive smear campaign by the alarmists soon. Hope you’ve got a thick skin, Donna.

So Donna, tell us who is really funding you? What about your ties to Koch Industries and to Big Oil? Surely you’re hiding them. And who is paying you all that money? Are you a climate scientist? Why do you spend so much time hanging out with all those deniers and attending their climate conspiracy conferences? Vee hav vays of finding these things out!

You’ve got a lot of explaining to do, young lady. 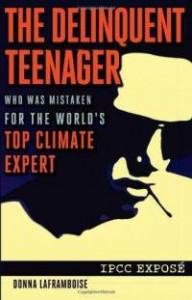 Vahrenholt’s and Lüning’s Die kalte Sonne website here and the European Institute for Climate and Energy (EIKE) here both have a small write-up on Donna’s book, The Delinquent Teenager Who Was Mistaken for the World’s Top Climate Expert, now being launched in German. They write:

On December 5, 2012, Candian IPCC critic Donna Laframboise is making a presentation at 7 p.m. in Berlin. The topic: just exactly how objective is the IPCC, which was formed to act as a climate referee? The presentation is taking place at the Albrechtstr. 11 in the ‘Haus der Zukunft’ (1st floor). It’s open to the public and entrance is free. Space, however, is limited so it is best to be there early.

Donna Laframboise summarized her IPCC criticism in her book “The Delinquent Teenager Who Was Mistaken for the World’s Top Climate Expert”, appearing in 2011. It is strongly recommended. The book is now available in German at a price of € 19.90 at TvR media publishers: buch@tvrgroup.de.“

Reaction to this book is not going to be pretty.