The PIK has issued a press release on another one of its patently alarmist, statistically selective and manipulative studies, BASED ON MODELS, claiming the end of the world is near.  I’m sure this study will be shown to be preposterous in just a matter of days. No matter, the German media can hardly contain itself.

80 percent of observed monthly records would not have occurred without human influence on climate, concludes the authors-team of the Potsdam Institute for Climate Impact Research (PIK) and the Complutense University of Madrid. Monthly temperature extremes have become much more frequent, as measurements from around the world indicate. On average, there are now five times as many record-breaking hot months worldwide than could be expected without long-term global warming, shows a study now published in Climatic Change. In parts of Europe, Africa and southern Asia the number of monthly records has increased even by a factor of ten.

Record-breaking hot months have become much more frequent. (For full graphic see Fig. 4 in the study) Graphic: PIK
“The last decade brought unprecedented heat waves; for instance in the US in 2012, in Russia in 2010, in Australia  in 2009, and in Europe in 2003,” lead-author Dim Coumou says. “Heat extremes are causing many deaths, major forest fires, and harvest losses – societies and ecosystems are not adapted to ever new record-breaking temperatures.” The new study relies on 131 years of monthly temperature data for more than 12,000 grid points around the world, provided by NASA. Comprehensive         analysis reveals the increase in records.

The researchers developed a robust statistical model that explains the surge in the number of records to be a consequence of the long-term global warming trend. That surge has been particularly steep over the last 40 years, due to a steep global-warming trend over this period. Superimposed on this long-term rise, the data show the effect of natural variability, with especially high numbers of heat records during years with El Niño events. This natural variability, however, does not explain the overall development of record events, found the researchers.

Natural variability does not explain the overall development of record events

If global warming continues, the study projects that the number of new monthly records will be 12 times as high in 30 years as it would be without climate change. “Now this doesn’t mean there will be 12 times more hot summers in Europe than today – it actually is worse,“ Coumou points out. For the new records set in the 2040s will not just be hot by today’s standards. “To count as new records, they actually have to beat heat records set in the 2020s and 2030s, which will already be hotter than anything we have experienced to date,” explains Coumou. “And this is just the global average – in some continental regions, the increase in new records will be even greater.”

“Statistics alone cannot tell us what the cause of any single heat wave is, but they show a large and systematic increase in the number of heat records due to global warming,” says Stefan  Rahmstorf, a co-author of the study and co-chair of PIK’s research domain Earth System Analysis. “Today, this increase is already so large that by far most monthly heat records are due to climate change. The science is clear that only a small fraction would have occurred naturally.”

The paper unfortunately ignores the siting issues of modern temperature stations, most now located next to airport tramacs and within urban sprawl. The horror scenarios also contradict observed temperature trends and projections of further stgnation or even cooling in the next decade.

All climate models have been exposed as exaggerated

Joe Bastardi shows how observed temperatures over the last 30 years have been below all 38 model projections put out by a variety of “climate institutes.” The consensus of the models has been revealed as being dead wrong. Bold blue dots represent the observed trend: 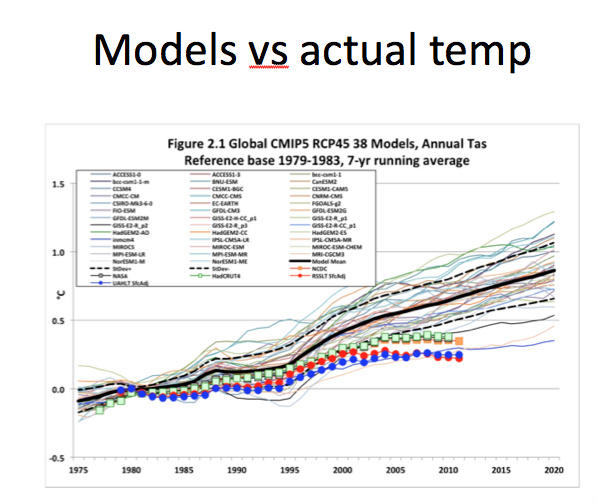 And it was just 2 years ago when PIK famously predicted global warming would lead to a cooling of the northern hemisphere. notrickszone.com/2010/11/17/postdam-global-warming-could-cool-temperatures/