Hans von Storch’s blogsite Klimazwiebel has a excellent article written by one of the world’s leading meteorologists, Lennart Bengtsson, who writes that the alarmist hype needs to be toned down, and that the problem of energy be taken more seriously.

Lennart Bengtsson, a warmist, is the former director of Germany’s Max-Planck Institute for Meteorology in Hamburg, which unfortunately has recently turned emotional and alarmist on the topic of climate change.

Here are some cherry-picked excerpts that pretty much set the tone of the article:

“Natural processes drive climate and practically all kinds of extreme weather have always been part of the climate and are practically unrelated to the modest warming we so far have had. The effect of increasing greenhouse gases is a slow but relentless process that will have to be dealt with but will require more time and better insight in key processes.”

“Since the end of the 19th century the global warming amounts to about ¾ °C. This is a very modest increase…”

“The lack of any significant warming in the tropical troposphere since the beginning of space observations in 1979 is particularly intriguing in particular as present models show a warming trend over the same time of 0.3-0.4°C in the average, figure 2.”

“…very emotional climate debate today…hardly possible to have a sensible and balanced exchange of views. If you do not support climate catastrophes…you are placed into a deniers box... Some of our colleagues are exposed to a powerful group pressure, …”

For Greenpeace and the WWF, “a threatening climate warming have become a necessity and a source of extra income.”

“…climate is in fact warming much slower than anticipated.”

“…lower tropical troposphere, 20°S –20°N, has only got about a third of the warming compared to what is predicted by present climate models.”

“There’s a need to rethink.”

Read it all here!

Dear Dr. Bengtsson, Why Is it CO2 And Not The Sun?

I have several problems with the assumptions made by Lennart Bengtsson in his article Global climate change and its relevance for a global energy policy, but this one is central to the whole argument, and it is a point I raised last week in my article Global Warming Has Peaked…Set To Switch To Cooling. “If You Look At History, This Is Easy To See”. All the CAGW Climatologists make a first, and nearly only, assumption that CO2 drives the global temperature to the exclusion of anything else. I just wish to point out the similarity between his Figure 1, and my graphs below. 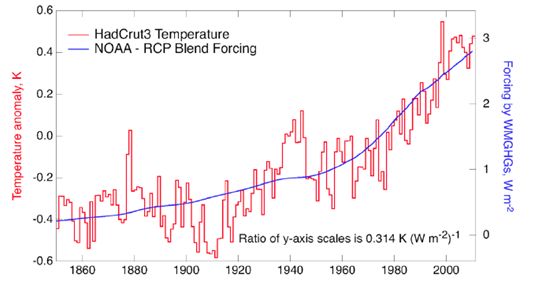 My question to Prof. Bengtsson: So which do you think is driving temperature? A response would be very much appreciated.