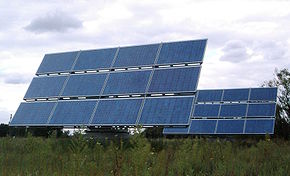 Once believed to hold the key to future jobs and prosperity, renewable energies in Germany are now emerging as a complete flop and a national embarrassment.

Coming on the heels of the solar industry collapse, now comes the end of the bio-fuel industry, so reports Die Welt.

Germany’s green industry collapse is happening faster than anyone could have ever anticipated, and has caught the media by surprise. Die Welt writes:

The German solar industry is dissolving faster than you can even see. One third of all companies disappeared from the market within one year. Solar power subsidies of more than 100 billion euros [$130 billion] over 20 years have led to only a mere flash in the pan. According to the official numbers, today there are barely 6000 employees in the German solar cell and module production.”

The cause of the solar energy collapse is in part due to the recent cuts in government subsidies (they’ve realized that it’s too expensive after all) and cheap imports from China.

Such is the miserable state of the solar industry in Germany. Wetzel then writes that also Germany’s highly subsidized bio-fuel industry is on the verge of collapse. In the link, Die Welt writes: “Biofuel production in Germany will likely completely collapse in just a few years.” and that leading German biofuel manufacturer Verbio AG in Saxony Anhalt “is deeply in the red for the first three quarters of its fiscal year” and that the company is reporting “a loss of 143 million euros since July 2012.”

What’s especially peculiar is that Die Welt, once (and still is) a big believer of man-made climate change and green energies, seems to have developed sudden amnesia concerning it’s earlier positions on the issue. In the past the leading national daily often wrote highly supportive articles of the green movement, and aimed harsh words at climate science skeptics and green energy critics. Apparently, at least in its latest article, Die Welt now thinks it can lecture readers on the virtues of critical thnking:

The fall of both sectors is a reason to critically question whether it’s possible to usher in high-tech industries and employment miracles by using subsidies.”

My, how profound. Such amazing words of wisdom….and all coming after a mere 20 years and € 100 billion having been squandered.

We all I recall many reports from Die Welt warning of the coming climate apocalypse, and cheerleading for alternative energies like sun and biofuel. Now the once-green conservative daily wants us to “critically question”? Sorry Die Welt but you’re about a decade late, and so you can take a seat in the back.

I’m not blaming Wetzel here, who surely has written some critical pieces. My criticism is aimed at Die Welt’s naive editors. Hopefully they’ve woken up to reality and will soon stop believing the climate fairy tales spread by the PIK and other activist institutes.