Watching the reaction from the greens, media, climate scientists, and a number of politicians here in Germany reminds me of the time when I was in 6th grade and a friend of mine and I threw a dead mouse in a group of 3rd grade schoolgirls out on the school yard. That sent them off in all directions screaming hysterically. 🙂 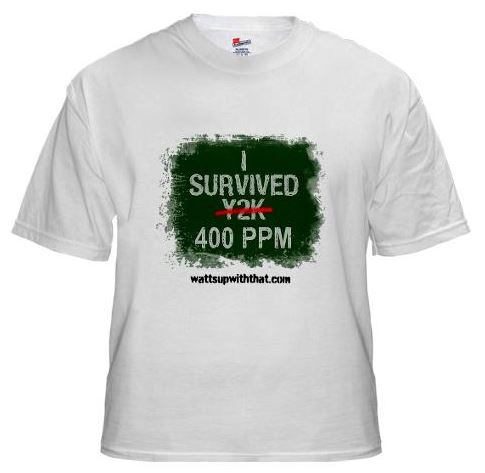 Order yours at: WattsUpWithThat

Well that’s pretty much the reaction we’ve seen with many of the adults (grown men) here in Germany when Scripps announced that CO2 concentration had reached the 400 ppm level. You see, the day before when the concentration was 399.99 ppm, everybody was just going about their business; life was normal. But when the CO2 concentration reached 400 ppm, the gates of hell opened.

As one of the few calm people here, I now find myself busy dispensing on-site counseling to the emotionally shocked and hysterical in the report’s aftermath, and so I don’t have so much time. But here’s some reaction we’ve seen over the last few hours from the media, greens and “leading scientists”:

Exceeding the 400 ppm threshold of CO2 concentration in the atmosphere symbolizes the drama of galloping climate change and the threats to our civilization connected with it. […] To avert the unimaginable consequences of a continued dramatic increase in CO2, immediate and effective climate protection must have top priority!”

The leftist daily TAZ quoted Ralph Keeling of the Scripps Institution of Oceanography in San Diego [translated, not the original quote]:

‘We are moving into dangerous territory,’ said Ralph Keeling of the Scripps Institution of Oceanography in San Diego. […] In his view the efforts to reduce CO2 have failed. Some impacts of climate change are now irreversible.”

The CO2 concentration in the atmosphere has reached a historical high. […] Policymakers have to finally take action.”

Stephan Bakan of Max Planck Institute for Meteorology in Hamburg (via klimaretter.de):

The climate models show that independent of short-term fluctuations, the global mean temperature of the lower atmosphere continues to rise with increasing CO2 concentration. With every increase we are moving towards the 450ppm level. And the time remaining for effective emissions reduction reduces accordingly.”

450 ppm? At least now we know when to expect the next outbreak of mass hysteria.

Jelle Bijma of the Alfred Wegener Institute for Polar and Ocean Research in Bremerhaven, reported by klimaretter.de):

With this we surpass the 400 ppm mark for the first time in 25 million years. […] The Earth’s climate does not fundamentally react to the rise in CO2 in a linear fashion, explained Bijma. However there seems to be a relationship: The continued increase in greenhouse gas concentration as a whole strengthens the tendency to warming of the atmosphere. The higher the CO2 concentration, the graver are the consequences of climate change.”

The German Green Party wrote at their site:

Reaching the 400 ppm mark and the foreseeable increase in CO2 concentrations mean a much warmer world, and foremost a more volatile world connected with a sea level that is meters higher. […] It has probably been 3 million years since CO2 concentrations have been so high. […] To avert the consequences of a further dramatic increase in CO2 emissions, we must immediately and effectively protect the climate.”

There’s much more of course. But I’ve got to get back to calming the hysterical here. I’m telling them that over the Earth’s history CO2 have meandered over a broad range of 180 ppm to as high as 7000 ppm. At 150 life really starts having problems. During the ice ages we were dangerously low, below 200 ppm. At 400 ppm we now at least have a small buffer against extinction.

At the moment they are blocking it all out, of course. But tomorrow when they wake up, they will see that the earth is still there. It’s a slow process that moves one step at a time. They’ll wake up 5 mornings in a row, then do so for a whole year, and then for a decade, and more, and the world will still be there. Most by then will have relaxed and returned to a functional life.