To mark the start of the new decade, NoTricksZone and its readers made a climate bet (see right side bar) against two warmists from Skeptical Science: Rob Honeycutt and Dana Nuccitelli (and others). Also see update-5. The warmists are pledging more than $14,000.00!

Rob overall has been a good sport and is a pleasure to deal with. Dana, on the other hand, has been, shall we say, a bit abrasive. 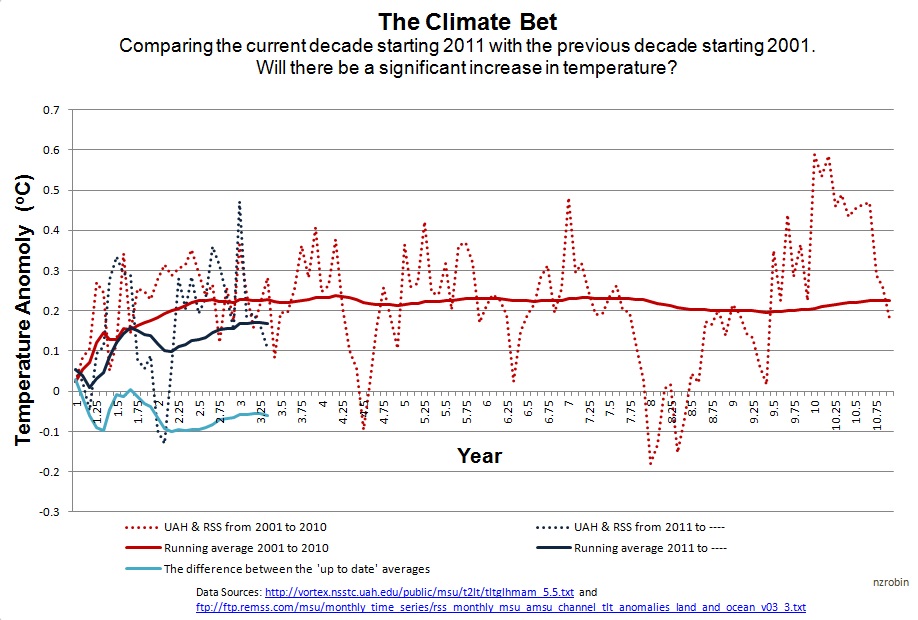 The coolists are clearly in the lead. Chart by Robin Pittwood – Kiwi Thinker

The bet is on whether or not the current 2011-2020 decade would be warmer or cooler than the previous 2001-2010 decade. NTZ and its readers say it will be cooler or the same. Messieurs Honeycutt and Nuccitelli say it’s going to get warmer for sure. After all, man is spewing more CO2 into the atmosphere than ever. The money won will be donated to a charity for children in need.

Almost two and half years have now passed and I think it’s a good time to see how the bet is coming along. Thanks to Robin Pittwood and his Kiwi Thinker blog, we now have preliminary results for the first 2 years and 5 months.

Clearly in the chart above we see that the current decade is running a bit cooler than the last one. In fact, temperatures haven’t warmed in 15 years.

Of course it’s still early and nobody really knows what tricks Mother Nature could play. But Rob and Dana really should be scratching their heads, though. Okay, the bet was made before they found out that oceans eat up warming. Indeed it is warming, they insist, but the cooling is just covering it up! You just wait…the warming will be back, they keep saying. And when it comes back, it’ll be for real. Besides, cooling is caused by warming anyway. Right?

Problem is, nobody knows when the warming will be back. Even the Prince of Global Warming Darkness himself, Hans-Joachim Schellnhuber of the Palace of Doom and Gloom in Potsdam recently said the warming may be delayed even another decade. Doesn’t look good, Rob and Dana.

Like I wrote, it’s remotely possible that it will warm a bit this decade, and maybe Rob and Dana could even eke out a victory. But will a few hundredths or even a tenth of a degree be enough?

Not really because of the model projections are rising much faster and the divergence between observed temperature and model projections will be more glaring than ever. Even if the two do pull off an upset, it’ll be a hollow victory. They’ll still have lost the science argument, which is all about sensitivity. By the end of the decade, it could be that we will not have seen any significant warming in over 22 years.

Temperature would have to jump 0.4°C in the next 7 years just to be at the lower range of the model projections. Chart: www.drroyspencer.com/

To be on the safe side, I’ve asked Robin Pittwood to disclose his calculations and the data he used to produce his non-hockey stick chart.

First he told me he had lost the data, then he told me that it was private property and that I was not privy to it. Next he said it was not covered by the Freedom of Information Act, and so he didn’t have to provide it. He also asked why he should provide it to me if my sole aim was just to find something wrong with it. Then he said I had to be a scientist to see it. During all of this he told the press that I was just a hack of Big Oil and the coal industry. But I never relented, and so he eventually coughed it up. /sarc 🙂