Anthony Watts’s site has already announced that Fritz Vahrenholt’s and Sebastian Lüning’s bestselling German book “Die kalte Sonne” can now be pre-ordered in English under the title:  “The Neglected Sun“. 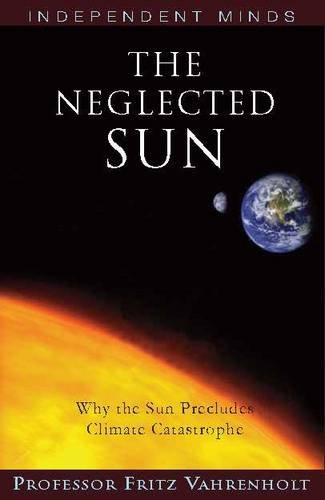 The Neglected Sun” is now available for pre-ordering at Amazon (US). Check the Amazon site for your country on how to order. You should also be able to order at most major bookshops. Image: Stacey International

This is the book that sent shock waves across the German climate science establishment, causing many media outlets to fret that the end of the world may not be coming after all.

Vahrenholt’s and Lüning’s book claims that the climate models have been hopelessly distorted by IPCC scientists, and that these models irresponsibly exaggerate the impact of CO2 on our climate.  The authors support their assertions with a crushing load of scientific evidence stemming from hundreds of peer-reviewed papers; they cite over 900 sources – most peer-reviewed. Their conclusion: The sun plays a far greater role in driving climate than what the IPCC would have us believe.

Vahrenholt, a professor of chemistry, was once a big believer in the IPCC’s science. The high profile professor and Environment Minster of the City Of Hamburg was made CEO of German power giant RWE Innogy, the renewable energy arm of the company. His job: To put the power giant on the path to renewable energies. Vahrenholt led the installation of massive offshore windparks. No one has been responsible for installing more wind power in Europe than Vahrenholt.

But after just a few short years, RWE was surprised by the much lower than expected results – as if the wind in northern Europe had gone into the doldrums.  RWE demanded an explanation from Vahrenholt, who had relied on wind forecasts from experts. In search for an answer Vahrenholt found a paper by Lockwood that showed Europe’s climate was strongly correlated with solar activity and that it was in part responsible for the wind doldrums.

In December 2009, Vahrenholt was asked by the IPCC to review the draft report on renewable energy. He was horrified by what he had found: 293 errors and deficiencies in the 1000+ page report. Worse, in February 2010 at a Washington D.C. meeting of IPCC experts, no one refuted these errors. He asked himself: “Could it be that the same sloppy approach was used for the core area of climate protection?”

RWE colleague Dr. Sebastian Lüning, a geologist, gave Vahrenholt a copy of Andrew Montford’s The Hockey Stick Illusion. Vahrenholt tore through the book in a matter of days and dug deeper into the science. He was shocked by the deception and distortions he found in the IPCC literature. This is what eventually led Lüning and Vahrenholt to write Die kalte Sonne.

Many readers here have asked if and when the book would be printed in English. Now I’m pleased to say that the the printing presses are gearing up to print in English.

The English version is considerably updated and includes newer literature and developments, which not surprisingly confirm Vahrenholt’s and Lüning’s suspicions of reduced CO2 climate sensitivity.

Actually The Neglected Sun has turned me into a mild luke-warmer. The evidence presented in the book does not dispute the greenhouse properties of CO2, and shows that they are real and are a factor, but that they are quite exaggerated. Vahrenholt’s and Lüning’s conclusions are actually not far from those of many serious climate scientists.

It’s emerging that Vahrenholt and Lüning are turning out to be correct with their assertions on CO2 climate sensitivity. You’ll can read all about it. The English version has been changed around a bit, and I assure you that you will not be able to put it down after the first short introductory chapter.