Germany has ambitious plans of erecting huge offshore wind parks in the North and Baltic Seas with the hope of generating lots of natural, climate-friendly energy. The Riffgat offshore wind park, comprising 30 monster turbines located some 15 kilometers from the North Sea island of Borkum, is such a wind park. 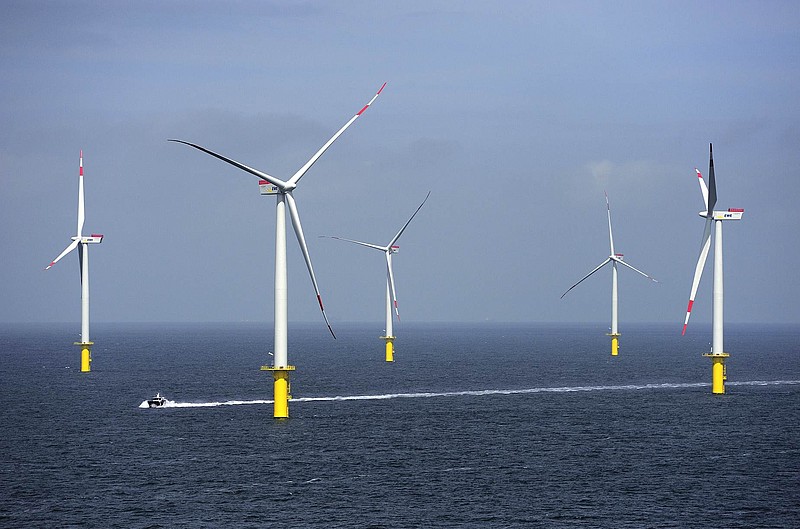 The Riffgat offshore wind park has no transmission lines to take the power onshore. More than 22,000 liters of diesel fuel are needed each month to keep the idled turbines from rusting away. Photo source:www.riffgat.de.

The dream is that Riffgat will power tens of thousands of homes and businesses with clean energy, and so become a model for the rest of the world. And now that construction of the wind park is finished, the dream also includes leading politicians inaugurating the wind park amid massive media attention, and thus looking like responsible heroes who are rescuing the planet.

That was the dream.

But now comes the reality. Number one German daily Bild here reports that the wind park is indeed complete, but it isn’t going to be supplying any green energy anytime soon. Bild writes:

The wind turbines aren’t operating, They are not allowed to run. This is because the wind park is still not hooked up to the power grid. 15 kilometers of the 50 kilometers of underwater power cable needed to connect the park to the mainland are still missing!

And because the wind park is not allowed to remain idle, diesel generators must keep the wind park in motion: The sensitive motors that are to convert the wind into energy must run continuously. Otherwise there’s a threat of corrosion from the salty air.

The consumption is enormous: According to BILD information Riffgat needs over 22,000 liters of diesel. A month!”

It isn’t possible to lay the last 15 km of sea cable because that section of the seabed is still littered with old bombs from WWII. Special ships are required to find and defuse the old munitions. Unfortunately these ships are booked out and it’s going to take months before any become available. Bild adds that the park isn’t going to get hooked up until February 2014 at the earliest.

Until then, and likely much later, 22,000 liters of diesel fuel will be burned each and every month to keep the turbines from rusting away.

11 responses to “Windpark To Nowhere…22,000 Litres Of Diesel Fuel Burned Every Month To Keep Windpark From Rusting Away!”