Browse: Home / 2013 / October / 17 / Climatology Sees One Of The Greatest Scientific Reversals Of All Time – The Rise And Fall Of The Hockey Stick Charts

The Intergovernmental Panel on Climate Change (IPCC) was created in November 1988 by the United Nations Environment Program (UNEP) and the World Organization for Meteorology (WMO). The main task of the UN Climate Framework  Convention (UNFCCC) was to assess the risks of global warming and to draw up mitigation strategies. One important role was to determine the global climate development over the last 1000 years in order to see if the warming of the last century was “unique” and to see if today’s supposed manmade warming was a threat.

An examination of the five IPCC reports published thus far reveals a remarkable scientific reversal. What follows is the evolution of the 1000-year temperature curve: from double hump (1990) – to hockey stick 2001) – and back again to double hump (2013).

In the First Assessment Report of 1990, page 202 depicts the following chart: 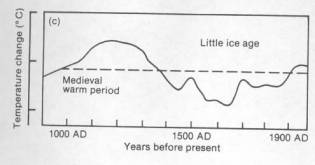 In Figure 1 we see that the period of the 11th to 13th century, the Medieval Warm Period, was considerably warmer than today. The above graphic appears to be based on the publication from LAMB from 1965, H. H. LAMB, 1965, THE EARLY MEDIEVAL WARM EPOCH AND ITS SEQUEL Palaeogeography, Palaeoclimatology, Palaeoecology. The climate data were taken from Central England and extend up to 1970.

But already in the Second Assessment Report of 1995 the curve looks much different. On page 174: 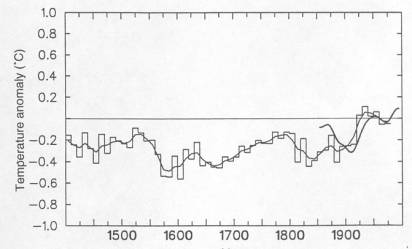 And instead of showing the last 1000 years, as the section title states, the chart starts only in the 15th century, i.e. exactly at the end of the Medieval Warm Period. And there’s another oddity that stands out: The drawn mean curve does not match the depicted temperature curve.

In the Third Assessment Report of 2001 the following curve was presented by the IPCC (as to Mann, M.E, R.S. Bradley and M.K. Hughes (1998) Global-scale temperature patterns and climate forcing over the past six centuries.- NATURE, VOL 392, 23 April). In the literature often cited under (Michael E. Mann and Raymond S. Bradley (1999). Northern Hemisphere Temperatures During the Past Millennium: Inferences, Uncertainties, and Limitations) (original chart in Figure 3). 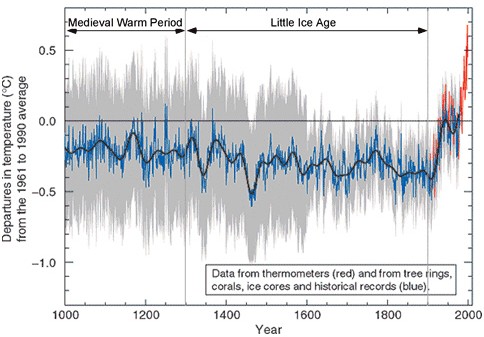 In a single stroke the Medieval Warm Period gets deleted altogether. The chart shows a relatively stable climate all the way up to 1900 with an overall slight cooling tendency. This then gets followed by a dramatic temperature increase. It became known worldwide as the “Hockey Stick chart”. It was cited endlessly, often times without the gray zone of uncertainty – for example in Al Gore’s An Inconvenient Truth movie.

However, the chart became highly criticized because of the methodology employed by lead author Michael Mann. The methodology produced a hockey stick no matter what data were input. Even today Mann refuses to fully disclose the method he employed. Moreover, it was determined that the tree-ring data methodology suppressed the climate jumps of the past. Furthermore the reconstructed data was simply truncated at 1980 and replaced by the instrumental data. This was done because the data derived from the tree-rings did not deliver the desired temperature rise at the end of the data series.

In the Fourth Assessment Report of 2007 on page 467, the IPCC presented a new climate spaghetti curve.

It contained the hockey stick curve of Michael Mann (MBH1999), which however was only one of many. New temperature reconstructions depict once again more or less a pronounced Medieval Warm Period.

The Fifth Assessment Report has been just released. In it the IPCC now shows the following Figure 5.7 climate curve, a new spaghetti chart:

Here we now clearly see that Michael Mann’s hockey stick curve of 1999 has disappeared altogether. The new temperature reconstructions once again show a very pronounced Medieval Warm Period, thus rehabilitating the MWP of the First Assessment Report from 23 years ago. Today’s warming, it turns out, is nowhere near as dramatic as it was claimed for a long time.

Michael Mann’s hockey stick curve of 1999 is not the only climate curve that has disappeared from the 5th Assessment Report. Also Keith Briffa’s curve from 2000 and 2001 have disappeared. The following may be the reason they have disappeared.

Michael Mann’s hockey stick chart from 1998 uses reconstructed proxy data only until 1980. Mann writes in his 1998 publication: “the training interval is terminated at 1980 because many of the proxy series terminate at or shortly after 1980)”. This truncate-and-substitute trick is even mentioned in one of the Climategate e-mails from Phil Jones (Director of the Climate Research Unit): “I’ve just completed Mike’s Nature trick of adding in the real temps to each series for the last 20 years (ie from 1981 onwards) amd from 1961 for Keith’s to hide the decline.”

Keith Briffa (CRU) also used the truncate-and-substitute trick. The Briffa reconstructions from 1998 (as well as 2000, 2001) extended only up to 1960 even though the reconstructed data ranged from 1402 – 1995. This is explained as follows in an internal e-mail: “The data are attached to this e-mail. They go from 1402 to 1995, although we usually stop the series in 1960 because of the recent non-temperature signal that is superimposed on the tree-ring data that we use.”

Figure 6 shows Keith Briffa’s reconstruction. The data from the reconstruction extends all the way to 1995 (red curve included). But the red part of the curve (1961-1994) gets deleted because it does not show any real warming and gets replaced by instrumental data from weather stations (green, 1871-1997) . This trick was used to conceal the drop in temperature at the end of the reconstruction and to cover up the considerable discrepancy with the instrumental data of the weather stations, i.e. “to hide the decline”.

The same was done with Michael Mann’s reconstruction, which got chopped off at 1980.

Without the work of the “climate skeptics”, one of the greatest scientific reversals of the last century very likely would have never taken place.