“Payments for renewable energy will cost each household on average about 1 euro per month – that’s as much as one scoop of ice cream.”  That’s what Jürgen Trittin, former Federal Environment Minister, Green Party, said in July 2004 when Germany’s EEG renewable energy Feed-In Act) was enacted.

“Now it costs as much as every item on the entire ice cream menu,” said Peter Altmaier, current Federal Minister of Environment, September 2013 at the 8th German Energy Congress “Energy Economy in Transition”.

Recently a press release from power grid operators 50Hertz, Amprion, TenneT and TransnetBW (link) was issued. Here is what it announced:

For the year 2014 another considerable increase in the generation of renewable electrical energy is projected. The increase of approximately 15 terawatt-hours(from about 135 TWh in 2013 to almost 150 TWh in 2014) is mainly from onshore wind, offshore wind, and photovoltaic.

The following chart depicts the cost development for consumers from the EEG feed-in tariff, from 2003 to 2014, (eeg-kwk.net): 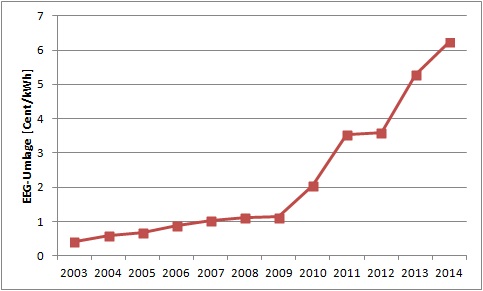 The next figure shows the electric power price development in Germany (Statista):

So much for renewable energies staying affordable, as politicians promised us just some years ago.

What follows are more famous quotes from politicians and hustlers, all telling the consumers how renewable energy would stay cheap and affordable for every German. You be the judge on whether or not they were truthful.

….The costs to be paid by consumers for the Feed-In Act (EEG fees)) will remain practically constant compared to the current level.”

The increase in the EEG feed-in tariffs will reduce in the future and will not cost more than 3 euros a month, even with a very dynamic expansion. The feed-in rates will then start to go down by the middle of the next decade.”

Already today consumers are saving significantly more than they are paying for the EEG feed-in act. The huge supply of energy from wind, water, sun, bioenergy, and geothermal is leading to a dampening effect on the price of electricity, this according to the Federal Association of Renewable Energies, BEE.”

Because of the EEG feed-in act, the feed-in cost for electricity will rise a bit. According to the law that applies, it will increase to a maximum of about 1.4 cents/kwh by the year 2015, after which it will again drop.“

In 2013 the EEG fee will rise to a whopping 6.24 cents/kwh, and there is no end in sight for the spiraling costs.

Today we know that figure will rise to 6.24 cents/kwh next year with no slowdown in sight.

The EEG feed-in cost for 2011 according to a current study of the German Ministry of Environment (BMU) will be about 2.8 cents. The study looks at the ‘long-term scenarios and strategies for the expansion of renewable energies in Germany while taking the development in Europe and the globe into account’, and also sees no exploding EEG feed-in costs for the coming years.”

Angela Merkel on September 6 in a government address:

The EEG feed-in costs must not rise more than today’s levels; today it is at about 3.5 cents/kwh. Over the long-term we want to significantly lower the payment for electricity coming from renewable energies.”

The expansion of renewable energies will lead to very little price increases for the consumers.

(…) After 2020, however, we expect renewable energies to become an important share and will stabilize the prices, and thus we will experience a dampening in electricity prices.”

The EEG feed-in cost will surge to 6.24 cents/kwh next year. There are no signs of a price slowdown.

We are not paying for the transformation over to renewable energies from petty cash.”