Josef Kowatsch of the European Institute for Climate and Energy (EIKE) has issued a press release informing that there’s been no increasing temperature in Germany in 17 years! 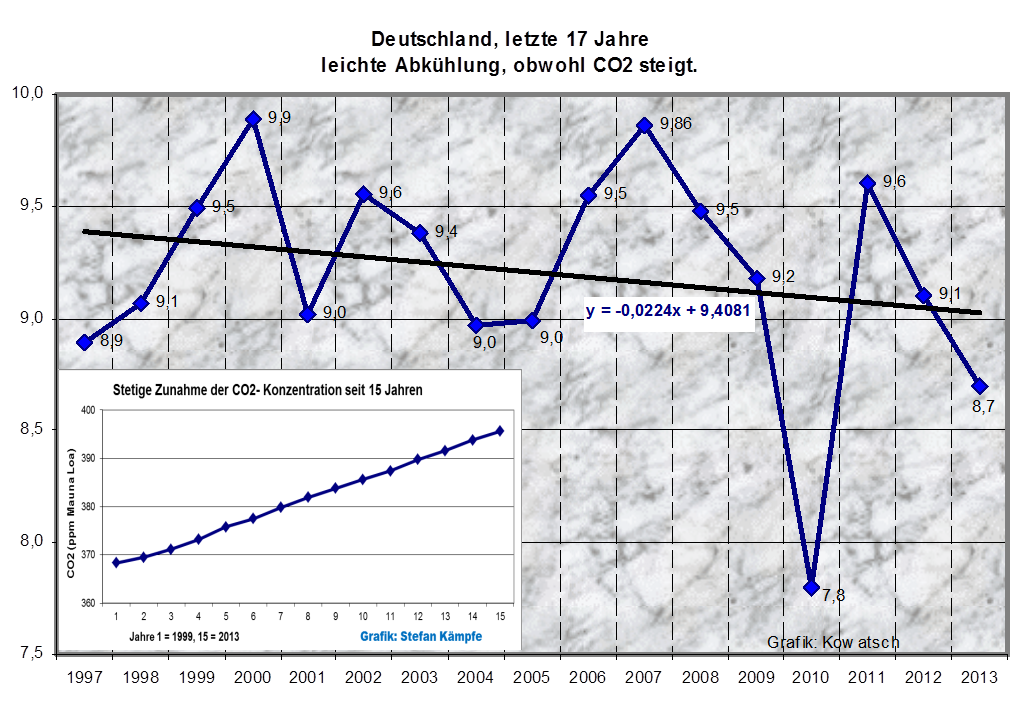 Even though CO2 concentrations are increasing, annual mean temperature in Germany is cooling. Originally a warming of 0.4°C per decade was announced. Instead a cooling of more than 0.2°C per decade has actually been observed! Chart by J. Kowatsch, data from the German Weather Service (DWD).

Especially in Germany over the last 20 years people have been told to fear ever more threatening dangers from increasing climate change. Self-proclaimed “climate experts” from reinsurers and high-paid climate scientists have been falling all over each other in delivering bad news year after year. Cities and communities are instructed to fight the already started and supposedly worsening climate warming, otherwise there’s the threat of a climate collapse showing up in the near future. “Fight climate change!“ is the motto that is now being used – as if the entire country were on a war footing. The enemy: man-made CO2.

But the reality is very different. Even though December 2013 has been mild, the annual temperature for 2013 is only 8.7°C , the second coldest in 17 years.  In nature, using temperature, the religiously repeated belief of a strongly warming greenhouse effect as a consequence of man-made CO2 is nowhere in sight.

The fact is: CO2 values are rising, but temperatures in Germany have been falling 16 years and the trend has been down for 17.