Share this…FacebookTwitterUPDATE: wnd.com/2014/01/the-thermageddon-cult-9 Like a number of readers, I’m also quite puzzled by what is going on here. Maybe someone could fill us in on the background. It’s not the kind behavior we want to have. We’d prefer to see the long knives returned to the drawer. Again I’m not taking any sides. But I […]

Share this…FacebookTwitterUPDATE: I’m amazed by the level of emotion out there. Makes you wonder how science can be possible at all in such an emotionally charged environment. A word to the wise: Those who live by the sword, die by the sword. More fallout!: 1. wattsupwiththat 2. tallbloke’s talkshop ============================= There are lots of accusations […]

Share this…FacebookTwitterHistory is chock full with doomsday scenarios, peddled by profiteering charlatans, scenarios that time and again keep getting postponed decades into the future. Man running out of oil in 20 years has been around for a century. The claim still keeps getting made even by people who really should know better. And every time […]

Share this…FacebookTwitterAn attempt by a group of climate science skeptics to perhaps bypass climate-science gate-keeping and marginalization used against their scientific hypotheses has taken a turn for the worse, with accusations of “nepotism” within the peer-review process at the PRP journal. Jo Nova has a new post on the situation, implying that peer-review is a […] 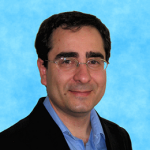 Share this…FacebookTwitterA number of websites have thoroughly and deservedly thrashed Germany-based Copernicus Publications for terminating one of its scientific journals: Pattern Recognition in Physics. Read here, here and here. The reason for terminating the entire publication was an IPCC skeptical paper titled: General conclusions regarding the planetary–solar–terrestrial interaction, authored by an impressive roster of leading maverick […]

Share this…FacebookTwitterSlowly, almost imperceptibly, but surely, the once diehard the-science-is-settled mainstream media are conceding that the climate debate isn’t over after all – and likely not by a long shot. And if you pay attention, you can see them quietly opening that back door for the quick exit. The cracking started long ago, and now […] 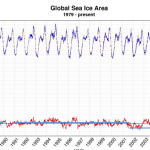 Share this…FacebookTwitterGlobal sea ice is supposed to be melting away. We are often led to believe that it is at or near record lows. It’s global warming after all, and everyone knows that warmth melts ice. But if ice is growing, maybe it’s a sign that things are cooling down. From the chart that follows we […]

The Stages Of The Warming Hiatus Reaches New Level: From Nothing, To Noise…And Now To A Full Blown Trend, Nature Concedes!

Share this…FacebookTwitterNature here today has a commentary acknowledging that the warming pause is real and that it has grown into a full blown trend – it is no longer just noise! “Sixteen years into the mysterious ‘global-warming hiatus’, scientists are piecing together an explanation.” Hat/tip: Barry Woods. Nature writes: The biggest mystery in climate science […]

“97%” Of The Climate Scientists Have Been Wrong For 16 Years – But We Should Still Listen To Them?

Share this…FacebookTwitterToday I would like to debunk the claim that we have to act now because there’s a “97% consensus”. In debates I keep hearing the claim that “97% of scientists agree” on global warming science and thus, with such an overwhelming consensus, taking action is a no-brainer. For example Hollywood actor and college dropout George Clooney recently […]

Andrew Revkin, If It Wasn’t For Black Carbon Nobody Would Be Prosperous Enough To Buy Your Music

Share this…FacebookTwitterI see New York Times science journalist Andrew Revkin has applied his musical talent to record and release a song criticizing evil black carbon: I’m still trying to figure out people like Revkin. They constantly rail against the very things that make their lives pleasant, safe and fulfilling. To me it’s as rational as hating […]

Share this…FacebookTwitterGermany’s Der Spiegel writes here that the EU is moving to abandon its ambitious climate protection targets. This, Spiegel writes, is now a real threat to Germany’s much ballyhooed Energiewende (energy transformation to renewable energies). The EU used to be a leading, unrelenting proponent of CO2 emissions reduction, even often ostracizing other industrial nations like the USA for […]