Browse: Home / 2014 / March / 19 / Decarbonization Can Only Have Marginal Effects On Future Climate At Best. Ultra-High Price For Negligible Results

This essay examines quantifiable and hopefully non-contentious aspects of the question.

The temperature-increasing capacity of atmospheric CO2 is known and widely accepted to diminish as its concentration increases.

Global warming advocates and climate change skeptics both agree on this. IPCC published reports acknowledge that the effective temperature increase caused by growing concentrations of CO2 in the atmosphere radically diminishes with increasing concentrations. This information has been presented in the IPCC reports, yet it is well disguised for any lay reader, (TAR3, Chapter 6. Radiative Forcing of Climate Change: section 6.3.4 Total Well-Mixed Greenhouse Gas Forcing Estimate) . It is not acknowledged in their Summary For Policymakers.

The rapid diminution effect is an inconvenient fact for global warming advocates, nonetheless it is well understood within the climate science community, but it is certainly not much discussed. This logarithmic diminution effect is probably the reason why there was no runaway greenhouse warming caused by CO2 in earlier eons when CO2 levels were known to be at levels of several thousands ppmv.

– Up to 200 ppmv, the equivalent to about 82% of the temperature increasing effectiveness of CO2, is essential to sustain photosynthesis in plant life and thus the viability of all life on earth.
– A further 100 ppmv was the level prior to any industrialisation, this atmospheric CO2 made the survival of the biosphere possible. It was responsible for a further 5% of the CO2 greenhouse effect.
– Following that, a further 100 ppmv, (certainly man-made in part), adding 4.1% of the CO2 effectiveness brings to the current level 400 ppmv.
– CO2 at 400 pmmv is already committed and immutable. So CO2 has already reached about 90+% of its potential warming effect in the atmosphere.

Both skeptics and the IPCC publish different views of the reduced effect on temperature of as  CO2 concentration rises.  Theses alternates are closely equivalent proportionally but vary in the degree of warming that is attributable to CO2. The range is from 3.13°C to 14.55°C.  The graphics showing IPCC published views on the diminution below:

Figure 2: Temperature as a function of Co2 concentration.

A comparison between all four estimates are set out below in the context of the whole approx. 33°C greenhouse effect.  This graphic shows the remaining temperature effect of CO2 in orange that could be affected by global decarbonisation policies.

It is anachronistic that some of the IPCC data sets shows very large proportions of the temperature effect attributable to CO2. The concomitant effect of those higher levels of CO2 warming is that the proportion of the total approx. 33°C then attributable the water vapour and clouds in the atmosphere is reduced so as to be unrealistically low.

Is it plausible that CO2, a minor trace gas in the atmosphere, currently at the level of ~400 ppm (0.04%) achieves such radical control of global temperature when compared to the substantial and powerful Greenhouse Effect of water vapour and clouds in the atmosphere?

Global warming advocates stipulate that all increases in the concentration of CO2 are solely man-made. This is not necessarily the case, as the biosphere and slightly warming oceans will outgas CO2. The man-made CO2 contribution at maximum is only a minor part of the CO2 transport within the atmosphere, at ~3% of the total [i]. The recent IPCC report now admits that probably increasing CO2 levels are only approx. 50% man-made.

There are the clearly divergent views of the amount of warming that can result from additional CO2 in future, but even in a worst case scenario whatever change that may happen in future can only ever have a marginal effect on global temperature.

So any de-carbonization policy, however widely applied, trying to control CO2 emissions can only ever achieve a minor future temperature reduction.

Whatever political efforts are made to de-carbonize economies or to reduce man-made CO2 emissions, (and to be effective at temperature control those efforts would have to be universal and worldwide), those efforts can only now affect at most ~10-11% of the future warming potential of CO2.

Decarbonization policies could never have any useful impact to realistically control any rising world temperatures and the future world climate.

As the future temperature effect of increasing CO2 emissions is now so minor, there is no possibility of ever attaining the much vaunted political target of less than +2.0°C by the control of CO2 emissions.

It is likely that any current global warming is largely a natural process, is within normal limits and is probably beneficial.

The probability is that any current global warming is not man-made and, in any case, it could be not be influenced by any remedial action, however drastic, taken by a minority of nations.

In a rational world, that prospect should be greeted with unmitigated joy.

To quantify what may be achieved by political action for de-carbonization by Western economies, this comparative table below shows the remaining effectiveness of each 100 ppm increment up to 1000 ppmv, with the total global warming in each of the four diminution assessments.

Figure 4: Little impact for  trillions of dollars in cost.

The table below shows the likely range of warming arising from these divergent (sceptical and IPCC) views, (without feedbacks), that would be averted with an increase of CO2 for the full increase from 400 ppm to 1000 ppm. This table assumes that the amount of CO2 released by each of the world’s nations or regions is reduced universally by some 20%: this is a radical reduction level but conceivable. 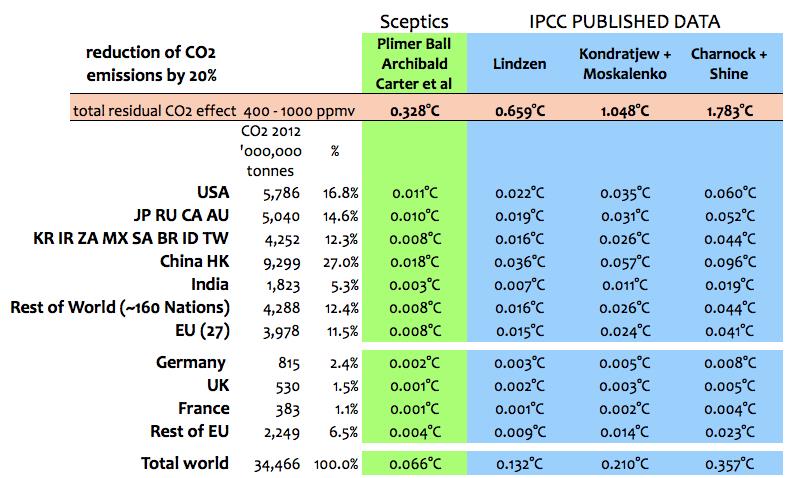 The results above for countries and country groups show a range for whichever scenario of only a matter of a few thousandths to a few hundredths of a degree centigrade. However it is extremely unlikely that the developing world is going to submit to non-development on the grounds of reducing CO2 emissions. So it is very likely that the developing world’s CO2 emissions are going to escalate no matter what is undertaken by developed nations.

These figures show that whatever the developing world does in terms of increasing CO2 emissions, the outcome is likely to be non-beneficial.

The extreme, economically destructive and immensely costly efforts by participating nations to reduce temperature by de-carbonization should be seen in context:

As the margin of error for temperature measurements is about 1.0°C, the miniscule temperature effects shown above arise from the extreme economic efforts of those participating nations attempting to control their CO2 emissions.  Thus the outcomes in terms of controlling temperature can only be marginal, difficult to detect and thus irrelevant.

The committed nations by their actions alone, whatever the costs they have incurred themselves, may only have virtually an undetectable reduction on world temperature.  So it is clear that all the minor but extremely expensive attempts to limit CO2 emissions undertaken by a few convinced western nations will in the end be inconsequential.

Motivated by the precautionary principle to avoid dangerous anthropogenic climate change, attempts to modify the climate through reducing CO2 emissions may turn out to be futile.  The stagnation in greenhouse warming observed over the past 15+ years demonstrates that CO2 is not a control knob on climate variability on decadal time scales.”

and paraphrased “doing nothing for fifty years is a much better option than any active political measures to control climate.”

It remains absolutely clear that our planet is vastly damaged by many human activities such as:

The world indeed should be strenuously finding ways to improve these situations.

But the unwarranted concentration on reducing CO2 emissions has deflected even well-meaning green activists and green-indoctrinated politicians from these more immediate and more worthwhile objectives.

As global temperatures have already been showing stagnation or cooling [v] over the last seventeen years, the world should fear the real and detrimental effects of global cooling [vi] rather than being hysterical about limited, beneficial or now non-existent warming [vii].

It is clear that all the minor but extremely expensive attempts by the few convinced western nations at the limitation of their own CO2 emissions are inconsequential.

The IPCC acknowledges that the diminution effect with increasing CO2 concentrations exists, but it does not explain its consequences. Like the Medieval Warm Period that the IPCC attempted to eliminate with the hockey stick graph in 2001, the IPCC knows that wide public knowledge of the diminution effect with increasing CO2 concentration would be entirely detrimental to their primary message.

It is increasingly clear that policymakers and global warming advocates have long been headed down the wrong path.

Matt Ridley has a clear opinion on this:

So we are doing real harm now to impede a change that will not produce net benefits for 70 years. That’s like having radiotherapy because you are feeling too well.”

Richard Lindzen, the Alfred P. Sloan Professor of Meteorology at the Massachusetts Institute of Technology, said it all [xv]:

Future generations will wonder in bemused amazement that the early twenty-first century’s developed world went into hysterical panic over a globally averaged temperature increase of a few tenths of a degree, and, on the basis of gross exaggerations of highly uncertain computer projections combined into implausible chains of inference, proceeded to contemplate a roll-back of the industrial age.”

On the other hand, a cooling world as both Hemispheres have seen in the years since the turn of the millennium leads to much more dire consequences for the biosphere and mankind, than any realistic amount of warming that could arise from man-made CO2 emissions. The damage can be seen from the current 2014 winter weather in North America, Asia and Siberia and the significant cooling winters across Europe up to 2013.

Cold is a much greater threat than any moderate amount of additional warmth that would ever result from the release of Man-made CO2. National policy makers and the United Nations are neither recognizing nor are they preparing for a cooling eventuality.

With a quietening sun, changing ocean circulation patterns and the growing evidence of much colder winter weather in both Hemispheres, that cooling could already be upon us [xvi]. The cooling climate could well last for many decades or even centuries.

16 responses to “Decarbonization Can Only Have Marginal Effects On Future Climate At Best. Ultra-High Price For Negligible Results”