Early this week a German meteorologist tweeted that Germany had set a new record high for the date in the southern state of Baden Wurttemberg at a station called Rheinstetten. I was even told that the station was fairly new (and thus reliable?).

I’ve noticed that on hot days the Rheinstetten station always appeared to be at or near the top of the list for high temperatures, and so I decided to see if I could get more details about its actual siting to find out more on why this is so.

It turns out that the Karlsruhe Institute of Technology (KIT) maintains the station and provides a good website with important station information. The simple map provided by the KIT site shows the station location (blue arrow) and that it is situated at the southwest end of a glider airfield. 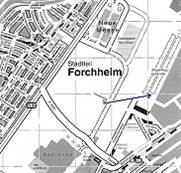 From the map we see that it is at least in a rural location. An aerial satellite view from Google Maps gives us much more detail:

The yellow circle in the photo above shows the suspected location of the station. Its location was deduced by examining the photos of the station available at the KIT site. 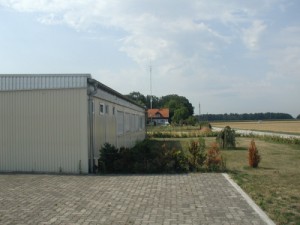 At the front of the photo we also see a pavestone surface, some 12 meters away from the station mast. Roads are located near the mast as well. They appear to be asphalt surface but had been heavily soiled by excavation works right before the satellite photo was made. They could be gravel as well – hard to tell. Another wintertime photo shows vehicles parked close to the mast.

The next photo shows a close-up of the measurement station right near the corner of the metal building. 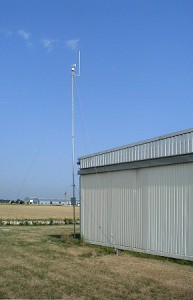 The above photo appears to have been taken mid-morning in the summertime.  One could imagine that under certain conditions temperature reading could be easily corrupted by the metal building which acts as a heat source, especially in the afternoon. The KIT station website describes the station as follows:

The measurement station is located next to a living container at the gliding grounds of Rheinstetten. The glider grounds are approx. 2 km behind the southwest city limits of Karlsruhe. The surroundings are characterized by a mixture of agricultural land, fields, and some forest to the east. Overall the most optimum conditions prevail for meteorological measurements, especially for wind.”

And temperature? The site also gives information about the processing of recorded data.

The measured data are recorded on site at the gliding grounds using a PC. The computer connects to the recording system of the University of Karlsruhe and transmits the data every 10 minutes. The measured data are processed at the same intervals and displayed at this website.
On the graphics pay attention to the date and time given. In the event of an operational disruption, the data are not updated and so may be old. Longer periods of station inoperation can be read at the site “Statusmeldungen” [status reports]. There you will find information about operational disruptions and the transmitted data.”

Though the station is not horrendously sited, it appears the readings are corrupted and thus could be improved. If this site represents the general quality of Germany’s measurement network today, then we need to take Germany’s weather statistics with a grain of salt. Many German weather stations have been moved. And as we know from other countries, often these stations are moved to less than ideal locations, e.g. airports, next to parking lots and/or buildings.

I’m still trying to determine if this station is part of the German Weather Service (DWD) network. No other station seems to exist in the immediate area.