A Short History of the Human Race
Part 4/4. The Iron Age to the Present
Research by Ed Caryl

Climate historians usually recognize one Holocene Climate Optimum, from the end of the last ice age to about 4000 years ago. But as we have seen in this series of articles, there were three major warm periods, the first in the Upper Neolithic from 11,000 years BP to the 8.2 KY event, another from 8.2 KY to the 5.9 KY event, then the Bronze Age from 5.9 KY to 3.2 KY before present.

Each warm period resulted in a rise in sea level, the first melting most of the remaining ice from the ice age, the second finishing off the last ice in Canada and northern Europe. Each of these warm periods gave rise to a surge in population and technology. Each warm period advanced civilization. In the Bronze Age, empires arose in Mesopotamia, Egypt, and Anatolia. At 3200 years ago, all this came to an end.

At 3200 years BP, cold dropped sea levels by over 2 meters. Populations went on the move in response to crop failures. The Egyptian, Hittite, and Mycenaean Greek empires collapsed. Piracy (the Sea People) reigned supreme in the Mediterranean. No one knows for sure who the Sea People were because their incursions did not result in their establishing another empire, they simply looted and destroyed most of the cities around the Mediterranean. This was the Greek Age of Heroes. The time Homer attempted to record in the Iliad and the Odyssey. The history of this period survives as myth. This was also the time of Moses as recorded in the first four books of the Bible. 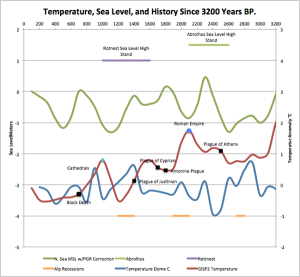 Figure 1 (from upper to lower trace) is sea level, Greenland ice core, and Antarctic ice core temperatures, with the orange Alpine Recession time line at bottom. Some notable events are indicated on the Greenland temperature trace.

Trade was interrupted during this period, so tin imports for bronze were cut off. Bronze continued to be recycled, but the shortage encouraged the use of iron. This was the beginning of the Iron Age. The Iron Age should probably be called the steel age because pure iron is nearly as soft as bronze. Early blacksmiths learned quickly that working carbon into the iron made it much harder. Doing so results in steel, but making steel requires high temperatures making it more costly, so steel edges were welded to iron axes to produce an edge that would remain sharp with use while the whole tool remained less expensive. This is sometimes still done today.

The Greek Dark Age lasted for 300  years. Other areas recovered a bit more quickly, but Greece even lost their written language during this interval, only recovering it in the Greek Archaic Period. The Archaic Period began during a warm period seen in a 200-year period of Alpine Recession, sea level stabilization, and southern hemisphere warming. In this period, architecture, art and literature of all kinds flourished. Population increased. Greek colonies were established all around the Mediterranean and Black Sea coasts. All this came to a halt in another cool period.

In 430 BCE, the Plague of Athens struck. It has not been determined what pathogen caused this plague. Typhus, typhoid, the Ebola virus, Marburg, Small Pox, and Measles have all been suggested as possibilities. It killed a third to two-thirds of the population of Athens, including their general at the time, Pericles. It weakened the Greeks to the extent that the Macedonians, and then the Romans, dominated Greece until the middle ages. Population and trade growth at this time exacerbated the spread of disease across the then known world. If the Plague of Athens was caused by the Ebola or Marburg virus, import of animals from Africa, as well as overcrowding and poor sanitation, was the likely cause.

Temperatures and sea levels were rising after this time. Alexander the Great conquered most of the Middle East, but after he died, his generals couldn’t hold that territory. Rome began to flourish, and by 100 Common Era (CE), had conquered most of Europe and a large part of the Middle East. The glaciers in the Alps were in recession for 300 years, 150 years before, and 150 years after, the birth of Christ.

Figure 2 is a map of the Roman Empire in the time of Emperor Trajan. (Wikipedia Commons)

A period of cooling then began in about the year 150 ACE. The Hatepe/Taupo Lake VEI 7 eruption took place in 186 CE. The dust and sulfates may have precipitated more cooling, and the effects were seen in Rome and China. Sea levels began to fall. Crops in northern Europe began to fail. Disease began to take a toll.

The Antonine Plague struck Rome in 165 CE, lasting for 15 years. It killed up to one million people and devastated the Roman army. A few years later, the Plague of Cyprian in 250 to 270 CE repeated this devastation. These plagues carried off several Roman Emperors and caused manpower shortages in agriculture and the Roman army. During this period, germanic tribes began moving south across Europe, putting pressure on Rome at a time when Rome could least resist.

As the temperature dropped from the high of the Roman Warm Period, conflict and migrations stirred Europe and the middle East. Plagues and warfare continued to impact populations. For example, the population of Rome went from one or two million at its hight in the 2nd Century to as low as 100,000 in the 6th Century. The Plague of Justinian struck the eastern Mediterranean in 541 CE. Over the next few years it killed perhaps 25% of the population. As many as 25 million people died over the next three centuries. More migrations took place. This population summary is taken from Wikipedia here. The population levels of Europe during the Middle Ages can be roughly categorized:[1]

Notice how this description follows the global temperature as seen in the sea level curve in Figure 1. During the Medieval Warm Period, 950 to 1250 CE, and the resulting population boom and expansion, the construction of large cathedrals began all across Europe. The Vikings expanded across the Atlantic to Iceland and Greenland, even briefly establishing a colony in Newfoundland. All this came to and end, again because of climate. Mt Rinjani in Indonesia, erupted in a VEI 7 event in 1257 CE. This event may have precipitated the Little Ice Age. There was a famine across Europe in 1315, caused by bad weather triggered by another volcano, Mount Tarawera in New Zealand. The Black Death struck in 1346, beginning in the Crimea. It is estimated that 30 to 60% of the European population died. The Spörer Solar Minimum from 1460 to 1550 contributed to low temperatures.

The low-stand in global temperature in the Little Ice Age is reflected in the CO2 level as seen in the Antarctic Law Dome ice core data, Figure 3. This is because of lower sea surface temperatures. Low temperatures span the Maunder Minimum and end at the Dalton Minimum of the early 19th Century.

If the solar minimums of the 15th and 17th centuries contributed to the Little Ice Age, then the Modern Maximum must contribute to our current higher temperatures. As one can clearly see, high temperatures drive increasing populations, increasing crops, increasing innovation and technology.

We need not fear warmer temperatures. We do need to prepare for cooler temperatures, whether those arrive next winter, decade, century, or millennium.