Below is a plot of sea level and temperature for the last 21,000 years, when the world warmed out of the last ice age, and civilization became possible. This is the end of the Upper Pleistocene and the dawn of the Holocene. Note, that at the end of the last ice age it took 12,000 years for all the ice to melt. It was a long slog out of the caves. That first warm period, from 10,200 Before Present (BP) to 8200 BP was warmer than it is today, even though a third of the ice was still melting. The last major ice melted about 6500 years ago. 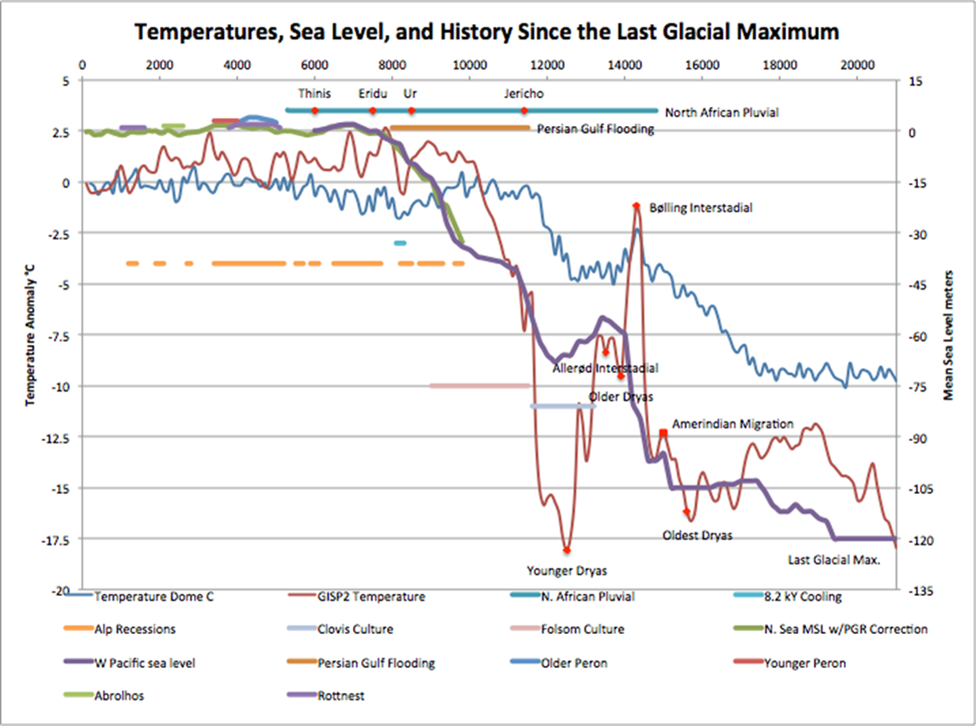 Figure 1 is a plot of the last 21,000 years. The heavy purple and green traces are sea level with the scale on the right. The thin rust and blue traces are temperature from a greenland ice core and the Antarctic Dome C ice core respectively with the scale on the left. Three other time lines are: thick blue, the time of the last North African Pluvial period, when the Sahara was a grassland; dark orange, the time of the Persian Gulf flooding; and the light orange timeline, interrupted several times, were times of Alpine glacier recession. The short 8.2 kilo year cold period is marked in light blue. Various sea level high stands just above the green sea level trace are labeled in the legend. The grey time-line is the time of the Clovis Amerindian culture. The pink timeline is the time of the Folsom Amerindian culture.

I call your attention to several things in Figure 1. From right to left, old to more recent: The end of the ice age began about 20,000 years ago, when the northern hemisphere suddenly warmed by 5°C as seen at the source of the Greenland ice, the North Atlantic. The Southern Ocean, as seen at Dome C, did not warm for another 2000 years. But, the Bølling Interstadial warming took place simultaneously, globally, 14,500 years ago. During that short warming interval, the ancestors of the American Indians made their way across the Beringian plain, down either the west coast of what is now Canada, or down through an ice-free corridor through Alaska and central Canada, thence down across the length of the Americas to as far south as Terra Del Fuego in just a couple of thousand years.

In North America, by 13,500 years BP, the Amerindian Clovis culture was living off the megafauna, the large mammals present in this era, using beautifully worked large stone spear-points. 1500 years later, after the megafauna were killed off, either by the Clovis people or the cold Younger Dryas period, they morphed into the Folsom Culture, using smaller stone spear-points more suited to the smaller remaining animals.

In North Africa, and southwest Asia, beginning 15,000 years ago, because earth’s axis tilt began to favor the northern hemisphere during summer, the deserts were favored with additional summer monsoon rainfall. This allowed more human migration from north Africa into the Levant. At this time the Persian Gulf was a low valley watered by the Tigris and Euphrates rivers and several others, some now dry wadis, combining into the Ur Schott river, and before the Last Glacial Maximum (LGM), at least two large lakes. Fresh water springs, now 4 or 5 fathoms under the gulf off Bahrain, supplied additional water. 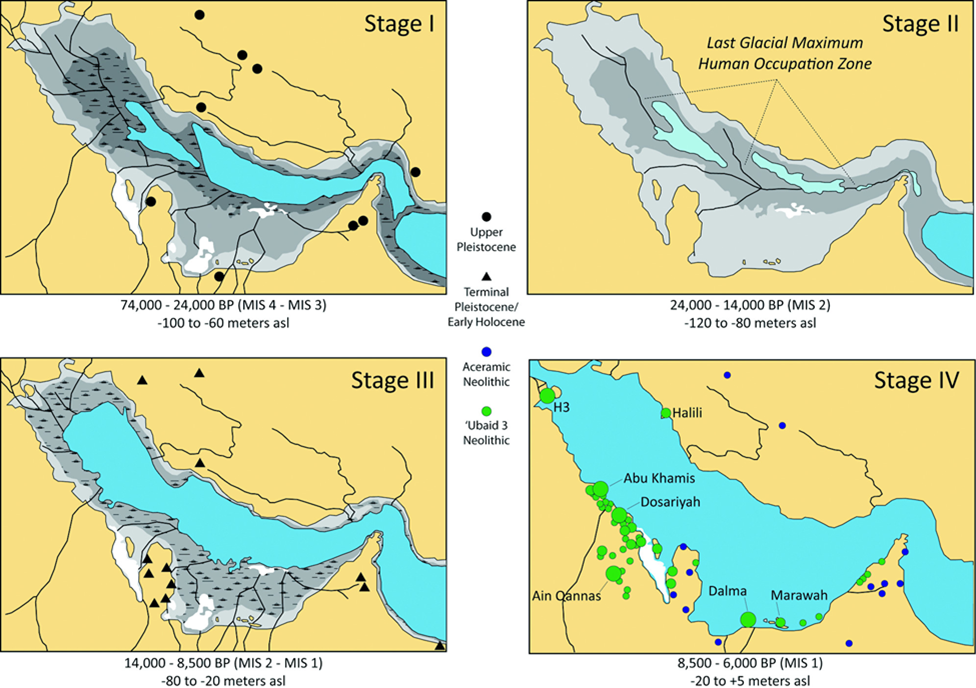 Figure 2 is a history of the Persian Gulf over the period from 74,000 years before present to 6,000 years ago. Source here.

There must have been people living in this valley, though because it is now flooded with 40 to 60 meters of water, the archeology necessary to prove it will be very difficult. But we do know that those occupation sites shown in the Stage IV panel above appeared very suddenly 8500 years ago on the Arabian shore and the people in those sites came from somewhere close by as they share a common and unique culture, the Ubaid culture. This valley may have been the source of the Eden stories. The sea level at the time of the Ubaid culture didn’t stop rising when it reached the level it has now. It rose an additional 5 meters in this area, flooding what is now southern Iraq for a hundred miles inland. Ur was established as a port, on the shore of this inland sea. There is evidence of reed-hulled sail boats in this time period, including bitumen fragments of the coating used to protect the reed structure, ceramic toy models, and an image on pottery showing a bipod masted craft. The ruins of Ur are now in the desert northwest of Basra, Iraq, far from the sea.

Florida was also much larger before the sea level rose. Any coastal activity by Clovis culture people along the coast of the Americas is now under water. This is also true of many areas along in the Red Sea, the coast of India, and southeast Asia. A large area in what is now the South China Sea, the Sunda Strait, was also dry land and almost certainly settled.

The warm period from 11,500 to 8200 years ago was a time of many important advances for the human race. In this period, most of the important animals and agricultural crops we know today were domesticated in the Persian Gulf and Fertile Crescent region. Before this time people were nomadic, moving from one food source to another in the course of each year, building shelter as needed or living in caves. After this time many people lived in villages in permanent dwellings. By 8000 years BP, corn (maize) was domesticated in central Mexico.

As an example, Jericho is the oldest permanently occupied town, with the oldest level dating from 11,400 years BP. Before this time, the site had been used only as a temporary camp, as there is a large permanent spring nearby. The oldest level even had a 2 meter wall all around it with a watchtower that is still standing as it was buried in the tell. The dwellings were round pit houses, half sunken into the ground, with stone walls and a “wattle and daub” or adobe roof. World-wide, this type of house appears as the first permanent type dwelling in many cultures. It is still found in Northern Syria. At a similar village 5 miles north of Jericho, seedless domesticated figs have been found dating from this era. These would have had to have been propagated by cuttings, as the seeds never developed beyond the embryonic stage. Grains found at early Jericho were still of the wild variety, though they were gathered in quantity and stored for later use.

At Ur and H3 (above map, Figure 2, stage IV), domesticated grains were found, and 8200 years ago, evidence of irrigation, as well as domestic cattle, sheep, and goats. At this time, the domestic cat is found, though who domesticated who has not been established. Cats seem to have wandered in from the desert, found a source of food (domestic mice and domestic house swallows feeding on the stored domestic grain) and shelter, and decided to stay on. Some authors say this is “self-domestication.” I suspect cats domesticated us.

The first Holocene cold snap occurred 8200 years ago. Global temperature dropped about 2 degrees as seen at both poles. This lasted for about 200 years and was accompanied by drought and famine. This forced an increasing reliance on domesticated crops and animals, triggered the use of irrigation in Mesopotamia, and the domestication of corn (maize) in Central America. In North America, this split up the Folsom Culture people and drove the beginning of tribalism in the Paleo-Amerindians. This cold and arid spell was overcome by the technology, and the animal and plant domestication, that had developed in the earlier warm period.

Advances were made possible by the warm period that began more than 3000 years before all the ice melted. Sea levels were rising to be much higher than today and the human race was thriving on all continents except Antarctica. Warm is good. Cold is bad.

Next: The later Holocene and the rise of empires.