When it comes to the climate debate, everyone knows that it really all boils down to how much is man’s impact. It has nothing to do with whether climate is changing or not. It always has.

The core question is how accurate are the climate models and are they really accurate enough to use for policymaking?

Skeptics have long argued that the models use a climate sensitivity for a doubling of Co2 that is much too high…even preposterously high. The alarmists, on the other hand, insist that it isn’t, and that the models are pretty much on target. Now that climate models have been making predictions for well over 15 years, we now have enough data to make a preliminary call.

If the models are right, then the observed temperature should be following the trend predicted of the ensemble of models. But if the two trends are diverging, then the models are inaccurate and should be revamped. C3 Headlines here has posted a chart comparing observed (blue) to model trend (red): As the above chart shows, the divergence between modeled temperature and observed is setting new records with every passing month. The divergence for the 36-month moving average is now at about 0.35°C, already an embarrassment for the climate modellers.

Even more stunning, the rate of divergence using the second order fitted trends shows that the models are performing even far worse than we thought. Rather than depicting a steady divergence, the curves show that the divergence is actually accelerating!

The following shows what the divergence will look like in about 10 years time should the current observed trend continue, i.e. a slight warming: 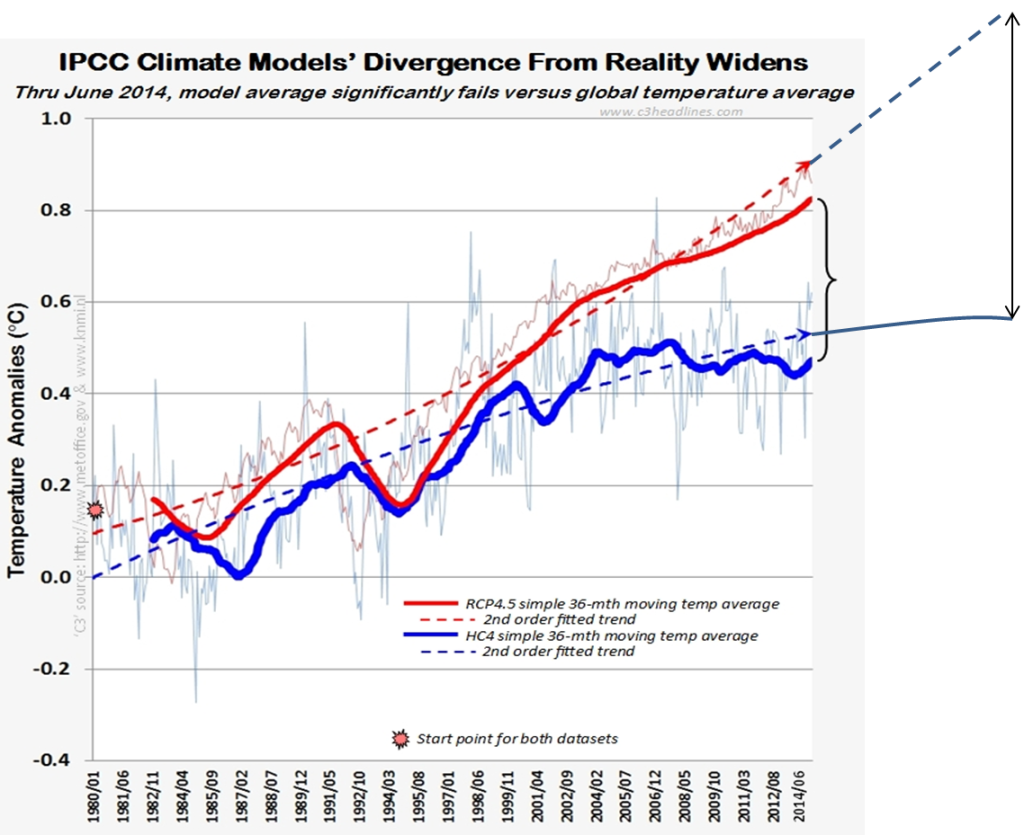 Extrapolating about 10 years out. By 2025, the divergence will be 0.6°C (and even more if the earth cools, which many scientists are projecting).

What does this all mean? Should the trend continue over the next decade or so, the error will be greater with each passing year, and it won’t be long before it’s glaring. Even the trickiest graphic layouts and chart manipulations soon will not be able to hide the gaping difference.

So even if the current decade manages to be a little warmer than the last, the model error will still be sticking out more than ever.

Time is truly on the side of the skeptics. For the alarmists, it is running out – fast!