Nowhere have records been falling faster than in Antarctica. And what is shocking is that these records are all tied to cooling – and not warming.

Antarctica has been setting new maximum sea ice records almost daily, and never has Antarctic sea ice been so high for so long since satellite measurements began some 35 years ago. Sea ice anomaly has averaged over 1 million square kilometers for over one year. 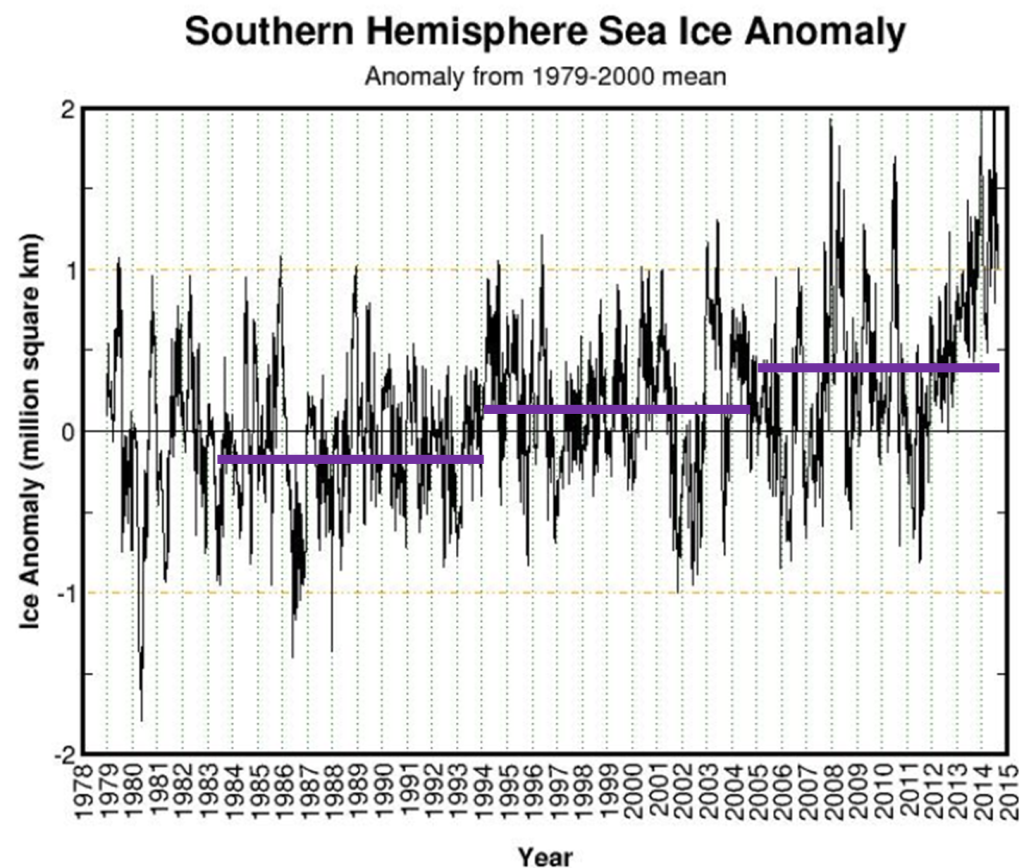 Figure 1: Antarctic sea ice anomaly. The mean of the past three decades has been rising for 30 years. Approximate mean bars added by author. Source: arctic.atmos.uiuc.edu

Almost daily observers of southern hemispheric sea ice have been hearing of a new record for ice extent for the date. The overall trend is not something that can be regarded as a recent anomaliy attributed to natural weather-like variability. Rather it really has to do with multidecadal trends that are unrelated to manmade CO2 emissions.

Figure 1 above shows how each south polar decade is icier than the one before. There is only one reason for this: There is less and less heat down there to prevent ice from forming, which seems to squarely contradict claims of a warming that is global.

In total the global (Arctic and Antarctic combined) sea ice mean for the last one and half years has been above the long-term mean. Scientists are scrambling to find out what has gone wrong with their model calculations. It wasn’t supposed to be so.

Figure 1 also shows how Antarctic sea ice has remained steadfastly above normal for more than two and half years, something that has never happened since satellite measurements began. Moreover, Anthony Watts here writes: “We are now on day 1001 of positive anomaly based on the 1979-2008 baseline.” Scientists who have long claimed the globe is warming are baffled and a few are even so shocked that they are denying it altogether.

2014 for Antarctica has been especially icy. Figure 2 below shows how 2014 daily sea ice extent, depicted by the bold red curve, has been setting new record daily highs for the last 5 months.

Not only has the sea ice area expanded at the South Pole but so has volume, this according to Germany’s Alfred Wegener Institute last October. In a German language press release the Bremerhaven-based AWI concluded that “from various studies the total volume of the Antarctic sea ice has grown over the last years.”

Not only record sea ice extent and volume are telling us that Antractica is cooling dramatically, but so are the thermometers. For example last year the National Geographic reported here that NASA had recorded the coldest temperature ever on the Antarctica continent: -136°F. Also the University of Wisconsin, Madison reported that the South Pole Station saw a new record low temperature of -73.8°C (-100.8°F) on June 11, 2012, breaking the previous minimum temperature record of -73.3°C (-99.9°F) set in 1966.

In 2010 the Neumayer III station, operated by Germany’s Alfred Wegener Institute, recorded the lowest temperature at their Antarctic location in their 29 years of operation. The mercury dropped to -50.2°C.

Some global-warming-hypothesizing scientists are finding it difficult to cope with the reality of growing sea ice at the South Pole, some even insisting that it is shrinking, or that the expansion is a sign of warming and that the trend will reverse later in the future. But other experts (skeptics) think these scientists are being naive to think that a trace gas could control the entire global climate system. The climate system, they say, is far too complex and many other more potent factors are really at play. And so these experts aren’t at all surprised by what is going on.

Willie Soon, Professor of astrophysics and geosciences at the Solar and Stellar Physics (SSP) Division of the Harvard-Smithsonian Center for Astrophysics, says, “The South Pole is in sharp contradiction against the CO2 global warming scenarios which were supposed to melt most of the ice masses of the world.” So much so, Soon says, that “it is still being denied by some professional scientists“. Soon says that the freezing of the South Pole is “one fact that shows how much more we need to understand about how the Earth climate system can vary naturally and how different regions are inter-related to each other rather than insisting that all changes and variations must be caused by rising atmospheric CO2 alone.”

Antarctic sea ice should retreat when PDO and AMO cool

Veteran meteorologist Joe Bastardi, who specializes in providing commercial clients with short-term and seasonal forecasts, also thinks other major global factors are at play – for one: ocean surface temperature oscillations in the Pacific and Atlantic, i.e. the Pacific Decadal Oscillation (PDO) and the Atlantic Decadal Oscillation (AMO): “The southern oceans around Antarctic are cool in a warm PDO, but warm in a cool PDO.”

Bastardi believes that once the PDO is well into the cool phase, the Antarctic sea ice will retreat. “If the southern ice cap does not shrink, then that will be a problem, but I have confidence it will.”

But Arctic will recover

Conversely Bastardi thinks that as the AMO enters its cool phase, in about 5 -10 years, the Arctic will be well on its way to recovery. Already we see signs of that starting today. Joe has written an entire essay on this, and it will be posted tomorrow.

In summary: While scientists who have invested careers in tying climate change to CO2 are scrambling to explain the lack of cooperation by the sea ice at the South Pole, other experts think the anomaly is all part of longer term natural cycles which man is powerless to stop.

15 responses to “Dramatic Antarctic Freeze Up…Iciest Decade Ever On Satellite Record…Every Decade Icier Than The Previous!”