I think global warming is a misnomer.

There is a distortion of the temperature pattern on the globe, brought about by the natural cyclical warming events of the warm PDO and warm AMO together. I spoke about this at Heartland a couple of years ago – how the sea ice increase in the south and the decrease in the north were the hidden message that here is no “warming” just a distortion.

When the tropical Atlantic and Pacific warm in tandem, there is a natural warming that takes place, especially in the northern hemisphere. The Pacific warming after both oceans being cold is a much more dramatic event, as it is the biggest ocean. The fact we have more land in the northern hemisphere and that the Arctic is surrounded by land means the summer seasons over the land masses can be hotter. Also the oceans in the north near North America are warmer. One can see this on the example of the warm PDO (left):

Notice the warmth near Alaska, yet the cool on the southern side of the globe near Antarctica. NOTICE THE TROPICS, THE NUMBER ONE SOURCE OF ENERGY TO DRIVE THE CLIMATE, are warm.  This adds more heat and moisture to the air, warming the atmosphere. It’s why we saw the rise in temperatures in the 1980s and 1990s.   In the cool version (right) the heat is where it had been cool earlier.  So the southern oceans around Antarctic are cool in a warm PDO, but warm in a cool PDO.

Look at the graphic of Antarctic ice below: it fits perfectly. At the start of the warm PDO around 1980, the ice was below normal, but the NATURAL cooling, compensating for warming in the tropics and north during the warm PDO, means the stage is set for the Antarctic ice increase: 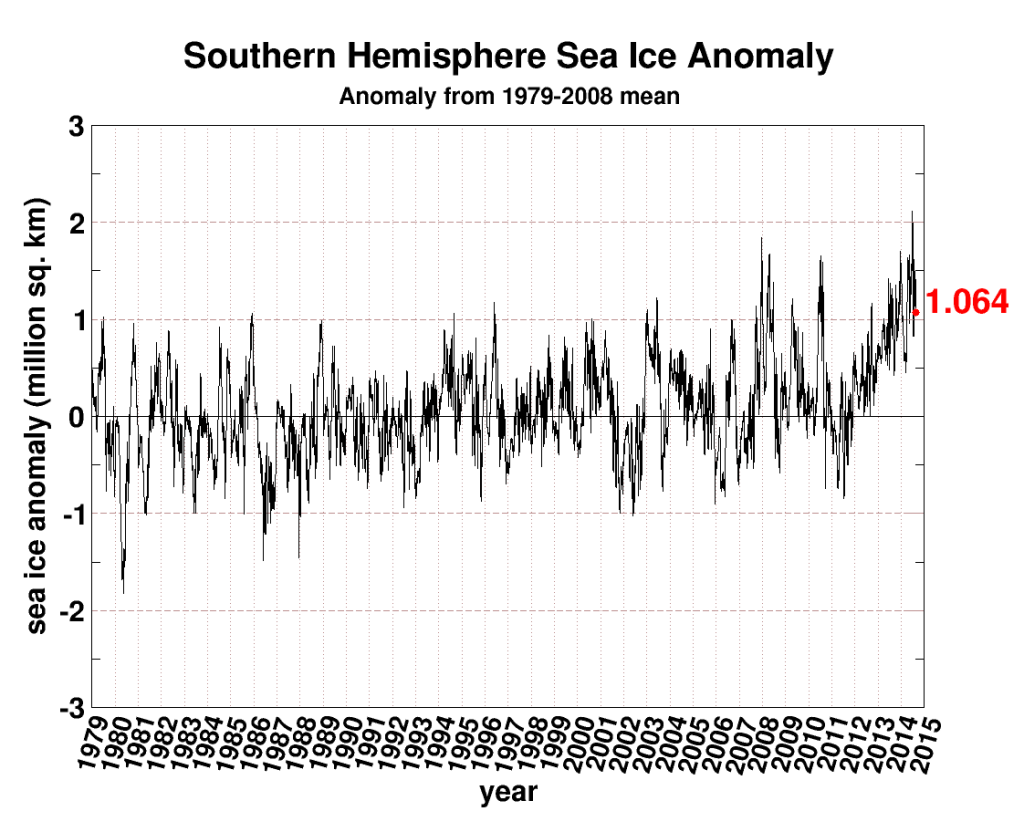 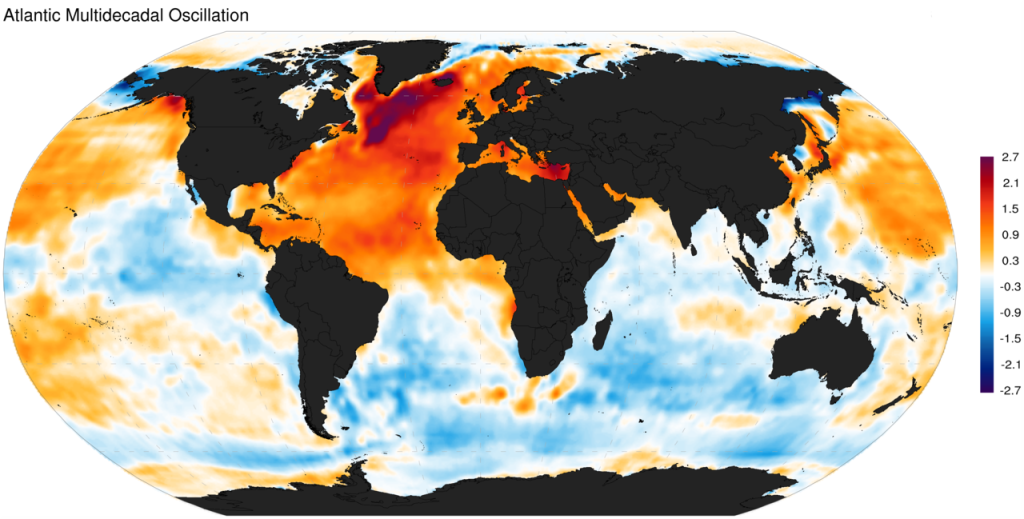 The Arctic’s exposure to the warm oceanic currents is much greater from the Atlantic side. This warm water moving toward the Arctic ocean obviously has a huge impact.

The deck is stacked to warm the northern hemisphere, jack up the global temps and shrink the Arctic ice. But at the start of the period, because the cold PDO and AMO together in the 1970s cooled the Arctic, the Arctic ice cap was way above normal. 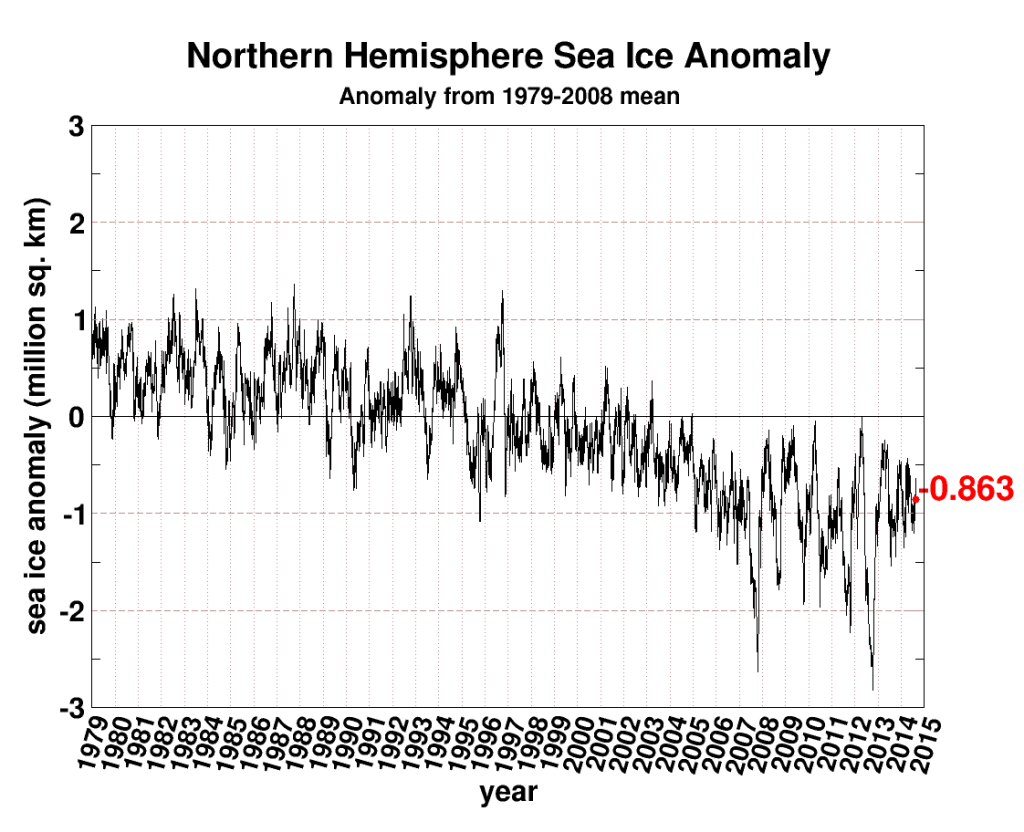 BUT NOTICE THE SOUTHERN OCEANS WHEN THE ARCTIC WARMING IS GOING ON! THEY ARE COOLER!

Bingo, this is compensating cooling. So there is a cyclical distortion. The real key is measuring the water vapor, using temperatures is the wrong metric! Because without the amount of water vapor increasing, there can be no trapping. Co2 is 1/100th of the GHG and it’s likely that’s just about its influence on the entire shooting match of temps. It is estimated that the GHG blanket adds 33°C to the planet’s temperature. Co2 is boxed in at a range of 0.4 to 0.7 of that. It can do nothing because of all that is around it.

This explains perfectly the whole temperature pattern. Given the way we measure temperature, and the fact most of the warming has been in the Arctic in its cold season when there is little overall effect on the water vapor at such cold temperatures, it is highly likely that the subtle compensating cooling in the south over a much more moisture-laden atmosphere means there is no change in the true global temperature. What is happening now is that the atmosphere has adapted to the added warmth in the same way your shower room adapts to the turning on of a hot shower. So what happens when you turn off the shower (i.e. oceans flip their cycles)? It cools. 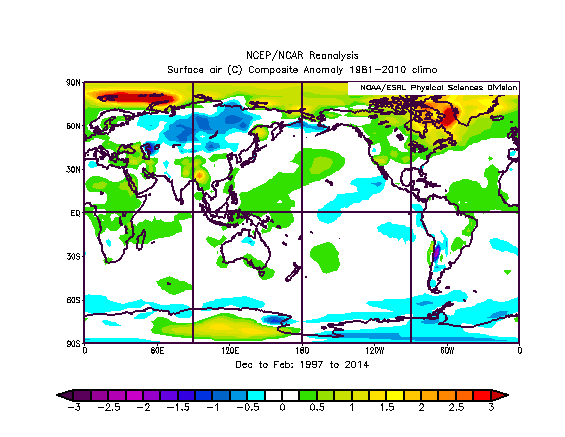 Notice the cooling in the Antarctic summer, limiting the ice melt season!

We are now in the period of “temperature leveling off”, where the atmosphere is readjusting from the previous increase in heat and moisture from the warmer cycles.

So here is the test we are in. I said in 2007 global temps would come down because of the shift in the PDO. Since 2005, its plain to see a slight downturn in a jagged fashion has started – just as I predicted 7 years ago: 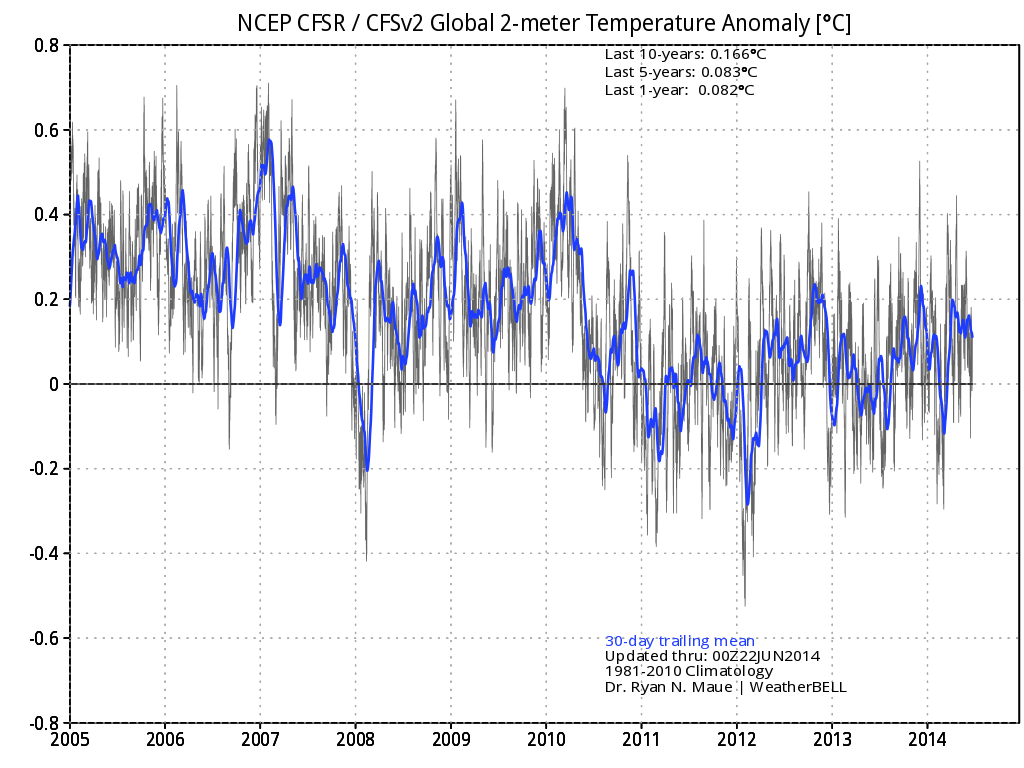 The reason for the fewer, less intense El Ninos is because we are going back to the cycle of the colder PDO periods, plainly evident in the Multivariate Enso Index.

You can see the warm PDO and the major ENSO events that occurred when the globe warmed and the leveling off since then. Naturally, once the Atlantic flips, the global temps will return to where they were, as measured by satellite, at the start of the satellite era, which coincided with the START OF THE WARM PDO!

Its intuitive and natural…if you warm the tropical Pacific, you warm the temperature, but the compensating cooling is waiting in the longer term. That was my idea with the triple crown of climate back in 2007. The sun, the oceans, and stochastic events rule the climate.

So the test is on, and it doesn’t cost 165 billion dollars to justify an agenda (amount US has spent on climate change). It takes a working knowledge of where the climate has  gone in order to know where it is likely to go. Once the AMO flips to its cool phase, global temperatures will begin a descent much like the ascent we witnessed back in the 80s and 90s, which got us to our current plateau.

The Arctic is already showing, with the lack of ice melt this summer, what it will do once the AMO flips for good (in 5-10 years). It will recover. The global temperature will drop, but it will not be a drop representing a coming ice age or true cooling, just the cycle swinging back the other way. Meanwhile the Antarctic cap will retreat, eventually to levels seen in the 1970s and early 1980s.

If the southern ice cap does not shrink, then that will be a problem, but I have confidence it will.

When you are right, there are reasons. And when you are wrong there are often excuses, which is what you see from the people today who label the very people who said there is climate change (naturally) and made the correct forecast, as Deniers. The real danger to the globe is not global warming, it’s the global warming agenda. In a way, that is what the increase in the Antarctic ice cap shows you.

See Joe explain it here at the Saturday Summary.