The preliminary numbers for August’s weather are coming in from some countries. For western Europe the picture is becoming clear: August was cold and wet, with strong notes of winter.

Germany’s Deutsche Wetterdienst (German Weather Service) reports that August in Germany, at a mean temperature of 16.0°C, was 0.5°C colder than the mean of the international 1961-1990 reference period. Compared to the 1981-2010 reference period, August 2014 was 1.5°C colder than normal. It was Germany’s coldest August in 8 years.  The summerlike temperatures at the start of the month faded as the month progressed and the weather turned autumn-like, especially the last third of the month. The result in total was a cooler, wetter and less sunny August.

The Deutsche Wetterdienst (DWD) collects and evaluates data from 2000 measurement stations scattered across the country. On August 24 it even snowed 4 cm on Germany’s highest peak Zugspitze (Read here).

Overall the data show that Germany’s annual mean temperatures have been dropping over the last 17 years (a period, some scientists say, that is necessary before one can speak of a climate trend): 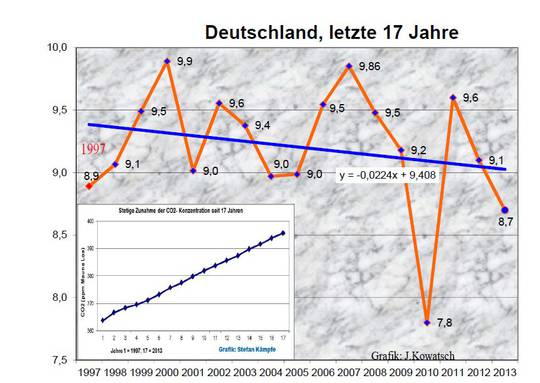 As Germany cools, one has to ask how much longer the DWD intends to keep misleading the public with its logo at its website, which depicts an accelerating warming. When asked about the reality-remote logo, the DWD said they would consider the matter when it revamps its website in the future. They didn’t seem too concerned about possibly misleading the public (also read here).

Austria’s national ZAMG weather service also is reporting a cold and dark August: 19% less sunshine, the 14th least sunny August since sunshine measurements started in 1884. In Austria it also was much cooler than normal, posting an anomaly of -1.1°C.

Like Germany, Austria also saw its coldest August since 2006. Austria also had forecasts of snow already in mid August.

UK: “…one of the chilliest in decades”!

Not only Central Europe saw a cold August, but so did the United Kingdom. Once again the once-predicted global warming-caused barbecue summers remain elusive.

The UK Met Office here announced that the UK’s mean August temperature came in at 13.8°C , or 1.1°C below the long-term average. That would make it the coolest August since 1993. Also the UK’s Daily Mail writes of an August charcterised by forecaasts of snow that included warnings of the “coldest August spell in a century“.

The Weather Channel (TWC) earlier this month was calling August in Great Britain and Europe “one of the chilliest in decades“.

RECORD numbers of snow patches have remained on Scottish mountains this year despite warm summer temperatures and the impact of global warming, a new survey has revealed.

The annual study, carried out every August by a team of volunteers and published by the Royal Meteorological Society, showed nearly 300 remnants of last winter’s snowfall have failed to melt.

This is the highest number since a Scottish national snow survey began seven years ago, and a dramatic increase on the 24 to 81 patches recorded in previous seasons.”

15 responses to “Europe’s Wintry 2014 August…Sees “One Of The Chilliest In Decades”…Forecasts Of Snow!”