Browse: Home / 2014 / September / 18 / Just How Sure Are The Sea Ice “Experts” About The Arctic Melt Continuing? Looks Very Close To Zero…

Just How Sure Are The Sea Ice “Experts” About The Arctic Melt Continuing? Looks Very Close To Zero…

Recently the Alfred Wegener Institute (AWI) in Bremerhaven, Germany released a press clipping about polar sea ice, obstinately refusing to acknowledge that there is a trend change happening in the Arctic. It wrote:

The area of sea ice in the Arctic fell to a summer minimum of around 5.0 million square kilometres this year, which is about 1.6 million square kilometres more than the record low in 2012. However, according to sea ice physicist Marcel Nicolaus from the Alfred Wegener Institute (AWI) and Lars Kaleschke from the Hamburg Cluster of Excellence for Climate Research (CliSAP) this confirms the long-term downward trend in the Arctic.”

For what is considered to be a leading institute on the research of polar sciences, it sure seems to have a very poor understanding of the relationship between polar sea ice and other major external factors, such as ocean cycles, e.g. AMO and PDO, and the impacts of other natural cycles.

Note how the scientists seem to naively assume the general trend is linear and downward: 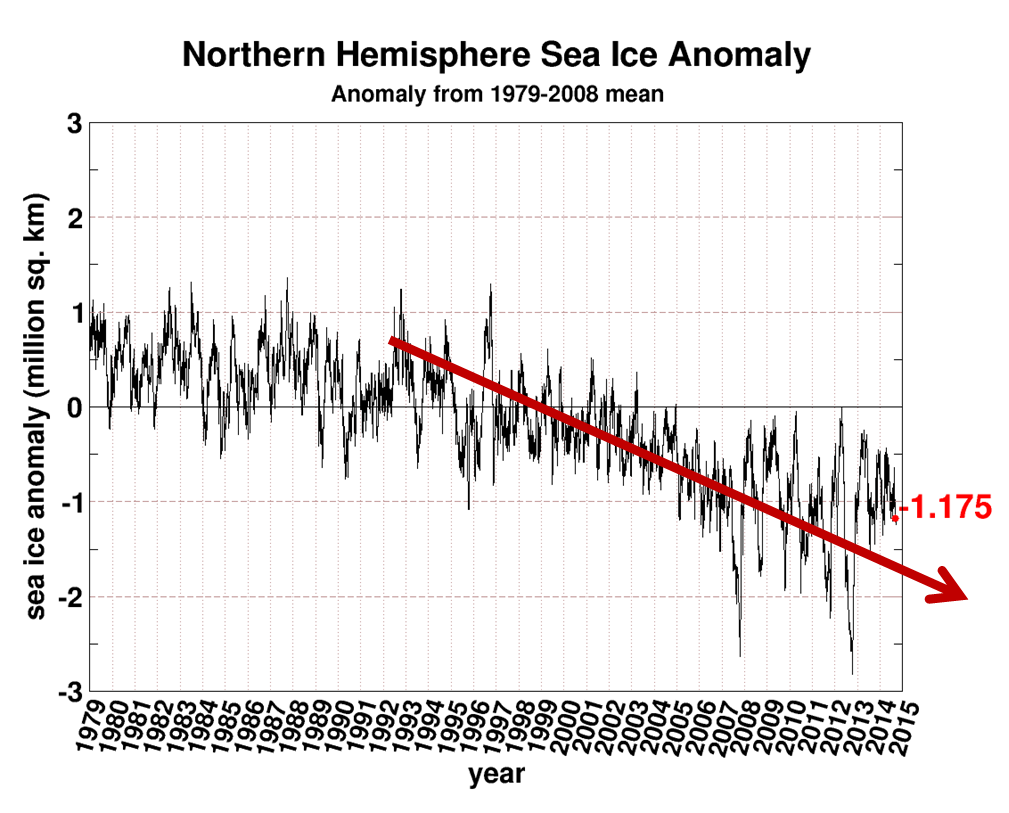 To me it is astonishing that sea ice scientists today are taking the linear trend of just a few years data and simply straight-line extending it out decades into the future, something we’d expect to see from a 9-year old primary school pupil. Yet they do point out that weather phenomena led to a particularly large reduction in sea ice the negative-record years of 2007 and 2012.

So just how sure are the scientists about their claims Arctic sea ice is headed downward? Let’s find out.

My e-mail address, in case you’re naïve enough to believe your models: pierre.gosselin@t-online.de

Listening to these scientists, it should be a hands down no-brainer bet. The consensus says the planet is heating. How confident are you really in your science?

21 responses to “Just How Sure Are The Sea Ice “Experts” About The Arctic Melt Continuing? Looks Very Close To Zero…”