Greens have been all excited about the recent, high publicity solar bike path put in operation in Holland this week. It’s a whole 100 meters or so long…a distance that allows the average cyclist to cycle over and to feel good about saving the planet for about 15 seconds. 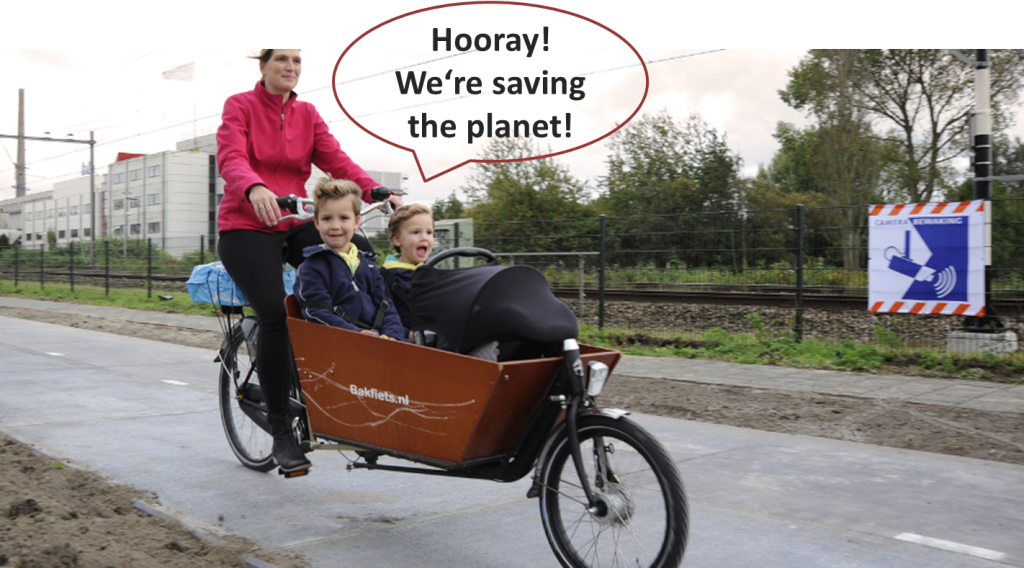 A Dutch project that integrates solar panels into a bike commuter path will officially open this week, on a special roadway outside Amsterdam. Power generated by the SolaRoad’s panels will be funneled into the national energy grid.”

Imagine that, the bike path will be feeding green power “into the national grid“.

That reminds me of the old Peanuts series where Linus once asked Charlie Brown how much allowance he got for feeding Snoopy. “10 cents a week,” Charlie Brown replied. Linus commented: “That helps boost the GNP”. At least for Snoopy it was something worthwhile.

Solar panels embedded in the cycle path near Amsterdam could generate enough electricity to power three houses, with potential to extend scheme to roads.”

Vox.com here writes the bill for the road will be $3.7 MILLION dollars. For the price you’d think it would at least power an entire neighborhood or a small village. Vox writes:

But is this even practical? The bike path will cost roughly $3.7 million and, when it’s fully built out to 330 feet in 2016, will generate enough electricity to power… three households. Not very cost-effective. (That’s more than 1,000 times costlier than the price of rooftop solar electricity in the United States.)”

Of course much of the sum reflects a one time development cost. Even if the price gets driven down 95%, the problem of cost is still relevant and the sun barely ever shines in Amsterdam for much of the year. The horrendous cost of paving all of Holland’s extensive bike paths in the end would not eliminate a single coal power plant for the simple fact that the panels work only for a tiny fraction of the time and conventional power plants need to be on standby.

Then there are still the unanswered questions of how well the panels will hold up. One only needs to consider rain, snow, freeze-thaw cycles, vandalism, cleaning requirements etc.

Many of us have already thought that the idea of mounting them on the roofs of homes was already quite kooky and impractical enough, but the idea of putting them down on road surfaces really takes the economy cake.