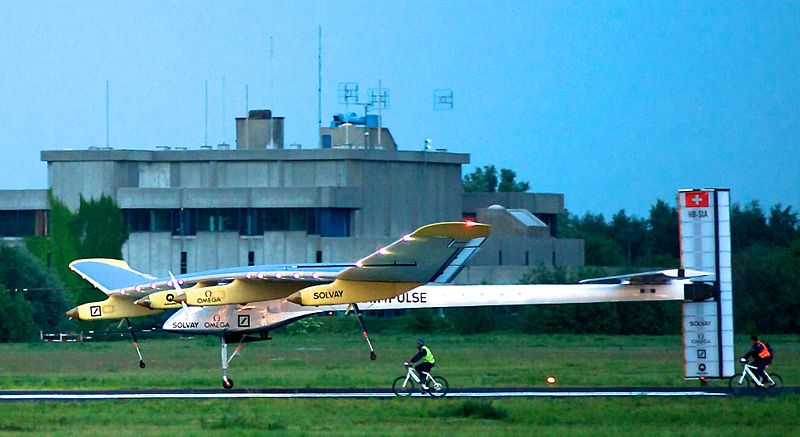 Sun-powered Solar Impulse 2 aircraft is to circumnavigate the globe “without a drop of fuel”. However it will in fact need thousands of litres of fuel from support planes. Photo credit: Brussels Airport, Creative Commons Attribution-Share Alike 2.0 Generic license.

There’s been a fair amount of hype surrounding the Swiss Solar Impulse 2 project where it is being attempted to go around the world in a purely solar-powered aircraft, “without using a drop of [fossil] fuel“. It is being billed as a landmark flight, signifying a milestone in green aviation. However, nothing could be further from the truth.

The fixed-wing aircraft departed Abu Dhabi on March 9 and has since landed in India. From there it will continue to China, Hawaii, Phoenix, New York, Morocco before finally coming full circle back to Abu Dhabi sometime in August, 2015 – “without emitting any climate gases”. Full planned route here.

The pilots Bertrand Piccard and André Borschberg will alternate as the craft makes a series of stops along its journey. The plane is able to carry only a single pilot and no passengers. The aim: “We want to show what’s possible with innovative technologies,” Piccard boasted.

The 2200-kg pioneering aircraft has a wingspan that is comparable to that of an Airbus A340. According to Wikipedia lithium polymer batteries will store and power 10 hp (7.5 kW) motors with twin-bladed propellers. The upper wings have 11,628 photovoltaic cells. The major design constraint is the capacity of the lithium polymer batteries. See plane specs here.

Of course the entire flight is supposed to be done “solely” using renewable energy from the sun, and not use a single drop of aircraft fuel. But when one examines the flight more closely it turns out that mission indeed involves a huge fossil fuel carbon footprint.

According to an audio report by SRF Swiss Radio and Television the Solar Impulse 2 mission involves the substitute pilot, a technical ground crew “of dozens of people” and tonnes of equipment and logistical supplies that have to be flown behind using conventional charter flights. The “fossil fuel-free” Solar Impulse 2 journey is in fact being made possible only with the use of tens of thousands of litres of aviation fuel. This is a fact that is being almost entirely ignored by the media.

It is so that the entire group, the team members, are multiple dozens of men and women, have to fly behind in charter planes. This naturally is the less sustainable aspect of the entire project, but it just isn’t possible any other way. This involves one cargo plane for transporting all the equipment, and a small passenger plane on which the entire group travels to the destinations.”

A promotion video here shows how the aircraft was transported from Europe to its start point in Abu Dhabi earlier this year: With a Boeing 747!

33 responses to “Solar Impulse 2 Flight-Around-The-World “Without A Drop Of Fuel” In Fact Will Burn Tens Of Thousands of Liters!”