German public television seems to have gotten extremely sloppy and misleading lately. Gone are the days of critical reporting and fact-checking, it seems.

Not long ago flagship ARD television, using tricky wording, sadly misled viewers into thinking that the more than 15,000 deaths caused by the Japan tsunami of 2011 were caused by the Fukushima nuclear reactor meltdown (Reality: not a single death has yet to be attributed to leaked radiation). 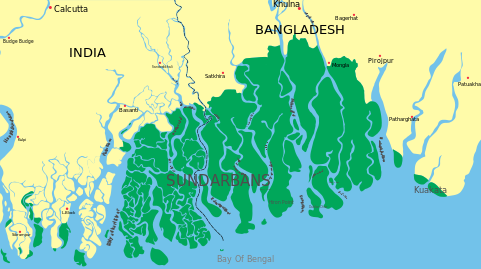 The latest gross deception, by what Germans are starting to call the “Lügenpresse” (the lying press), comes from German NDR public television site which got the entire science on Sundarbans sea level rise wrong.

River delta in India and Bangladesh sinking away: N24 forgets to mention sediment compaction as an important reason for rising waters

Extreme climate change: The Sundarbans have 15 years left
Climate change is threatening all of humanity, but some are especially impacted. In the Sundarbans already the livelihoods of 13 million people are threatened. […] Sea water has already swept over the spot of land on the Indian island of Bali where Mondol grew rice and operated fish ponds – just like earlier generations since about 200 years ago. Water has taken everything else away – and one day it will also take away the hut. ‘Every year we have to move a bit further inland,’ he says. Bali is considerably smaller than the Indonesian island with the same name. Mondol lives in the Sundarbans, a low lying delta region between India and Bangladesh that has 200 islands and round about 13 million inhabitants. Most of the homes are in an impoverished condition. The sea level in the region is rising about twice as fast as the global average. Tens of thousands already have become homeless. According to estimates by scientists, a large part of the Sundarbans could be submerged in 15 to 25 years.”

Delta regions are known for the gradual stabilization of their sediment – so-called compaction – sinking. This small detail was simply left out by n24. Here on April 30, 2013 Nature India explicitly pointed out that the flooding was not solely due to climate change:

Seven years after the first report on the ‘vanishing islands’ of Sundarbans, Subhra Priyadarshini revisits the fragile delta in the Bay of Bengal to find that it is not just climate change that threatens the existence of this world heritage mangrove tiger-land spread across the Indo-Bangladesh border. […] ‘In the last 25 years, the rate of relative sea level rise comes close to 8 mm/year, significantly higher than the rate of 3.14 mm/year in the previous decade,’ he says. In a recent report he co-authored for the World Wide Fund for Nature (WWF)3, Hazra says besides global warming and the subsequent thermal expansion of water, the rather rapid subsidence of the Bengal delta (2-4 mm/year), compaction of silt and other local causes may be responsible for the exceptionally high rate of relative sea level rise in the Indian Sundarbans.

Science has already intensively studied the subsidence problem, and so it is peculiar that n24 did not mention this result. Geologist Till Hanebuth reported in 2013 on results from the delta region of Bangladesh. His team found natural subsidence of more than 4 millimeters per year. This rate is considerably higher than the climatic-related sea level rise. In the description of results of a project by the Deutschen Forschungsgemeinschaft (German Research Association) it is stated:

Assessing the recent subsidence of the central coastal Delta of Bangladesh by dating submerged kilns The densely populated low lying Ganges‐Brahmaputra Delta is highly vulnerable to the global sea‐ level rise. In order to estimate the subsidence of the delta, we examined submerged salt‐producing kiln sites in the coastal Sundarbans. These kilns were built just above the previous winterly spring high‐tide level, but are currently located ~155 cm below the corresponding modern level. According to optically stimulated luminescence (OSL) dating, the kilns were ultimately fired ~300 years ago and salt production was terminated by a catastrophic event, which affected the kiln sites at different levels and locations. AMS‐14C ages of charcoal at the kiln’s base and associated mangrove stump horizons support the OSL dates. Based on the elevations and the ages, the 300‐year‐average rate of sinking of the outer delta is 5.2 ± 1.2 mm/a, which includes 0.8 mm/a of eustatic sea‐level rise. Reasonably postulating that the subsidence rate will not change during the next few decades and accepting the estimates of current sea‐ level rise of 1.8–3.0 mm/a or 2.7–7.1 mm/a, a RSL rise of 6.4 ± 1.7 mm/a or 8.9 ± 3.3 mm/a, respectively, must be assumed along the Sundarbans coasts.”