If you take the annual CO2 atmospheric content, and differentiate it, that is calculate the year-to-year change, then you get a plot that looks a lot like the ocean temperature. This has led many people to think that the ocean is the source of the additional CO2. This is not the case.

Many of you will be familiar with the concept of “half-life” from radioactive decay. For a radioactive element, half of the radioactivity will decay in a certain period of time, then half again in the next period, and so on until the radioactivity can no longer be detected. The same principle applies to absorption. Half of a compound will be absorbed in a certain period, then another half in the next period, then another half, and so on. Here is the curve for a pulse of CO2 absorbed into the biosphere. 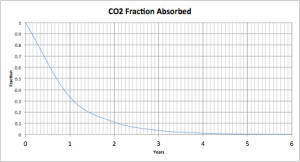 Figure 1 is the absorption curve for a single pulse of CO2 emitted into the atmosphere. The half-life of that pulse is a bit over 8 months. It is undetectable after about six years.

Imagine that you have just taken a deep breath, held it until the maximum CO2 has been exchanged, then exhaled. Half of the CO2 in that puff will be gone from the atmosphere in 8 months, 33% will remain in a year, only 11% will be around in 2 years, and so on. The series is actually 1/3, 1/9, 1/27, 1/81… Now add up all breathing for many years, or all the fossil fuel emissions. 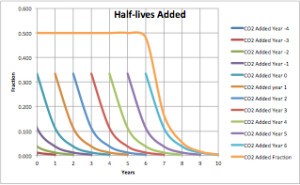 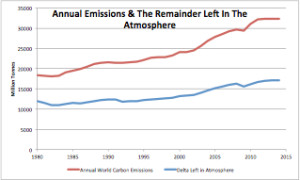 Figure 3 is a plot of annual fossil fuel emissions and the amount of those emissions that annually remain in the atmosphere. The remainder plot has been corrected for half-life. 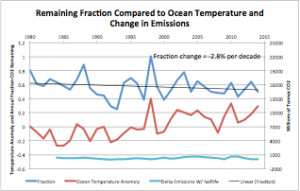 Figure 4 is a plot of the fraction of emissions that remain in the atmosphere, the ocean temperature anomaly (from UHA satellite data), and the change (delta) in emissions with the data corrected for half-life using the fraction change data. (The half-life has been decreasing over time by 2.8% per decade). The left scale is for both the remaining fraction and temperature anomaly. The right scale applies to the delta emissions (the annual change in added emissions). This is scaled to match the fraction change. On a year-to-year basis the ocean temperature changes overwhelm the emission changes, but not the emissions themselves. 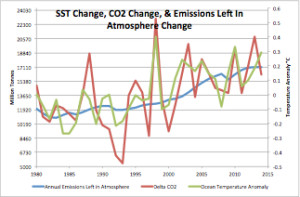 Figure 5 is a plot of  change: SST, CO2, and annual emissions added since 1980. This is the annual delta (differential) of all three. The Mt. Pinatubo cooling and the 1998 and 2010 El Niño warming is clearly visible in the CO2 data. It looks like the CO2 increase is due to ocean temperature, but this is an illusion. The annually added emissions are much larger than the ocean temperature CO2 flux change. 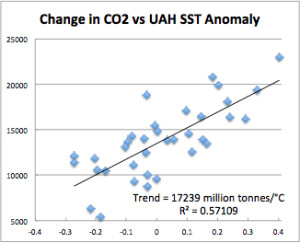 Figure 6 is a scatter plot of CO2 and SST anomaly with a linear trend applied. The trend is 17,239 million metric tonnes of CO2 emitted per degree C of SST change. Now look back at Figure 6. The long term change in temperature is about 0.3°C. This would be equivalent to about 5 billion tonnes of CO2. But the increase in CO2 over that time period was 483 billion tonnes, about 100 times that amount. The long-term CO2 increase is due to emissions, not ocean temperature. Temperature drives only the short-term changes.

About half of fossil carbon emissions appear to be responsible for the atmospheric CO2 rise, and that fraction is decreasing. The year-to-year changes in the CO2 rise are mostly due to ocean temperature changes, but those changes should be considered weather.

45 responses to “CO2 Emissions And Ocean Flux: Long-Term CO2 Increase Due To Emissions, Not Ocean Temperature”