On 1 July 2014, NASA launched OCO-2, the second attempt at orbiting a global carbon dioxide observatory. In December, the first global map was released. 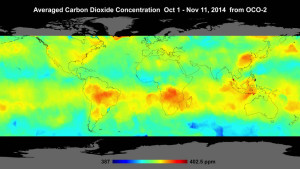 Compare this map with a frame from a previously released video showing a model of what the CO2 distribution was thought to be for roughly the same time period in 2006, the 1st of November. 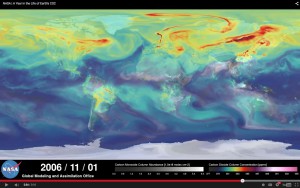 Note the differences. There is much more CO2 coming from the tropical rainforests than the model predicts, and there is a sink, where CO2 is taken up, over Russia that the model does not have.

Since January, there has been no public disclosure of any further maps from OCO-2 on the OCO-2 website, except for a slide (their figure 5, shown below) from a webinar presentation that took place in February. This covers the period from late November to late December. 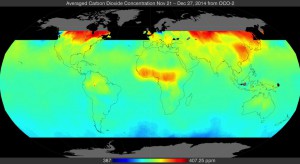 Compare this with a corresponding frame from the model video. 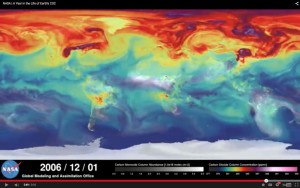 The reality measured by OCO-2 hardly resembles the model. The map released by NASA also seems to cut off CO2 sinks in the North Atlantic and Pacific. This may be excused by the sun angle in the Northern Hemisphere in December. NASA is surely learning a lot from OCO-2, but the findings may not be “politically correct”. We must await further data releases.