“O, what a tangled web we weave,
When we first practice to deceive.”
– Walter Scott

As an energy consultant, I have been implementing energy efficiency improvements over the past six years to help transform our very inefficient log cabin home in New Gloucester, Maine into one of the most energy efficient homes in the United States.

To do this I have local, unfiltered heating degree-day (HDD) history going back to 1893 from nearby Lewiston/Auburn. Seeing people are more familiar with degrees Fahrenheit (0F), I have converted the HDD to temperatures, and averaged them over running 11-year solar cycles. Those results are shown in the following chart: 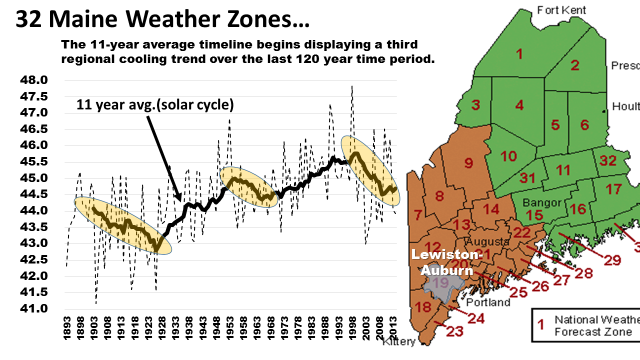 While I was continually updating my local data, I also had cause to visit the National Oceanic and Atmospheric Administration’s (NOAA) website in January 2013 for data on the entire state of Maine. Here I noticed that NOAA’s data indicated that the state of Maine was a total of 1030F colder over the last 117 years compared to local Lewiston data. That worked out to 0.880F per year for “statewide” Maine compared to Lewiston in a southern interior climate. 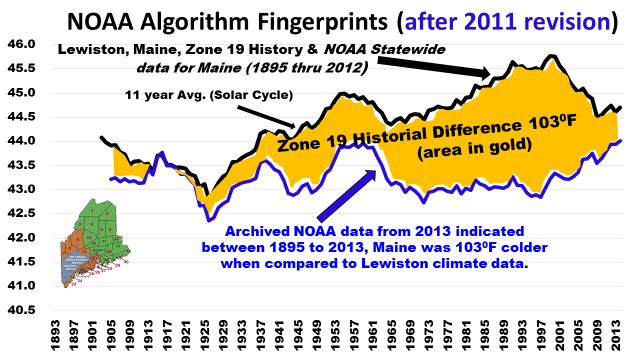 That seemed reasonable because of the inclusion of northern Maine. I archived NOAA data for Maine, Ohio, Tennessee and the 48 contiguous states, as one entity.

In early 2015, I revisited the NOAA website and updated my HDD and cooling degree-day (CDD) data for a local television presentation. Here I was shocked to discover that NOAA had not only rewritten Maine climate history for a second time in the last 18 months, but with all the tinkering they also screwed up southern interior Maine averages. Southern Maine temperatures were now colder than all of Maine as a whole! NOAA had inflated HDD figures so high that they had lowered Fahrenheit temperatures an additional 1510F summed over the years! Southern Maine interior was now 2540F colder over the last 119 years versus original Lewiston data. This means the NOAA rewrote Maine climate history to the extreme of lowering each year the equivalent of 2.120F per year colder. In order to counter Mother Nature’s recent cyclic cooling, the earlier historic years were lowered as much as five degrees while recent temperatures remained almost untouched.

Past adjusted downward also throughout the USA

Upon comparing NOAA data from other states that I had archived in 2013 to current NOAA data, I found similar discrepancies:

Why all the alterations?

Why would NOAA be dramatically lowering temperature records for Maine as well as for other states? A picture is said to be worth a thousand words. In the following illustration I charted the different phases of change by NOAA in 2011 and then in 2014.

There was little if any difference between NOAA and local data in 1998 – until a few years ago. It was only after Mother Nature started cooling local temperatures that NOAA began altering the climate history record. The chart above shows three versions of a rolling 11-year average of historical temperature data since the early 1900’s for the Lewiston/Auburn area.

NOAA was contacted and asked for an explanation. On May 6, 2015, NOAA confirmed in writing the massive changes to Maine’s data. NOAA stated the changes were intentional and justified! NOAA’s written statement included these words:

“…improvements in the dataset, and brings our value much more in line with what was observed at the time. The new method used stations in neighboring Canada to inform estimates for data-sparse areas within Maine (a great improvement).”

NOAA’s statement about the need to recently introduce colder Canadian data into Maine’s past temperature history seemed fishy to me. How do they explain similar adjustments to the data for Maine’s southern interior region?

Worse, they made southern Maine colder than the entire state of Maine! They also revised downward historic temperatures for Tennessee, Ohio, and the United States as a whole. Every U.S. state for which I kept archived NOAA data from 2013 had been adjusted in an almost identical manner.

On June 4, NOAA responded through a general Associated Press statement that they continually readjust thousands of weather data points to account for different measuring techniques through the decades (see part of article to right).

My question to NOAA is: Why?

Why does NOAA feel compelled to apply different measuring techniques to climate data? Why not give access to the raw collected data? Why must NOAA apply a master algorithm to the data that not only has been proven to be corrupted, but also whitewash major climate cooling events in recent years. The American public should be given facts not fantasy. 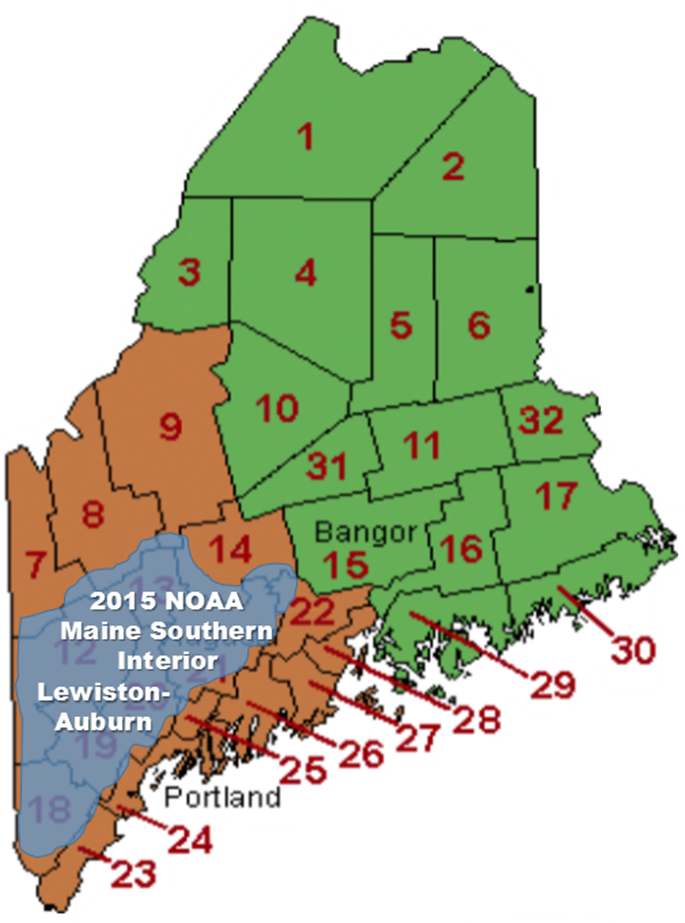 Could NOAA explain the recent climate measuring techniques implemented in the spring of 2014 that have resulted in the CD2 southern interior of Maine (seen in blue area of chart to right) being a third of a degree 0F colder per year when compared to the entire state of Maine?

Again this is fantasy over both fact and common sense. The information below is drawn from NOAA’s most current website. Below is NOAA’s most recent “adjusted data’ for Maine on their website. 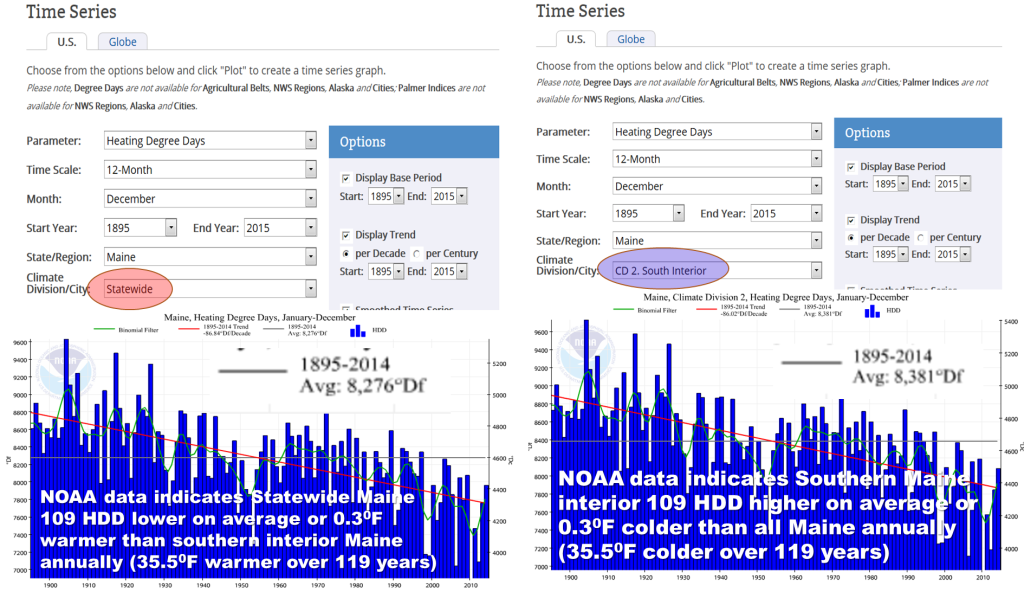 The charts above indicate that southern Maine has on average been 1/30F colder than all of Maine for the last 120 years! NOAA’s recent response to all these questions and observations can be found in their June 4th press release. They reiterated the same mantra; ignore satellite data, ignore facts given by non-scientist (and scientists alike) that disagree with NOAA’s climate data enhancements! We should just trust what NOAA tells us.

Little wonder recent surveys indicated 76% of the American population does not trust the government to do what is right.

NOAA data cannot be relied on

As stated in yesterday’s post, decision makers in the state of Maine, and across America, cannot and should not rely on NOAA data for setting energy policy. If we are indeed experiencing regional cooling, then we should be encouraging insulation and less expensive sources of heating, such as natural gas, heat pumps, geothermal and future technologies associate with thorium and hydrogen.

However, based on NOAA’s data, which indicates a warming trend, lobbyists are focused on electric generation by means of wind and solar. It is important to gather data from other non-governmental sources to make sound decisions. It appears that we presently live in a nation where an agency of the Federal government has rewritten our climate history. Decisions worth trillions of dollars are being made based on fraudulent climate data.