Share this…FacebookTwitterAt his Klimazwiebel website, Hans von Storch, a climatologist for more than 40 years and a director of the Institute of Coastal Research for over 20 years, writes of how last June at a symposium in Nottingham he was asked to comment on his view of the role of science in society. A dean […]

Share this…FacebookTwitterPhytoplankton coping better than expected with ocean acidification By Dr. Sebastian Lüning and Prof: Fritz Vahrenholt [Translated, edited by P Gosselin] Five years ago Greenpeace painted climate doom and gloom on the wall. Supposedly ocean acidification was posing a threat to the phytoplankton and thuswas a danger to the food supply for all sea life. […]

Share this…FacebookTwitterUPDATE: Some have been claiming that I’m on a so-called paleo-diet. But that is not accurate. I guess I may be on something that resembles to a significant extent a paleo-diet, but it is not. I eat a fair amount of dairy products, which cavepeople didn’t eat. I thought the following was interesting: http://www.marketwatch.com/story/the-paleo-diet-has-it-wrong-cavemen-did-eat-carbs-2015-08-18. […]

Share this…FacebookTwitterAt the online Spiegel magazine here science journalist and geology major Axel Bojanowski features his “Photo of the Week”, which this week shows a dust storm blowing across the East Atlantic off the African Sahara. The above photo is provided by NASA Earth Observatory, taken by the Moderate Resolution Imaging Spectroradiometer (MODIS) on NASA’s Terra […]

Share this…FacebookTwitterBernd Atzenroth of central Germany’s online Märkische Allgemeine Zeitung (MAZ) reports on how a stork had its beak and main feathers chopped off by a wind turbine blade. So severe were the bird’s injuries that the animal had to be euthanized. Photo of gruesomely injured bird According to the online news site, the town […]

“We Are Now Starting To See A Dramatic Cooling In The Arctic”, Says Former NOAA Meteorologist …”Extremely Cold” From 2025 To 2050!

Share this…FacebookTwitterTrillions are being spent on the completely wrong scenario, an independent veteran meteorologist implies. Instead of warming, we need to worry about the coming 125-year cool period, which has already begun. A former National Weather Service (NWS) meteorologist has spoken out in a just released 49-minute video that looks at climate change and what […]

Share this…FacebookTwitterI just got back to Germany earlier today after spending 2 weeks out in the states. The overnight transatlantic flights after such a period always give me major jetlag. I’m not the type that sleeps on planes and I don’t cope well at all with the time shifts. Lots of photos here to tell […]

Share this…FacebookTwitterJust a quick post today, German site wobleibtdieglobaleererwaermung here writes that whenever one observes a number of datasets, they have one thing in common: There’s no detectable CO2 warming, and there”s verzylittle out there suggesting the warming will continue. Most temperature datasets don’t show warming, sea ice doesn”t show it, lower troposphere temperature data […]

Share this…FacebookTwitterDespite the trillion-dollar campaign aimed at curbing fossil fuels, the use of coal continues to rapidly expand and is acting to finally pull undeveloped countries out of extreme grinding poverty. Investors Business Daily (IBD) here reports “coal use is surging across the globe“, citing the National Academy of Sciences, which says there’s an “unmistakable coal renaissance under way” […] 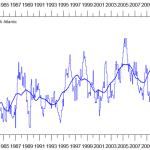 Share this…FacebookTwitterThe Iceland Monitor website here writes the North Alantic island is having its coldest summer in more than 20 years. According to the site: The first thirteen weeks of summer this year have been the coldest in Reykjavik in over twenty years, reveals Icelandic meteorologist Trausti Jónsson. The northern city of Akureyri fares even […]

Share this…FacebookTwitterProfessor Fritz Vahrenholt and Dr. Sebastian Lüning recently took a look at the odd behavior of former IPCC author Peter Wadhams, who now suspects the oil industy of being behind the accidental deaths of three climate colleagues. Three British scientists have lost their lives since 2013 – all three had been involved in Arctic research. […]