We see many articles and posts about the Social Cost of Carbon (SCC) as an excuse for carbon taxes, but nothing about the Social Benefits of Carbon (SBC). The very reason civilization is consuming fossil fuels and producing carbon dioxide is ignored. Carbon-based fuels drive civilization and have done so since man’s taming of fire. They heat and light our homes and places of business, transport us and our goods, and fuel industry. All that energy production has value. Ignoring this value is as insane as if you only entered checks in your checkbook and ignored deposits.

There is great argument about the value of the SCC. The amounts are estimates based on the costs of production and future pollution and impacts primarily, and range from a few dollars per ton of CO2 to a few hundred dollars, depending on the computation method. Here are the U. S. government’s most recent figures:

But all these computations ignore the benefits attached to consuming carbon fuels. At first glance, it may seem difficult to put a value on benefits due to all the myriad ways that fossil fuels are used. Producing electricity is one use, and this was addressed in Boosting Per Capita Prosperity And Energy Consumption Is The Only Way To Care For Our Planet posted here in June 2013. But a more fundamental way to measure the prosperity that fossil fuels provide is to simply compare the per capita Gross Domestic Product (GDP) to the per capita CO2 emissions. The plot below uses data from the World Bank found here and here. The data from 2011 was used because that year had the most complete data. 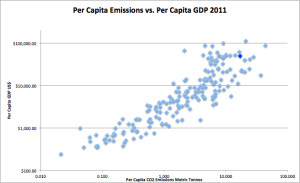 Figure 1 is a plot of emissions versus GDP for 189 countries for which the World Bank has data for 2011. Both axis are logarithmic scales. For a version of this graph with country labels and population, go to this link at GapMinder.

The outliers in Figure 1 are small countries with unusual circumstances, such as Luxembourg and Qatar (upper right). The United States is the dark blue dot at the upper right. The European countries are clustered to the left of the US. It is clear that a high GDP requires high emissions but it doesn’t answer the question as to the value of a tonne of CO2. The next plot answers that question by dividing the per capita GDP by the emissions per capita for each country and plotting that against per capita emissions. 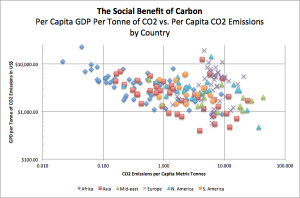 In figure 2, the first 19 countries on the left are in Africa, with very small emissions per capita but high GDP relative to those emissions. The European countries on the right have high emissions but most also have high GDP relative to those emissions. The three lowest GDP dots with high emissions are “‘stan” countries in central Asia. The social benefit of carbon for the 19 African countries is quite high because they use very little carbon now and would benefit greatly from using more. The U. S. SBC is $2,924.84. The country-average SBC of all the points in figure 2 is $3,774.75. The Social Benefit of Carbon is ten to a hundred times the estimated Social Cost of Carbon in Table 1.

The Excel spreadsheet that generated the above graphics is available here.