Solar Analysis Shows That Coming 3 UK Winters Poised To Be Cold Ones – Strong Similarity To SC 12.

So far we’ve been seeing lots of signs of a cold coming winter: birds migrating from Siberia to Britain weeks early, unusual early-autumn snowfalls across Europe, various reports warning of the worst winter in decades etc.

In August, weather analyst Gavin Partridge put up one of his weather videos here. In it he looks at past solar activity, the current Solar Cycle no. 24, and its strong similarity to Solar Cycle no. 12.

What’s fascinating is that there have been a number of studies showing how Great Britain’s winters seem to be highly impacted by solar activity. During weak cycles, Great Britain’s winters tend to be dominated by large blocking highs which steer cold air masses across the country for a larger part of the winter season and so result in colder and snowier winters.

The following chart shows Solar Cycle no. 12 (marked in yellow) compared to all the previous cycles.

Our current solar cycle 24 is shaping to be very similar to Solar Cycle 12 of the 1880s. So will Britain’s winters of Cycle No. 24 follow those of Cycle No. 12?  Partridge tells us in his video.

Partridge states that although Cycle 24 is not as weak as solar numbers 5 & 6, it is substantially weaker than normal and that it is strikingly similar to Cycle no. 12 of the 1870s and 1880s. The question is can we compare the winters of both cycles? Partridge does precisely that and comes up with stunning similarities between the winters of both cycles, depicted in the following chart. 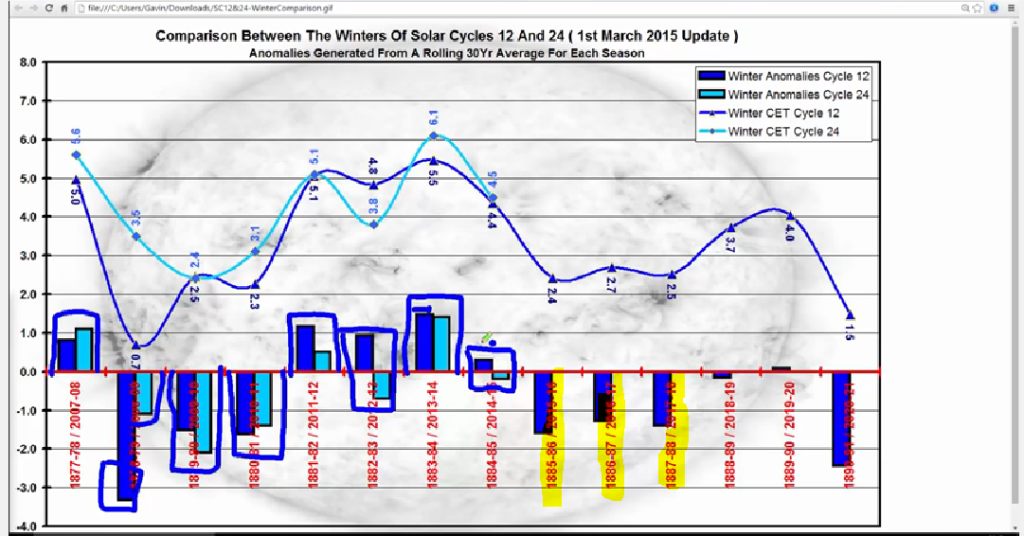 Partridge’s chart above shows how the winter trends of both cycles correspond – almost stunningly.  Seven of eight winters were in agreement regarding whether the winter was colder or warmer than normal – or normal. Last winter (2014/15) was very close to normal, as was the 1884/84 winter.

As both Solar Cycles no. 12 and 24 became active, the respective 4 subsequent winters were milder and averaged above normal. Last winter (2014/15 – which corresponds 1884/85) showed cooling and was close to average – same was the case for the 1884/85 winter.

Should our current solar cycle continue to follow the same course as Solar Cycle 12, then we may have an indicator for the upcoming 3 winters. Using the winters of solar Cycle 12, we see that the next three winters correspond to the winters of 1885/86, 1886/87, 1887/88 (marked yellow in the above chart). They were all colder than normal, which tells us that this coming 2015/16 winter and the 2 winters to follow are also likely to turn out to be colder than normal.

Here we are purely using the similarities solar cycle to previous cycles indicate what the future might hold. Naturally there are many other factors at play. For example did the 1885/86 winter see a strong El Nino and a cold North Atlantic like we are seeing this year?

Of course using only solar cycle similarities is a dubious way to make a seasonal forecast. But on the other hand when 7 out of 8 years correspond to each other, it’s certainly something to keep in the back of your mind. So far the coming UK winter is shaping up to be right on course with Cycle no. 12. We’ll know in a few months time.

11 responses to “Solar Analysis Shows That Coming 3 UK Winters Poised To Be Cold Ones – Strong Similarity To SC 12.”