Veteran meteorologist Joe Bastardi at his latest Weatherbell Analytics Saturday Summary explains why US Secretary of State John Kerry’s claim that the refugee crisis is caused by climate-change-driven drought is total nonsense and is easily disproved.

Secretary Kerry would like to have the public believe that the refugee crisis from Syria and Africa is due to man-made climate drought in the region – and not his abject foreign policy debacle. 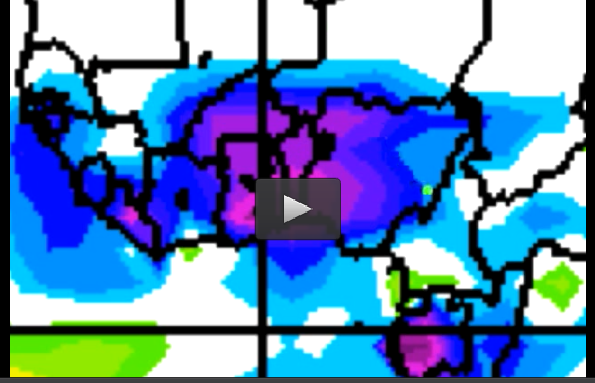 Chart shows Nigeria has been too wet. Source Weatherbell.

At the 2:34 mark Joe shows a precipitation chart for western Africa which clearly depicts how rainfall has in fact been above average over the past 15 years, and thus drought cannot be cited as a reason for the Boko Haram terror group. Bastardi says:

There’s no drought here. And so you cannot blame drought in Nigeria for the rise of Boko Haram.”

The above chart’s blue shows that it’s been too wet in Nigeria, and not too dry. Indeed there are number of scientific papers showing that the Sahara region has been getting greener over the past 30 years.

In the Middle East Bastardi shows that the drought has hit part of Turkey, but that most of Syria has had normal precipitation, and explains that “drought” is the normal climate condition there. At the 4:20 mark the Weatherbell meteorologist puts up a precipitation chart for the Middle East for the last five years: 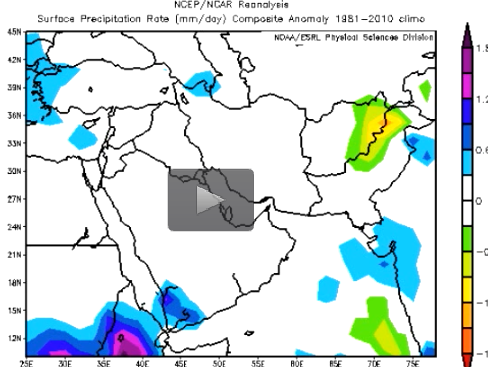 The chart above shows more wet (blue) than dry (yellow/green) with Syria being completely normal. Joe shakes his head at how anyone could even make the claim that Kerry does:

What’s really interesting about all this is, this is just so easy to disprove. […] So I don’t understand why that was said.”

Most readers here do understand why. The falsehood was said because US foreign policy has been a total catastrophe in that region, and now Kerry is desperate for any excuse. And he couldn’t have picked a lamer one. In real life any company or employee blaming poor performance on climate change would be immediately shown the door. This is a blatant unwillingness to accept any responsibility.

The nonsense of climate change leading to terrorism excuse is so clear on so many fronts that it’s a wonder than anyone with even a few points of IQ would take it seriously.