O/t today. I want to share how I lost 20 lbs and totally reduced my triglyceride level, an important factor for heart health.

In his video here, Prof. Ken Sikaris explains why triglyceride level in the blood today is a critical barometer for monitoring your cardiovascular risk and why cholesterol levels are not the crucial factors to watch. Almost everything we’ve been told about evil fat and cholesterol over the past 4 decades is wrong.

So much for consensus.

Sikaris gives us insight on why a high-fat/low-carb diet is healthier for most people. LDL cholesterol, he says, is actually good and has been given a bad name. The real enemy is sugar and refined carbohydrates.

I also used to believe all the cholesterol, low-fat consensus nonsense and 4 years ago found myself some 20 pounds overweight at the age of 52. I had resigned to accepting a future of deteriorating health – just all part of getting older. Then one day my blood pressure got stuck at 180 over 110, and I had the feeling my heart was threatening to go on strike. After an EKG and other tests my doctor put me on beta-blockers and advised me to lose weight by cutting out fat from the diet. Immediately I intensified the old low-fat diet – but no matter how hard I tried to lose weight, nothing worked.

Then 2 years ago, (age 54) I saw a video by Dr. David Diamond (hat-tip DirkH) which resonated, and it showed me how for years and years I had had it all wrong. In it Diamond tells the story of how he solved his weight and heart problems: by going on a high-fat / low carb-diet.

So I also gave it shot and eliminated much of the high carb foods, replacing them with the very foods we were told were killers: eggs, cheese, butter, meat, high fat dairy products, etc. Potatoes got replaced by lots of vegetables and moderate levels of fruit. Nuts and dark (80+%) chocolate has since become a common snack for me.

The results were almost immediate. Everything Diamond said was indeed true. Some two years later, today, I’m pleased to present the latest results: 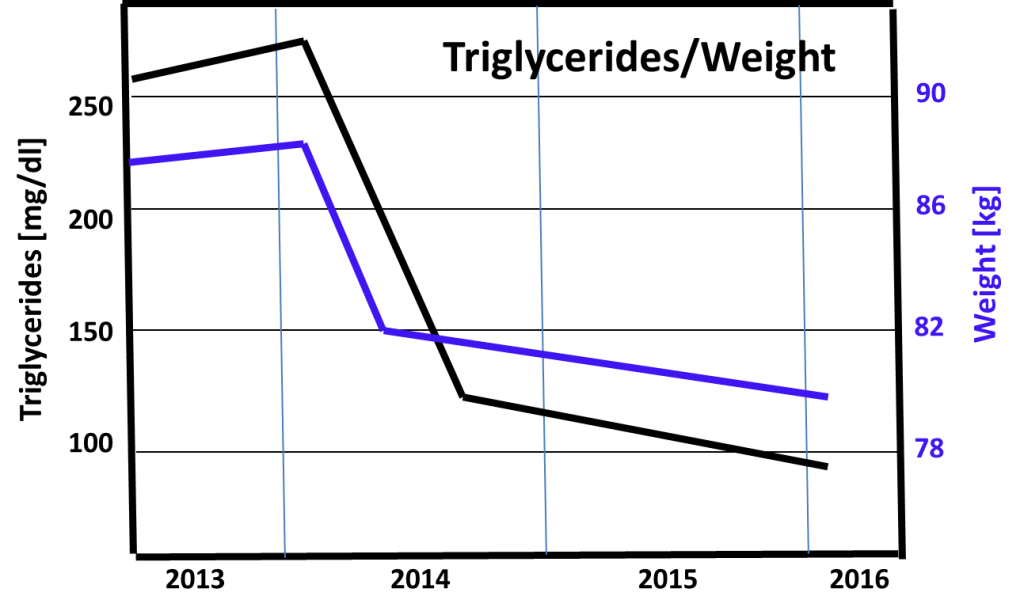 The best thing is that I didn’t need to count calories. I simply ate until I felt satisfied. The cravings and blood sugar roller coaster disappeared. I avoid glutens as well, which for surprisingly many people can make a big difference.

Last week I got back the latest blood results and I’ve plotted my triglycerides, which is now down to a very healthy 94, see above. I’m also off the beta blockers and blood pressure is back to normal. There have been also lots of other benefits, like more energy, better digestion, much happier, etc. Today my weight is stable at about 175 lbs (80 kg).

What’s shocking is that there are still lots of doctors who still believe and preach all the cholesterol nonsense from 40 years ago.