Yesterday I posted on how weather models have been forecasting a bitter cold mid March for much of Europe.

This has now been confirmed by Joe Bastardi at his latest Saturday Summary here beginning at about 3 minutes into the report.

Not only does the GFS show bitter cold for mid March taking hold across Europe but so does the European model. Joe states at 3:22:

Europe has been very cold the past several days and will continue to be cold. It’ll warm up and then turn very very cold there again.”

Powerful La Niña in the pipeline

But what was more interesting in yesterday’s Saturday Summary was the Scripps forecast for the El Niño Southern Oscillation (ENSO), which currently projects a La Niña with a value of -2.64 to be reached by the end of the year, see 18:00 mark. 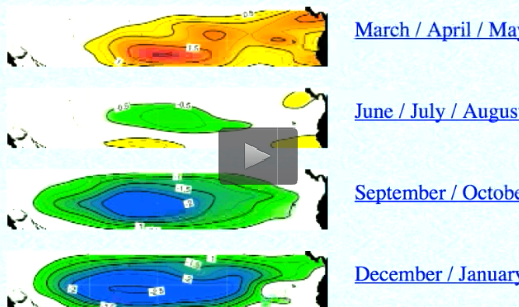 A value of -2.64 is pretty intense. Though Joe does not think the La Niña will get that extreme when all is said and done, it’s clear that a significant event is very likely looming. Joe says Scripps is forecasting a stronger La Niña then what the El Niño was.

I wonder if we are going to be hearing about that from the alarmist side.

The veteran Weatherbell Analytics meteorologist points out that over the past decade the global equatorial Pacific sea surface temperature has been on the cool side more often – a fact that bodes ill for those with bets placed on continued alarming global warming. Expect more data fudging alterations ahead.

Add to this intense La Niña the cooling North Atlantic and solar activity that is tapering off, and all the ingredients are there for inconvenient cooling over the next years.