Imagine a Catholic priest who preaches us Catholic doctrine, but then after Sunday services visits bordellos, gets hammered, commits murder, rapes, molests children, beats women, steals, attends KKK gatherings, etc. over the rest of the week – and does that week after week, year after year. Of course it wouldn’t be long before his flock lost their faith and disappeared. 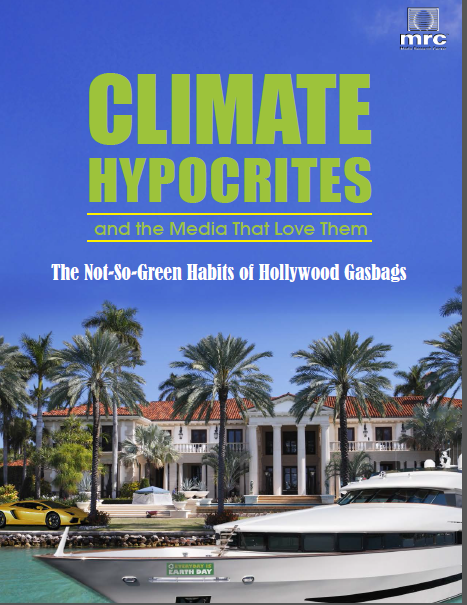 A similar situation is playing out today when it comes to “climate protection” preaching celebrities and prominent personalities as they demand people scale back their lifestyles and accept Spartan living. All the while these same celebrities enjoy rich and lavish lifestyles in huge mansions, private jets and yachts.

The MRC.org here has released a 28-page report on environmental hypocrites who don’t follow what they preach. At the top of the list we find Leonardo DiCaprio, James Cameron and Al Gore – all of whom boast a net worth of well over a 100 million and frequently use private jets to travel all over the world.

The report features 12 celebrities, and it states there are many more and that they are in good company.

Moreover a  2014 study by the British government found that people who claim to worry about climate change use more electricity than those who do not. Wouldn’t you think that after preaching energy savings for over 25 years, these people would by no be among the most energy frugal by now? They aren’t. The MRC adds:

At the 2014 UN Climate Summit, the speakers alone (not the attendees or notable guests for the summit) traveled a grand total of 1,036,537 miles from locations as distant as China, India and Peru. That’s enough miles to circle the equator 41.6 times. […]

Hollywood has many more climate change alarmist hypocrites who weren’t included in this report. Arnold Schwarzenegger, for example, commuted more than 300 miles to work by jet, multiple times a week. Paul McCartney once had his Lexus hybrid car flown from Japan to the UK, which The Huffington Post admitted caused its ‘transport footprint’ to be “over 100 times greater than it should have been.” Not only did Live Earth Concert star Madonna fly all over the world to promote her career, The Daily Mail (UK) reported that she owned “a collection of fuel-guzzling cars, including a Mercedes Maybach, two Range Rovers, Audi A8s and a Mini Cooper S.

Trudie Styler, the wife of Sting, even admitted in 2008 that the couple were climate change hypocrites. According to The Daily Mail (UK), ‘[e]nvironmental experts labelled Sting’s band, The Police, the dirtiest in the world because of the amount of pollution created during last year’s reunion tour of the U.S., Canada, Mexico, Sweden, Germany, the UK, Brazil, Chile, Argentina, Australia, New Zealand, China and Japan.’

The media’s, and particularly the broadcast networks’, lack of coverage of this hypocrisy is inexcusable. The Society of Professional Journalists Code of Ethics states that journalists need to ‘Provide context. Take special care not to misrepresent or oversimplify in promoting, previewing or summarizing a story.’ Yet, in covering for these celebrities, the media broke this rule in order to promote a liberal, climate change alarmist agenda.”

Posted in Lifestyles of the Rich and Alarmist | 7 Responses