Unfolding is the latest chapter in the sad state of climate science and the tragic consequences scientists face when they decide to go political without having the experience to do so.

One has to wonder what these people were thinking when they expected dissenters to just roll over and waive their precious free speech rights.

A Virginia judge has ruled in favor of The Competitive Enterprise Institute (CEI) in a Virginia Freedom of Information Act lawsuit against George Mason University, which was ordered yesterday to release documents and e-mails related to a group of scientists calling for the prosecution of organizations that promote manmade climate change skepticism – all under the US Racketeer Influenced and Corrupt Organizations Act (RICO).

WUWT sees the scandal surrounding the controversy as one that is even more serious than the 2009 “Climategate” – an affair where e-mails exposed climate scientists exaggerating climate trends, manipulating the peer-review process, and skirting the freedom of information act.

A total of 5 PDFs have been released concerning George mason University, and with climate scientist Jagadish Shukla with a leading role.

As one reads the e-mails, it quickly emerges that some of the involved scientists (unwittingly) meandered out of their academic realm, with which they are comfortable and familiar, and into a political one that is very unfamiliar to them. Their scheme was ultimately aimed at intimidating and silencing scientific dissent.

Odds “slim to none”

Early on they were even advised that their case was very weak, and probably best left aside. For example Ed Maibach admitted (000003) that they really didn’t have much of a case:

Yet he seemed unable to resist the opportunity of getting “lots of media attention” (000006):

Maibach even fancied front page coverage in the Washington Post. What harm could it do to try?

We also see Shukla announcing (000003) how he decided to become politically active, that he was “new” at it, and wrote that the issue is more about politics than science:

Moreover he added that he had a “dedicated activist” on board for the science-based, world-saving political endeavor on which they were about to embark:

Clearly the political arena was a new one for scientist Shukla – one he seriously underestimated. Unfortunately he would soon find out, that at that the level he was entering, it was absolutely no place for political amateurs.

Threatening organizations and scientific dissenters with the powerful crime-fighting RICO Act was taken extremely seriously by dissenting individual scientists, bloggers, organsations etc. They in turn responded accordingly and moved vigorously to defend their rights against what they viewed as a serious fundamental human rights threat. Before too long revelations and allegations surfaced – and the arena became heated.

By early October, after serious allegations were made about Shukla’s salary and compensation, the blowback became too harsh. Shukla penned a letter (000033) backpedaling, claiming that their letter to IGES outlining their RICO effort was “misinterpreted” and that it “was not at all the case“: 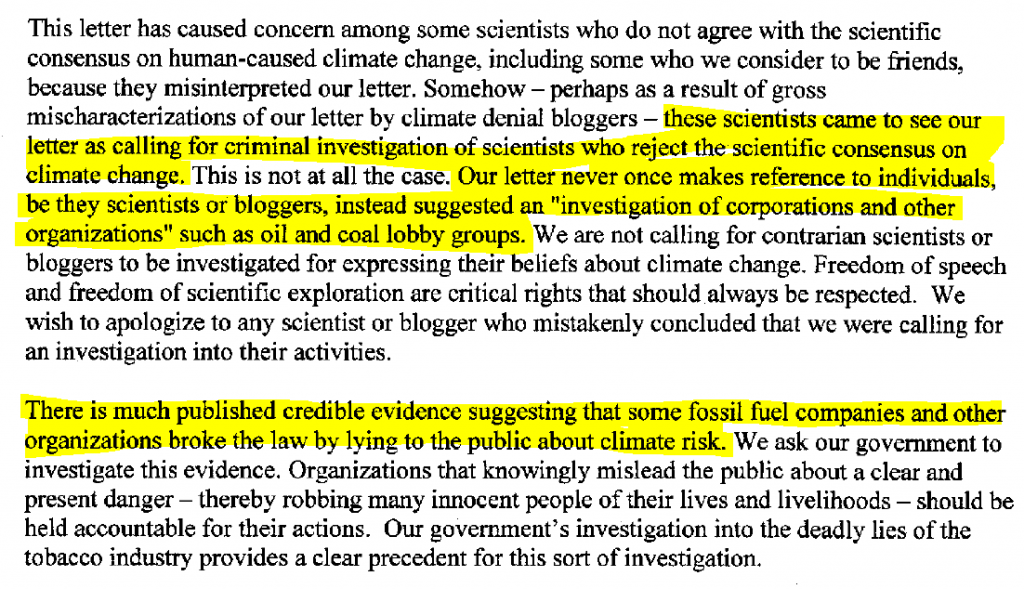 He asserted the scientists didn’t mean to send the message that by involving RICO they were trying to silence individual and blogger dissent. Their purpose, instead, was only to punish organizations that might be funding the dissent. Those on the other side saw it differently. Indeed, words do need to be chosen carefully.

Moreover in the letter Shukla claims “much published credible evidence“, giving the impression of a solid case. Yet recall how in July he was told (000003) by Maibach that they had little to go on, that the chances of the Department of Justice (DOJ) pursuing the case were “slim to none”.

As one reads all the e-mails, it becomes apparent that the scientists-gone-activist have really woven themselves into a real mess, now that they have been exposed.

It’s a painful way for scientists to learn that it’s better to stick to science – and to let the politicking to others.

In any case they sought publicity – and now they’re getting it.