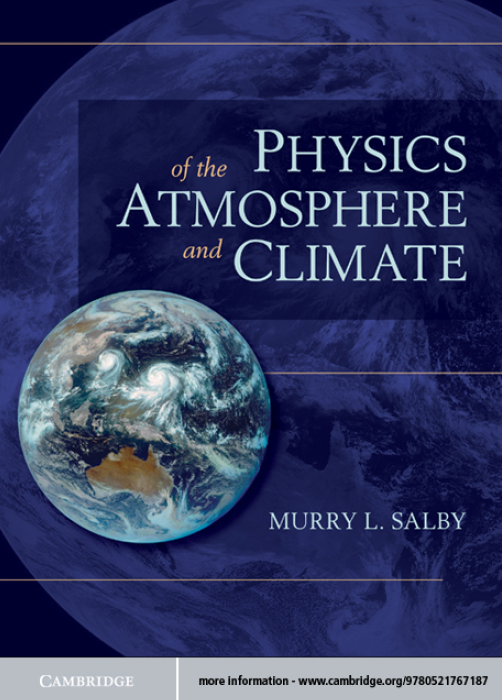 We routinely read from fellow skeptics that they wish Dr. Murry Salby’s research could be made available in written form, or perhaps in a peer-reviewed paper.

Indeed we do have access to his Youtube lecture research (at least a written summary of it) from an even better source than peer-reviewed paper: Dr. Murry Salby’s 2012 university-level textbook: Physics of the Atmosphere and Climate.

Here is a pdf link to the full textbook written by a world-renown expert on atmospheric physics (he’s published several dozen papers in the scientific literature on the subject). We therefore can effectively say that a skeptical view of the CO2-dominated climate paradigm is actually textbook science, not “fringe” science for the “3 percent”.

Below I’ve compiled a short list of some of the written statements from the textbook (emphasis added):

(b) CO2 only accounts for a small portion of the greenhouse effect relative to water vapor/cloud; and

Together, emission from ocean and land sources (∼150 GtC/yr) is two orders of magnitude greater than CO2 emission from combustion of fossil fuel. These natural sources are offset by natural sinks, of comparable strength. However, because they are so much stronger, even a minor imbalance between natural sources and sinks can overshadow the anthropogenic component of CO2 emission.”

The vast majority of that [greenhouse] warming is contributed by water vapor. Together with cloud, it accounts for 98% of the greenhouse effect.” pg. 249

Surface temperature depends on the atmosphere’s optical depth. The latter, in turn, depends on atmospheric composition through radiatively active species. Water vapor is produced at ocean surfaces through evaporation. Carbon dioxide is produced by decomposition of of organic matter. These and other processes that control radiatively active species are temperature dependent.”

Revealed by natural perturbations to the Earth-atmosphere system, the sensitivity accounts for much of the observed variation of CO2 emission on interannual time scales (Fig. 1.43). It establishes that GMT cannot increase without simultaneously increasing CO2 emission – from natural sources.”

The results for the two periods are in broad agreement. Together with the strong dependence of CO2 emission on temperature (Fig. 1.43), they imply that a significant portion of the observed increase in r˙CO2 derives from a gradual increase in surface temperature.”

Warming of SST (by any mechanism) will increase the outgassing of CO2 while reducing its absorption. Owing to the magnitude of transfers with the ocean, even a minor increase of SST can lead to increased emission of CO2 that rivals other sources.”

The resemblance between observed changes of CO2 and those anticipated from increased surface temperature also points to a major inconsistency between proxy records of previous climate. Proxy CO2 from the ice core record (Fig 1.13) indicates a sharp increase after the nineteenth century. At earlier times, proxy CO2 becomes amorphous: Nearly homogeneous on time scales shorter than millennial, the ice core record implies virtually no change of atmospheric CO2. According to the above sensitivity, it therefore implies a global-mean climate that is “static,” largely devoid of changes in GMT and CO2. Proxy temperature (Fig. 1.45), on the other hand, exhibits centennial changes of GMT during the last millennium, as large as 0.5–1.0◦ K. In counterpart reconstructions, those changes are even greater (Section 1.6.2). It is noteworthy that, unlike proxy CO2 from the ice core record, proxy temperature in Fig. 1.45 rests on a variety of independent properties. In light of the observed sensitivity, those centennial changes of GMT must be attended by significant changes of CO2 during the last millennium. They reflect a global-mean climate that is “dynamic,” wherein GMT and CO2 change on a wide range of time scales. The two proxies of previous climate are incompatible. They cannot both be correct.”

These statements fully correspond with some of the main themes of his lectures.