The mean temperature for Germany in August, 2016, was 17.7°C, which turns out to be 0.2°K colder than the figure reported in the overheated August 30, 2016 press release issued by the German DWD national weather service.

The August result makes the month 0.7°C warmer than the 1981-2010 mean. Nothing extraordinary.

However, the DWD has had a habit of overstating monthly mean temperatures in its press releases to the media.

German climate and weather blogsite wobleibtdieerderwaermung.de here reports that this has been the fifth false monthly report by the DWD so far this year – suggesting that the DWD is indulging in climate warming propaganda.

What follows is a chart of August mean temperatures in Germany since 1881:

The DWD August press release shouted that “August 2016 was too warm!”

The wobleibtdieerderwaermung.de site scoffs at the DWD claim that August “was too warm!”, reminding readers that snow fell down to elevations of 2000 meters in all three summer months, with record lows being set at a number of locations. The German site writes:

The 0.7°K deviation for the summer of 2016 in Germany is well within the normal range for mean summer temperature over the years – the summer was neither too cold nor too warm. It was quite normal. The DWD press release is false.”

The site points out that there was in fact only one single heat wave this summer, with maximum temperatures reaching above 30°C at least five days in a row or more, and it took place at the very end of August – and only in parts of Germany.

The big cities of Hamburg, Berlin, and Munich did not see a single heat wave in the summer of 2016, as the following charts illustrate: 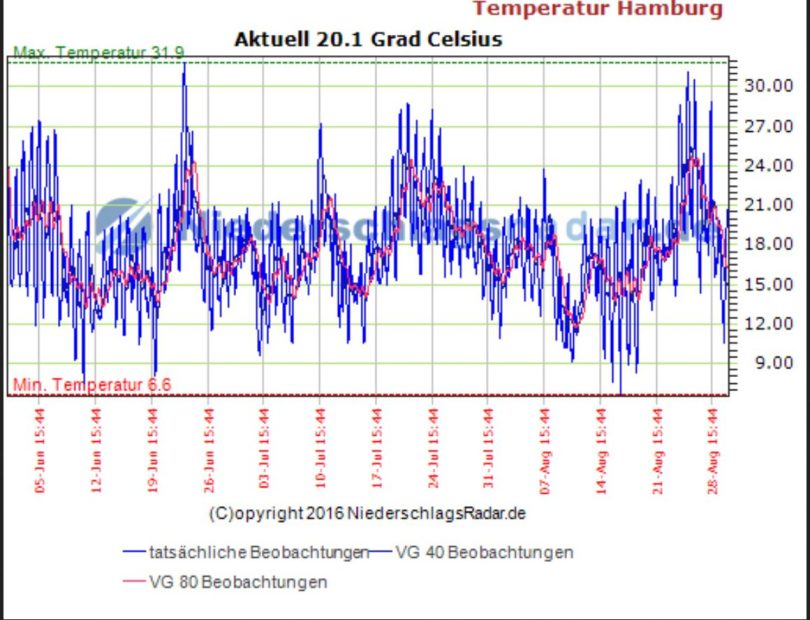 The wobleibtdieerderwaermung.de site suggests that the DWD is exaggerating to make it look like Germany had a hot summer when in fact it was nothing of the sort. The site writes: the DWD August 30th press release tried to produce the impression of multiple widespread heat waves in Germany this summer, when in fact this was not the case at al.

Moreover an NOAA reanalysis of Europe up to August 28 shows that the greater part of the European continent had a much cooler than normal August 2016: 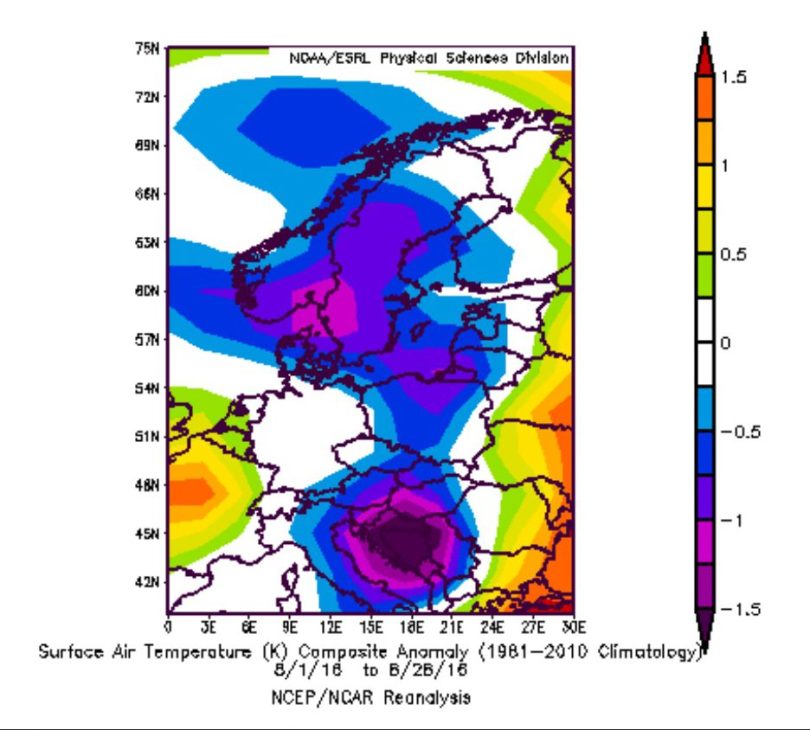 Over the past months global temperatures have cooled, Germany is much cooler than it was 1 year ago, and the area of thick Arctic ice has tripled in size over the past four years. Yet, that doesn’t keep the DWD from announcing a summer that was “too warm” with a deviation of only +0.7°C.