Scientists: The Arctic Was Sea-Ice-Free, 19°C Warmer 4 Million Years Ago — And Yet Polar Bears Somehow Survived

“Whether polar bears are 350,000 years old or 6 million years old, unless we take action to curb greenhouse gas emissions, they face a future where the climate will continue to warm. And this warming will be unlike anything polar bears have survived before.”  —  Polar Bears International 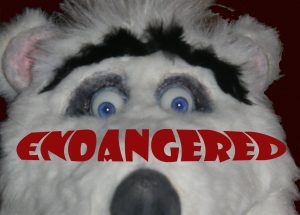 During the Pliocene, or from about 3 to 5 million years ago, subarctic regions of the Northern Hemisphere (Norway, Iceland, Canada) were up to 10°C warmer than they are now,  and the Arctic region itself was as much as 19°C warmer than now, with sea-ice-free summers and no permafrost.  All this warmth occurred while CO2 concentrations were well below today’s levels.  Polar bears somehow managed to survive in these balmy Arctic and subarctic climates.

“Pollen from three subarctic sites in the Norwegian Sea, northern Iceland and Labrador Sea indicate that mid-Pliocene January temperatures in Norway, Iceland and southeastern Canada were 4 to 10°C warmer than today (Willard 1994). … Evidence of both mixed deciduous/coniferous and coniferous forests places mean July temperatures 10°C warmer than today [in Arctic Canada] (Vincent 1990). In addition, northwestern Alaska air and sea temperatures during peak Pliocene interglacials were considerably warmer than present, by 7 to 8°C, with no permafrost, and absent or severely limited sea ice (Carter et al. 1986; Kaufman and Brigham-Grette 1993).”

From the press release, Robinson states that Arctic summer sea surface temperatures were about 10-18°C (50 – 64°F) on average 4 million years ago, compared to 0°C (and lower) during summers today.

“The U.S. Geological Survey found that summer sea-surface temperatures in the Arctic were between 10 to 18°C (50 to 64°F) during the mid-Pliocene, while current temperatures are around or below 0°C (32°F).”

“The consensus among these proxies suggests that Arctic temperatures were ∼19 °C warmer during the Pliocene than at present, while atmospheric CO2 concentrations were ∼390 ppmv.”

“[A] seasonally ice-free marginal and central Arctic Ocean was common … regionally during the early Holocene [6,000 to 10,000 years ago]. … Some species thought to be dependent on summer sea ice (e.g., polar bears) survived through these periods.”

Arctic Also Much Warmer A Few Thousand Years Ago, With Sea-Ice-Free Summers

Although far less pronounced, the Arctic climate was also much warmer than now (by 2° to 3°C) throughout significant portions of the last 10,000 years, warm enough to elicit sea-ice-free summers (or far less sea ice than exists presently).  Somehow, polar bears survived during these warmer climates.

“We report bromine enrichment in the Northwest Greenland Eemian NEEM ice core since the end of the Eemian interglacial 120,000 years ago, finding the maximum extension of first-year sea ice occurred approximately 9,000 years ago during the Holocene climate optimum, when Greenland temperatures were 2 to 3 °C above present values.”

(press release): “Researchers have found that 8000 years ago the Arctic climate was 2 to 3 degrees warmer than now, and that there was also less summertime Arctic sea ice than today.”

“Between 1000 and 1300 average summer temperatures were about 1°C higher than today, with the mean annual temperature higher by perhaps 4°C in a largely ice-free Arctic.”

“Several studies suggest that the Early Holocene (∼6000–10,000 years BP [before present]) experienced less summer-sea ice than at present. …. [S]ea ice during the Early Holocene potentially could have moved over to a seasonal regime with sea ice-free summers due to the insolation [solar radiation] maxima the Earth experienced at that time.”

According to scientists, not only was Arctic sea ice extent much lower than it has been in recent decades a few thousand years ago, it was lower during the 1700s, 1800s, and early 1900s too, when CO2 levels were still quite “safe” at about 300 ppm and less.  In fact, during the 1880s to 1940s period, when Arctic temperatures were warmer than they have been recently, the Arctic’s sea ice cover began forming more than one month later than it has in recent decades (or melted more than one month earlier than it has been) (Durantou et al., 2012).   And somehow polar bears survived these Arctic conditions.

“Sea surface temperature [Arctic Ocean, Canada] between ∼ AD 1885–1935 are warmer by up to 3°C with respect to the average modern temperature at the coring site. For the period ∼ AD 1887–1945, reconstructed sea ice cover values are on average 8.3 months per year which is 1.1 months per year lower than the modern values.” 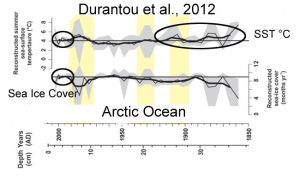 “[T]he series of climatic oscillations affecting the northern hemisphere are linked through a teleconnection sequence between the oceans and the atmosphere called “stadium wave” (Wyatt et al., 2011). This teleconnection plays a crucial role in climatic changes, notably in exchanges of heat fluxes within the Arctic through the Bering Strait (Woodgate et al., 2005). According to our results, the PDO pattern is closely linked with most of the sea-surface condition variability in the study area through upwelling events of Pacific origin.”

According to Zhang and co-authors (2015), sea ice extent in recent decades has followed the patterns of the AMOC and hovered around the average of the last 3500+ years, with many periods (for example, during the mid-1700s) having much lower sea ice extent anomalies than during the last few decades of human influence — or when polar bears have been classified as endangered.

“Observations reveal multidecadal variations in Arctic surface air temperature (SAT), and amplified Arctic warming similar to that observed in recent decades also occurred during 1930–1940. Both observations and climate modeling results suggest that the reduced Arctic sea ice is crucial for the early twentieth century Arctic warming, and internal variability is a very likely cause for that event.”

“The estimated increase in the Atlantic heat transport into the Arctic since 1979 is consistent with the strengthening of AMOC since the mid 1970s implied by indirect evidence such as the AMOC fingerprints, and could have contributed substantially to the observed summer Arctic SIE decline.”

Somehow, polar bears survived an Arctic climate that was as much as 19°C warmer than now a few million years ago, with balmy (66°F), sea-ice-free summers.

Currently, polar bears are not only surviving, their numbers are growing, leading scientists to conclude that they cannot find support for the perspective that polar bears “are currently in any sort of climate crisis.”

“Subpopulation growth rates and the probability of decline at current harvest levels were determined for 13 subpopulations of polar bears (Ursus maritimus) that are within or shared with Canada based on mark–recapture estimates of population numbers and vital rates, and harvest statistics using population viability analyses (PVA). … Considering both TEK [traditional ecological knowledge] and scientific information, we suggest that the current status of Canadian polar bear subpopulations in 2013 was 12 stable/increasing and one declining (Kane Basin). We do not find support for the perspective that polar bears within or shared with Canada are currently in any sort of climate crisis.”

Because of the tendentious preference to ignore observational and paleoclimate evidence that would not appear to portend their demise, polar bears will continue to be classified as an “endangered” species.  That’s what the concocted narrative of human-caused climate alarm dictates.

25 responses to “Scientists: The Arctic Was Sea-Ice-Free, 19°C Warmer 4 Million Years Ago — And Yet Polar Bears Somehow Survived”