Contrary to what is often claimed, Arctic sea ice is not in a death spiral, and has been stable for the past 10 years.

Yesterday Japanese skeptic blogger Kirye informed at Twitter that the sea ice volume and area rates of growth for September and early October this year are astonishingly rapid and at a pace we are accustomed to seeing in late October and November:

Volume is now well near normal level at over 9000 cubic kilometers. Sea ice area can be seen here.

Although Arctic sea ice reached a rather low level this year, September’s rate of volume growth was nothing less than spectacular, skyrocketing from some 6000 cubic kilometers to a bit over 9000 cubic kilometers in just a matter of three weeks! The impressive rate of growth is shown graphically by the next chart: 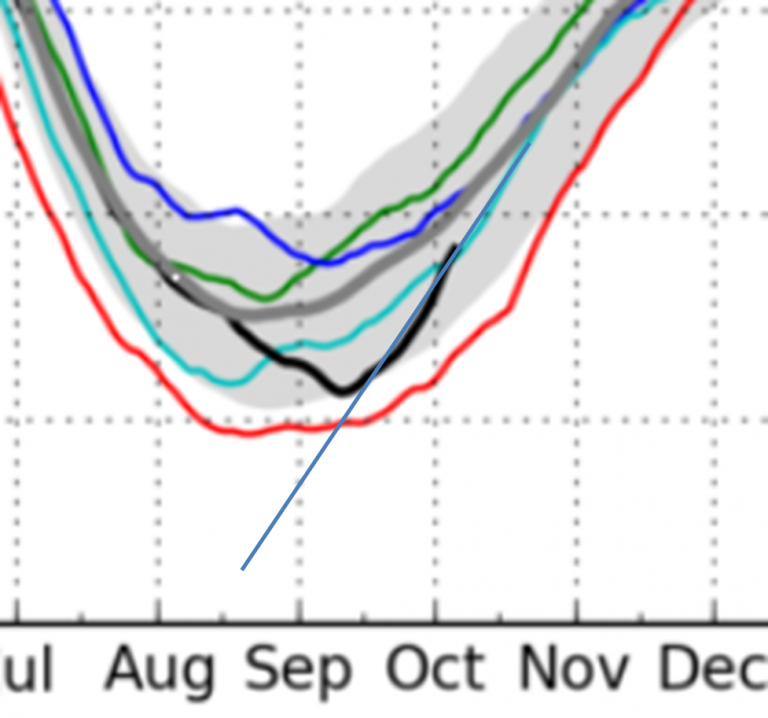 Using the global warming theory on Arctic sea ice extent, i.e. it’s due to temperature, this year’s impressive growth would tell us that the Arctic must have been unusually frigid over the past three weeks. But looking at the Arctic temperature above 80°N latitude here, we see that temperatures have in fact been well above average. So what’s going on?

How can ice be forming so rapidly when it’s been mild over the past few weeks? What can we deduce from all this?

It tells us that Arctic sea ice extent has a lot more to do with other factors other than surface temperature. Critical factors include, ocean currents and cycles, wind conditions from weather patterns, and so on. So the next time an alarmist tries to tell us that sea ice loss is proof of warming, then just point out that there’s a lot more to it than just surface temperature. This year shows that in a very profound way.

The system is far more complex than just a trace gas (one, by the way, that happens to be a convenient vehicle to mass regulation).