Only 53% Of Climatologists & Meteorologists, 36% Of Engineers & Geoscientists, 19% Of Agronomists Are ‘Consensus’ Believers

Americans’ beliefs about climate change were recently surveyed by the Pew Research Center, and the results were made public a few days ago.  Pew pollsters found that a combined 51% of Americans agree that (a) there is no clear evidence the Earth is warming, or (b) natural factors are the main cause of climate changes.  Therefore, just 48% of Americans believe the Earth is getting warmer, and this warming is mostly caused by humans.  This belief percentage has essentially remained unchanged for the last 10 years, or since the survey was first conducted in 2006. 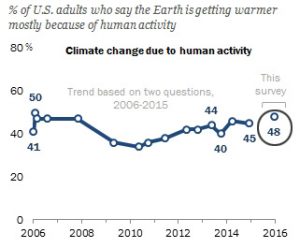 One key question in the survey pertained to Americans’ perception of the scientific “consensus”.   The Pew Research Center found that just 27% of Americans believe that “almost all” climate scientists maintain the belief that changes in climate are mostly caused by humans.

Of course, the presupposition underpinning this opinion question is the claim that upwards of 97% climate scientists — translated into “almost all” for the Pew survey — believe that climate changes since the mid-20th century have been mostly (i.e., more than 50%) caused by humans.   This oft-cited 97% figure was derived from a subjective abstract-counting exercise conducted by “Skeptical Science” blogger John Cook and colleagues (Cook et al., 2013, “Quantifying the Consensus…”).  Selected abstracts from 11,944 scientific papers published between 1991 and 2011 were used for the sample size, and of those papers just 65 (0.5% of the 11,944) were classified by Cook and his fellow raters as endorsing the specified Category 1 position that “Explicitly states that humans are the primary cause of recent global warming” (Legates et al., 2013).  This wouldn’t do, of course.  So, to ultimately reach the 97% endorsement percentage the Cook team had set out to obtain in the first place, they intentionally combined the (65) Category 1 quantified “consensus” statement papers  with the (934) Category 2 and (2,933) Category 3 endorsement papers that only needed to state (2) or just imply (3) that humans are a cause of climate changes.  These Category 2 and 3 papers did not quantify the contribution or indicate humans are a primary (>50%) cause of climate change, but they were nonetheless combined with Category 1 papers anyway.

Of course, nearly all scientists would agree that a human contribution greater than 0% exists, or that humans can be a cause — however modest  — of some degree of climate change.  So by combining the very high endorsement rates from Categories 2 and 3 (that even most skeptics acknowledge, as they agree humans contribute to climate change to some degree) with the negligibly small endorsement rates for Category 1 (just 65 papers), and by excluding many hundreds of papers from consideration that were published by scientists questioning the theory, Cook et al. (2013) were ultimately able to get away with proclaiming that 97% of scientists believe that climate changes since 1950 have mostly been caused by humans.

But as the evidence from the Pew survey  indicates, despite their best efforts, John Cook and cohorts have not been able to convince the general public that subjective abstract-counting exercises are a sound or scientific means to gauge “consensus.”  As mentioned, only 27% of Americans believe that “almost all” (i.e., 97%) climate scientists maintain the belief that humans are the primary cause of changes in the climate system.  Not only that, just 28% Americans agree that climate scientists even understand (“very well”) what factors cause climate changes. 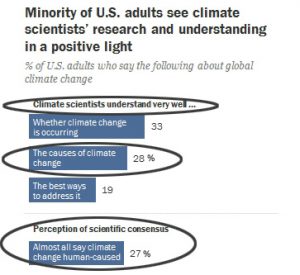 And Americans may be right.  According to analysis found in the peer-reviewed scientific literature (Prokopy et al., 2015, Lefsrud and Meyer, 2012, Stenhouse et al., 2016), surveys of professional climatologists, engineers, geologists, and agronomists indicate that the percentage of these scientists who believe that changes in the climate system are primarily caused by humans falls abysmally short of the claimed 97%.  In fact, these studies reveal that only 53% of climatologists and meteorologists, 36% of professional engineers and geoscientists, and 19% of agronomists believe that changes in the climate system are mostly human-caused.

“In 2012, a total of 22 state and extension climatologists were selected through a purposive sample to represent main outlets of publicly available and location-specific climate information in the region. … About 53% attributed climate change primarily to human activities.”

“Extension educators are a unique set of agricultural advisors who serve to connect and translate research from universities to farmers in order to decrease risk to the farm enterprise and increase productive capacity and resilience. Typically, Extension educators have at least a Masters degree and are trained in agronomic sciences, which may not include climate sciences. … [O]ver 19% attribut[e] climate change primarily to human activities.”

Among professional engineers and geoscientists trained in the physical sciences, only 36% are believers in the “consensus” position that humans are the “main or central” cause of changes in the climate system.

“The largest group of APEGA respondents (36%) … express the strong belief that climate change is happening, that it is not a normal cycle of nature, and humans are the main or central cause.”

Conflict about Climate Change at the American Meteorological Society: Meteorologists’ Views on a Scientific and Organizational Controversy

“A web-based survey was sent to all professional (i.e. non-student) members of the AMS in December 2011. …  Members who said the global warming of the last 150 years was mostly caused by human activity (53% of full sample).  … Members who are convinced of largely human-caused climate change expressed that debate over global warming sends an unclear message to the public.  Conversely, members who are unconvinced of human-caused climate change often felt that their peers were closed-minded, and were suppressing unpopular views.”

To summarize, the American public is about as likely to believe that climate changes are mostly caused by humans as are meteorologists and climatologists (48% vs. 53%, respectively).  And Americans in general are much more likely to believe that humans are the primary cause of climate changes as professionals trained in the physical sciences: 48% of U.S. citizens are believers, whereas ~20-35% of professionals with physical science degrees (engineers, Earth scientists, agronomists) are believers.

To put it non-delicately, the claim that “almost all” scientists (i.e., 97%) believe that most changes in the climate system are caused by humans is … bunk.

And most Americans already knew that.

33 responses to “Only 5333 Of Climatologists & Meteorologists, 3633 Of Engineers & Geoscientists, 1933 Of Agronomists Are ‘Consensus’ Believers”