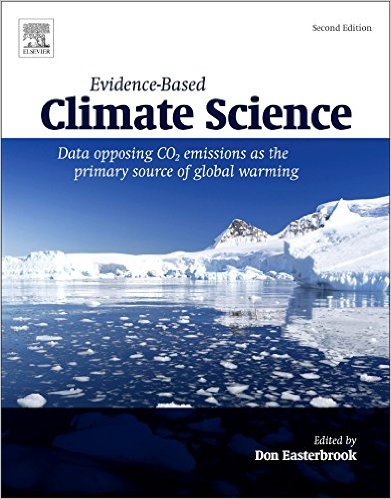 At their site Lüning and Vahrenholt write that the emphasis of the peer-reviewed book is on natural cycles, which they say “unfortunately were not adequately accounted for in the IPCC models“.

The book comprises 21 different articles from a groups of authors, among them a paper by geologist Dr. Sebastian Lüning and Prof. Fritz Vahrenholt which looks at solar cycles. The abstract can be read here (click on Chapter 16).

NTZ contacted Dr. Lüning and asked about what he thinks the results of the book mean and about the status of climate science thus far. Here’s the answer He sent (emphasis added):

We identified a clear mismatch between climate models and paleoclimate data with respect to the role of solar activity changes. This is an issue that needs to be urgently addressed open mindedly by the climate science. Before wide ranging political conclusions are drawn and action taken, obvious model weaknesses need to be seriously addressed and clarified.

Our new paper does not answer this point quantitatively but indicates that there have always been warming and cooling phases in the past 10,000 years which in most cases appear to have run in parallel with solar activity changes. These natural climate and solar changes are of “millennial-scale” with a typical cycle length of 1000-2000 years. A key task is to better understand how much of the warming of the past 120 years is part of this millennial-scale cyclicity and how much is driven by CO2. All facts point at the direction that a sigificant part of the recent warming is actually due to an increase in solar activity whereby the sun has reached some of the strongest intensities of the entire past 10,000 years during this period.

In our paper (Chapter 16) we urge climate modellers to run alternative scenarios which honour the historical climate/solar relationship. Notably, current climate models are not able to reproduce the historical climate cyclicity of the past 10,000 years. With this “hindcast” failure, these models normally would be reliable for future modelling. An increased role of the sun may in the end mean that the warming until 2100 is much less than is currently pognosed, possibly less than 1°C.”

The book is available at Amazon, or can be ordered from the Elsevier online store.