The German Historical Museum published at its website a fascinating account of one of the continent’s worst disasters. What follows are some excerpts. You can read the whole account by clicking on the link.

It shows that bad weather has nothing to do with trace gas CO2 and “climate catastrophe” is nothing new. 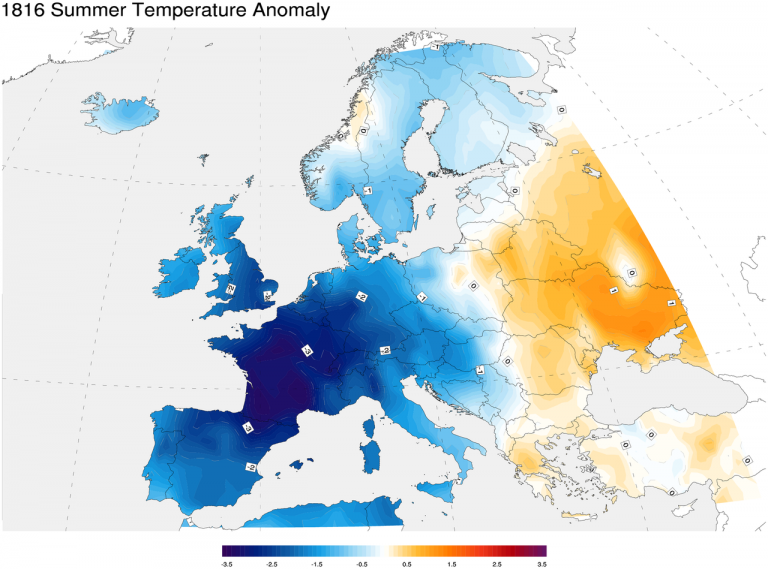 The year without a summer: how Europe descended into climate chaos

The year 1816 is barely four months old and the people of Upper Swabia are already facing a catastrophe of Biblical proportions. […] in the months that follow, the rain falls and the wind howls without mercy – and snow even falls on the Swabian Jura mountains in July. … The consequences are fatal, not just for this region on the fringes of the Alps, but for all of central and western Europe.

The failed harvest is followed by hunger and chaos. Grain prices go through the roof, cattle perish or have to be slaughtered as a last resort, and people start looting. Soon, the entire supply system collapses. … This is followed by mass emigration: hordes of people leave … Baden and Württemberg are faced with exodus.

The rural population, in particular, turns to supernatural explanations, seeing the extreme weather as a punishment from God. ….a huge eruption of the Mount Tambora volcano on the island of Sumbawa (now part of Indonesia) in April 1815 is to blame for the plight currently experienced in Europe.

Thomas Stamford Raffles, the British Lieutenant-Governor of Java […] thought a cannon was being fired in the immediate vicinity. […] however, was some 800 kilometres away from Tambora. … It is now clear that this was one of the largest eruptions in modern human history.

…huge quantities of sulphuric gas were released. …aerosol clouds formed…arrived in the northern hemisphere, …and absorbed large amounts of sunlight. As a result, the weather in Europe went haywire. …

Prices spiralled further out of control, many people were left destitute… Anti-Semitism also flared up: Jews were vilified … there were even violent attacks on the Jewish population in many places.”

Like they falsely blamed God for punishing the people back then, today we find ourselves not a bit wiser barking again up the wrong tree.

7 responses to “Europe’s Descent Into Climate “Catastrophe Of Biblical Proportions” …200 Years Ago In 1816!”