A couple of days ago I reported here how Joe Bastardi warned that Europe would soon be turning cold and wintry. Well, he hasn’t backed off at all from that forecast and appears to be gaining more confidence with it.

Although the timing may have shifted about a bit , the overall pattern remains: cold Arctic cold and winter precipitation are about to seize the European continent.

At the 2-minute mark Joe mentions the 11-16 day forecast for Europe, where the GFS model shows “brutal cold” across Europe.

Then at the 3:35 mark he focusses in on the European continent, showing a chart of projected snowfall (in inches!): 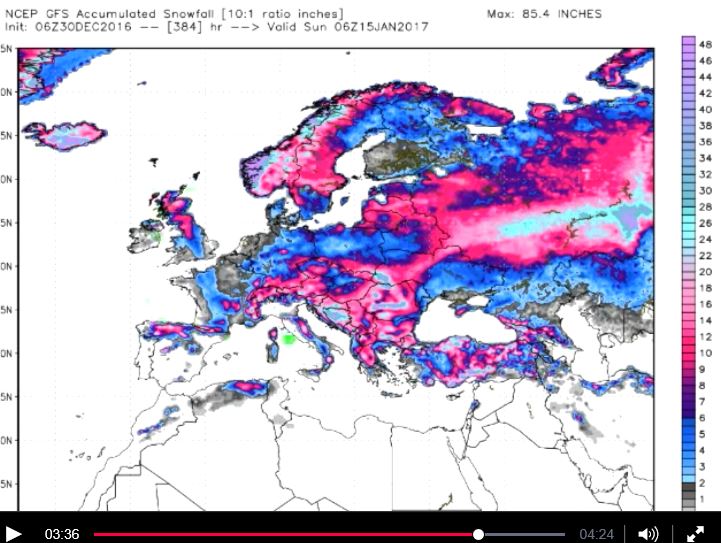 This is going to be a huge deal. You’re going to see the weather in Europe making global headlines as it gets covered with tremendous amounts of snow. And when you look at this […] Europe is brutally cold […] and Europe, get ready because there’s going to be all sorts of you know what is going to break loose over there.”

The forecast is still a couple of weeks out, but it is solidifying and the watch by now ought to be taken seriously. For me it is time to go out and buy that back-up generator – and don’t count on wind and solar energy to be there in a time of need! Most solar panels will likely be buried until spring.

In fact global headlines have already been made, with reports of massive snowfall in Turkey, Japan and North America, along with extraordinary cold and snow across all of Siberia and Russia.

It’s only natural that some obstinate fans of global warming are not thrilled about hearing such news, and they lash out childishly — steadfastly remaining convinced that snow is a thing of the past and is not supposed to happen anymore.

Moreover meteorology for the Bastardi family has become a generational thing. His father was a successful weatherman, and now Joe’s son is following the family tradition as well. If there ever was such a thing as meteorological genes, the Bastardis certainly seem to have them. These guys have precipitation running through their veins!

And of course mistakes are made, that’s all part of the weather forecasting business — especially when forecasting more than 7 days out.