Last Wednesday evening, Florida State University graduate student Levi Cowan showed at his Tropical Tidbits site his analysis of what was later to develop into tropical storm Nate in the Gulf of Mexico.

His analysis exposed the great differences – thus huge uncertainty – between the US GFS and the European ECMWF models for the early projected tracks of Nate. 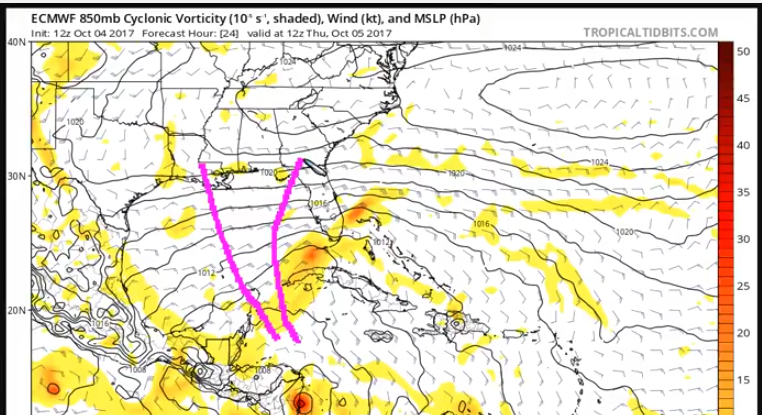 In the above figure, the NOAA’s GFS model run takes the storm track over Louisiana (left) while the European showed landfall occurring some 400 miles away to the east at the start of the Florida panhandle (right). If that doesn’t illustrate the huge uncertainty within models, then what does? Source: Image cropped from Tropical Tidbits.

Keep in mind that these two projections for Nate coming from two different models are for just 4 days out, despite being generated by super computers that have been fed with reams of data.

In Levi’s latest analysis here, he shows that the latest storm track now favors the GFS and that the European had been flawed.

Great uncertainty even with forecasts just hours ahead

Meanwhile on Thursday storm Xavier passed through Northern Germany. Mid morning on Thursday the German DWD national weather service tweeted here how the forecast track of the storm over northern Germany over the coming 6 hours was still uncertain! 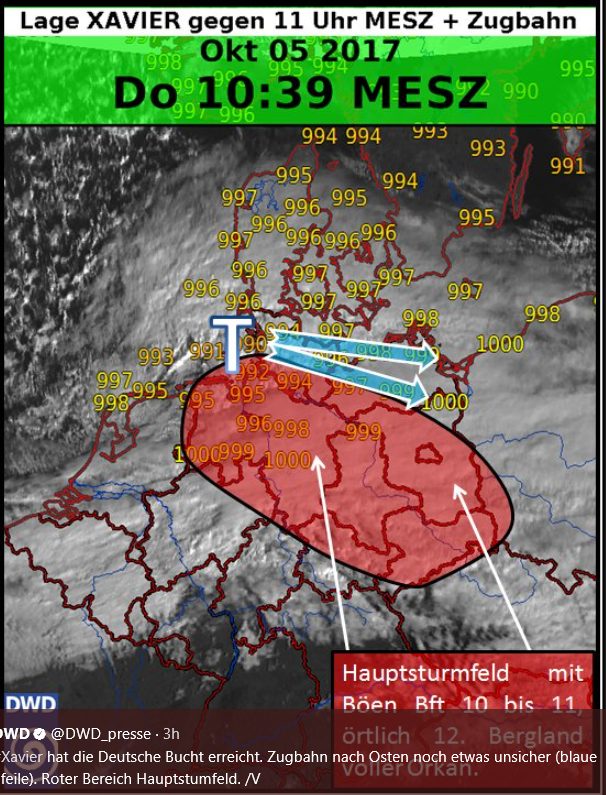 In the chart above the low pressure system Xavier designated by “T” was centered just over the North Sea just west of Hamburg and moving eastward. The DWD chart above shows the uncertainty of the storm’s projected path with a range of some 150 km upon reaching the Polish border just hours later. Models cannot even predict storm location even 6 hours in advance!

Too much emphasis on models?

Surely meteorologists will be the first to admit that the complexity of storm systems is still far too great to allow predictions of any reliable certainty.

In a recent daily summary at Weatherbell Analytics, veteran meteorologist Joe Bastardi even cautioned against relying too heavily on models, which he said sometimes flip flop between scenarios in just 6 hours. Bastardi feels there has to be greater emphasis on patterns observed over the decades. Already two weeks earlier on September 22 Bastardi warned of a Gulf storm developing between October 1 and October 10. He was right. His forecast was based on patterns, and made long before models sniffed out the storm. Models indeed still have a very long way to go.

If a 6-hour projection is uncertain, then projections out 20 years are worthless

This gives us an idea of what to expect of climate models going out 20, 50 or even 100 years in the future, which woefully lack long-term historical data from major climate drivers such as the oceans, continents, sun and atmosphere. Little wonder that IPCC climate model temperature projections made 10 years ago are already wrong.

But if you happen to be someone who is still sold on the projections made by these climate models, then I’ve got a great deal on a bridge in Brooklyn for you.