Meteorologist Joe Bastardi warned of a cold snap gripping the Eastern US many weeks ago, in October, at his Weatherbell Analytics site, which I visit almost daily. 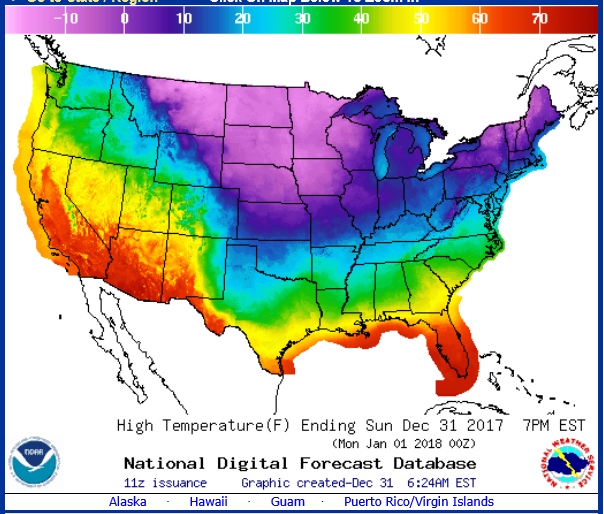 Today it’s all over the news: The Great Freeze of 2017 is smashing through the entire North American East, bringing with it a wave of record temperatures.

Cold records to sweep across continent

Many Daytime Record Low Maximums will be set on Dec 31 and Jan 1 for New Year’s celebrations — that means the afternoon high temperature for the day is really cold.”

In the East, it could be the COLDEST New Year’s Eve on record. Perhaps we could use a little bit of that good old Global Warming that our Country, but not other countries, was going to pay TRILLIONS OF DOLLARS to protect against. Bundle up!”

The cold snap brought with it huge, record-breaking snowfall in Erie, Pennsylvania totaling near 1.5 meters of snow, which led to photos of the sort we used to see decades ago, in the 1960s.

Toronto totally smashed the previous previous record for December 28 set in 1960, when it hit -18.9°C, recording -22°C. “It’s basically all across the country that the cold weather is entrenched, and it’s not going away quickly,” said Peter Kimbell. The CBC reports that extreme cold snap expected to linger indefinitely, citing Environment Canada.

The UK Telegraph reports the Niagara Falls has frozen over with wind chills of -89°F!

Coldest in a century

In the US, in Missouri for example, neoshodailynews.com here warns that this weekend temperatures could be the coldest in a century. Already a number of events are getting cancelled due to the extreme cold.

Criticism on blaming it on a climate trend

It’s no surprise both sides are rushing to (mis)use the event as evidence to support their side of the climate issue. Veteran meteorologist Joe Bastardi tweeted here that it’s a purely natural event that has nothing to do with cooling or CO2:

It’s a shame that any extreme event gets weaponized depending on agenda being pushed. Laid out for all to see in Oct real time battle test based on ace/enso relationship for early season cold. Had everything to do with 1933, 1950, 1995, 2005, 2010 ace, TYPE of La Nina idea, not CO2.”

CNN sharply criticized Trump’s humor, claiming that the President does not know the difference between climate and weather. Strange how CNN develops sudden amnesia over all the times they’ve suggested single hurricanes, droughts or tornadoes showed climate change.

Due to ocean cycles, little to do with CO2

At a recent Daily Summary, Joe called the Great Freeze a “major event” and warned the cold would spread and deepen over the coming days. He questions that CO2 could be responsible for the global warming of the past century, suspecting rather that it is due to ocean surface temperature cycles and thus increased water vapor in the air.

Joe is likely as right, or even more so, than any other expert – as only he predicted the cold way back in October using natural patterns of the past. No one else went out on that limb.