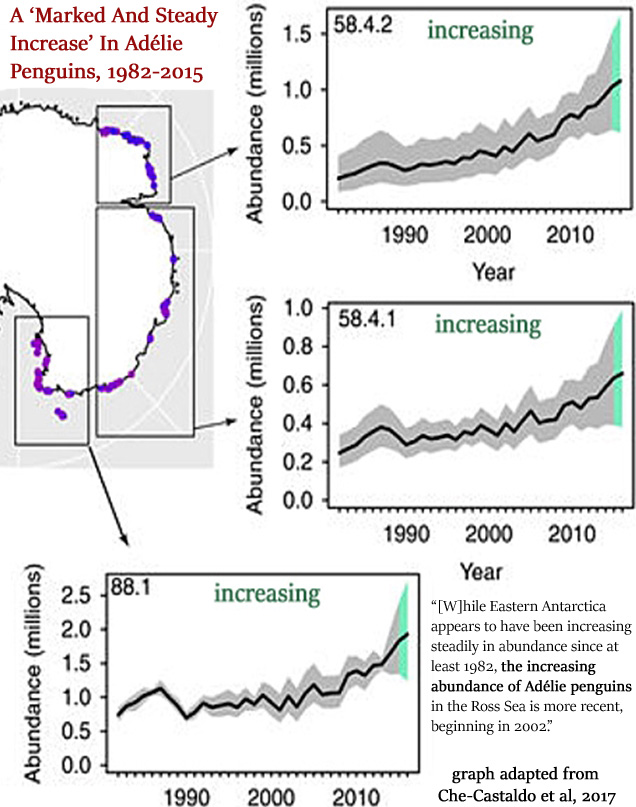 Perhaps because of their unique visual appeal and heavy representation in children’s books and movies (and climate blogs), penguins may subjectively rank second only to polar bears in their polar popularity.

Advocates of climate alarm have historically used images of forlorn and starving polar bears stranded on melting ice floes to spur human guilt and policy action.  In 2008, polar bears were even classified as endangered due to modeled expectations of their imminent demise.

According to recently published peer-reviewed scientific papers, however, polar bears have been defying the narrative that says dangerous anthropogenic global warming (DAGW) is targeting them for extinction.

That’s because in recent decades 92% of Canadian polar bear subpopulations have remained stable or increased, leading scientists to conclude that “it seems unlikely that polar bears (as a species) are at risk from anthropogenic global warming” (York et al., 2016).  Local Inuit populations even report that there are “too many polar bears now” (Wong et al., 2017).

Since the Arctic’s polar bears have not been cooperating with the DAGW narrative (by failing to die off in greater numbers), perhaps penguins, another beloved polar species, could take their place.  After all, the plight of Antarctica’s penguins has not received nearly as much worldwide attention or sympathy.

But scientists have found that penguins have not been cooperating with DAGW expectations either.

In recent decades, and over the course of the last 200 years, penguin numbers have either increased or remained stable.

According to Yang et al. (2018), however, increases in penguin abundance coincide with cooling periods.  They note that there were higher Adélie penguin numbers in the Ross Sea region during the Little Ice Age (1600s to early 1800s) than during the 19th and 20th centuries.

Interestingly, though, these scientists also found that there has been no net change in penguin population since the 1800s, a determination that would not appear to fit the perspective that modern climate changes are unprecedented or even unusual.

Furthermore, when it’s considered that there has been no significant regional temperature change between the 1880s and mid-2000s, and that the Ross Sea has undergone a dramatic cooling trend (-1.59°C per decade) since 1979 (Sinclair et al., 2012), any decreasing population trend in recent decades would necessarily coincide with a cooling rather than warming climate. 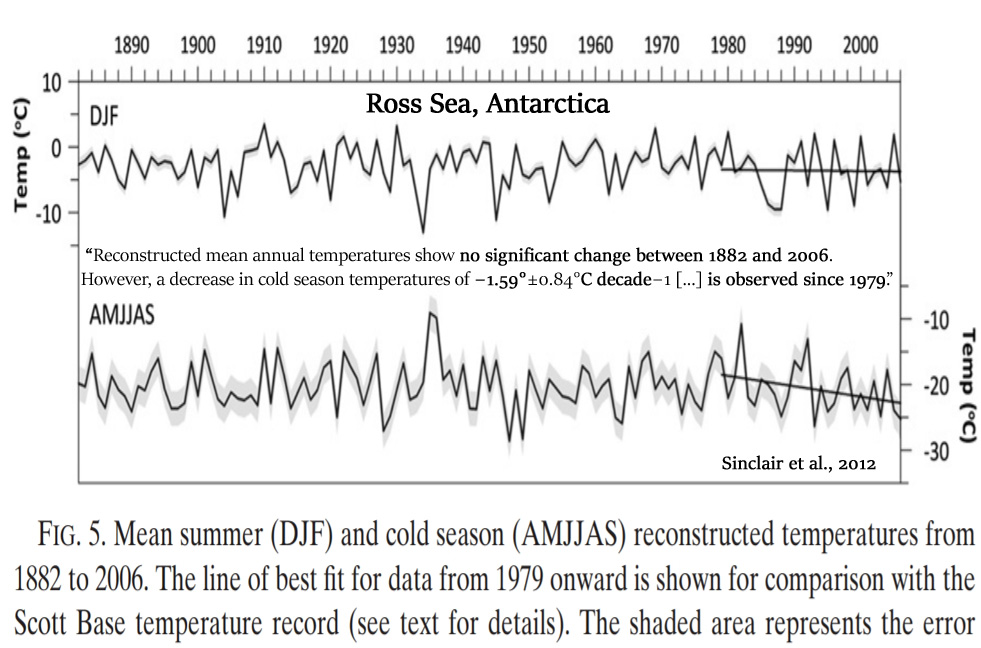 In another paper published in the journal Nature Communications a few months ago, Che-Castaldo et al. (2017) analyzed 267 Adélie penguin colonies residing on the Antarctic continent and found their numbers have undergone a “marked and steady increase“ between 1982 and 2015.

With both polar bears and penguins perpetually failing to support the narrative invoking deep concern about the species-depleting effects of anthropogenic global warming, perhaps a new animal icon foreshadowing the dangers of climate change will emerge at some point.

Reindeer are polar animals that are seasonally quite popular.   Perhaps they could take the place of polar bears and penguins.

Bårdsen et al., 2017     The Pursuit of Population Collapses: Long-Term Dynamics of Semi-Domestic Reindeer in Sweden … We investigated the population dynamics of Swedish semi-domestic reindeer from 1945 to 2012 at the reindeer herding district-level (Sameby) to identify possible population collapses or declines […] but found no evidence of large-scale reindeer population declines and no visible synchrony across adjacent populations. Our findings were unexpected as both reindeer populations and the pastoral lifestyle face increased habitat loss, predation, fragmentation and climate change.

[A]ggregated abundance [for 267 Adélie penguin colonies] across all sites in this region showed extended periods of both increasing and decreasing abundance over the last three decades [1982-2015].

We also find a long-term decline in abundance in the South Orkney Islands, following an initial period of increase in the early 1980s. In contrast, we found a marked and steady increase in abundance around the rest of the Antarctic continent, including both Eastern Antarctica and the Ross Sea.

Commensurate with other studies [Lynch et al., 2013], we find that the population of Adélie penguins on the Antarctic Peninsula declined between 2000 and 2008, though we found an unexpected rebound in abundance starting in 2008. This regional increase in abundance may, in part, be driven by sites in the Marguerite Bay area, where Adélie penguins are stable or even increasing. However, this increase may also reflect a cessation of regional warming on the Antarctic Peninsula since the late 1990s [Turner et al., 2016], which may benefit ice-dependent species like the Adélie penguin.

We find that while Eastern Antarctica appears to have been increasing steadily in abundance since at least 1982, the increasing abundance of Adélie penguins in the Ross Sea is more recent, beginning in 2002. 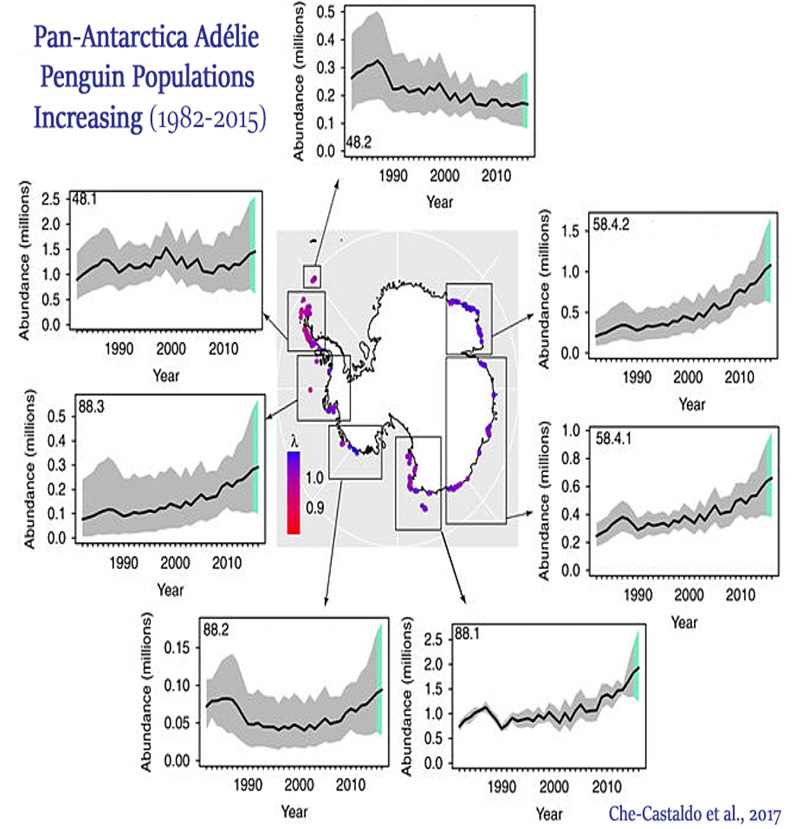 Monitoring data have shown that Adélie penguins at Cape Bird had an increasing trend in the 1970s, likely linked with changes in sea-ice extent and polynya size, but also with variation in competition with minke whales (Ainley et al., 2005; Wilson et al., 2001). Our study suggests that the penguin populations increased in the 1960s as well, consistent with their research. 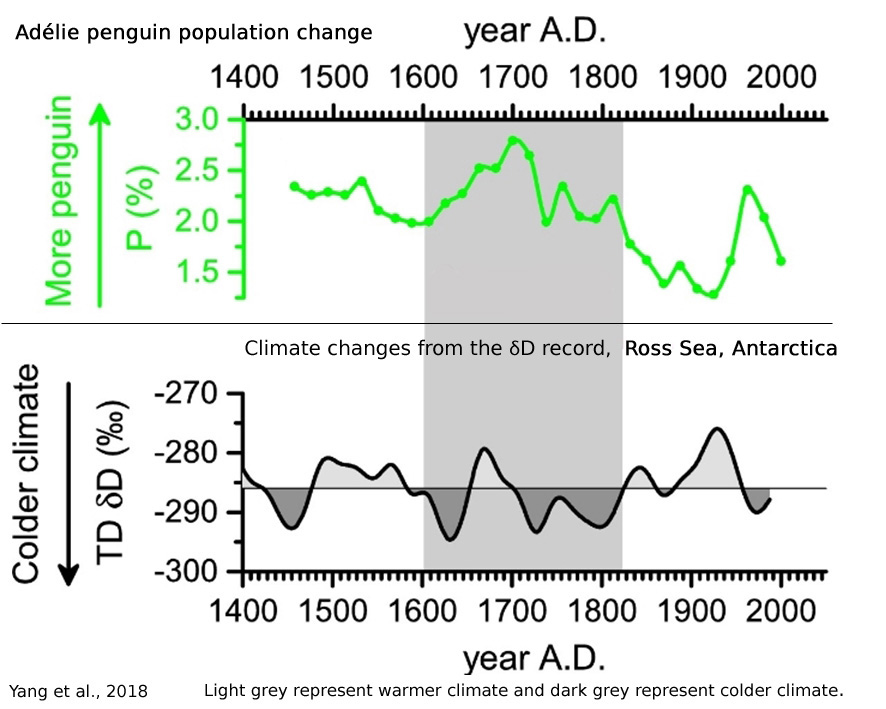 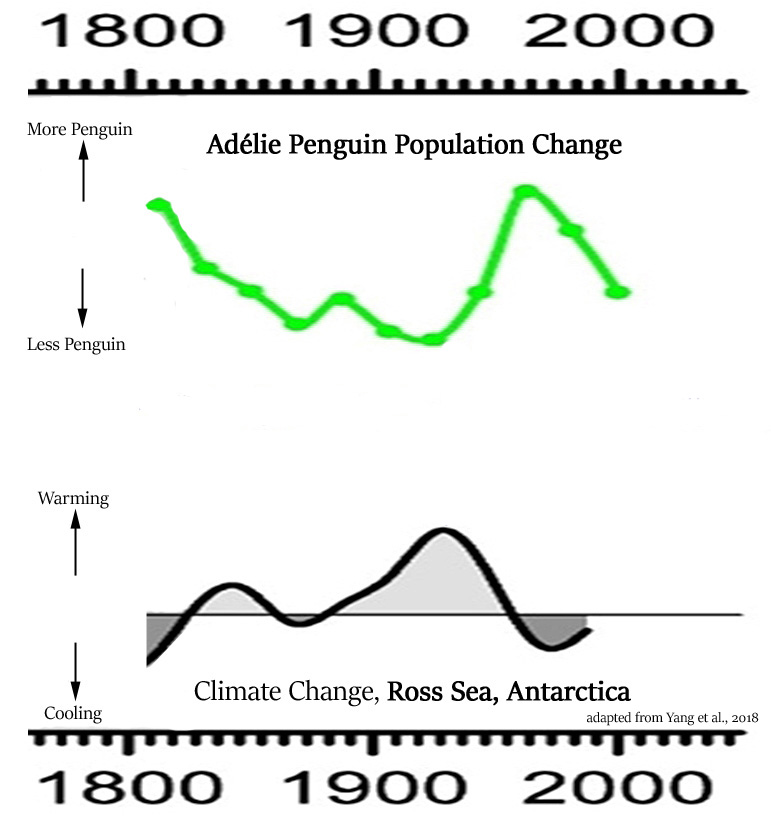