Quartz.com here presents an interesting chart which tells us the green energy revolution of the past 30 years has resulted in practically nothing. It’s been a flop. Fossil fuels remain as wildly popular as ever. 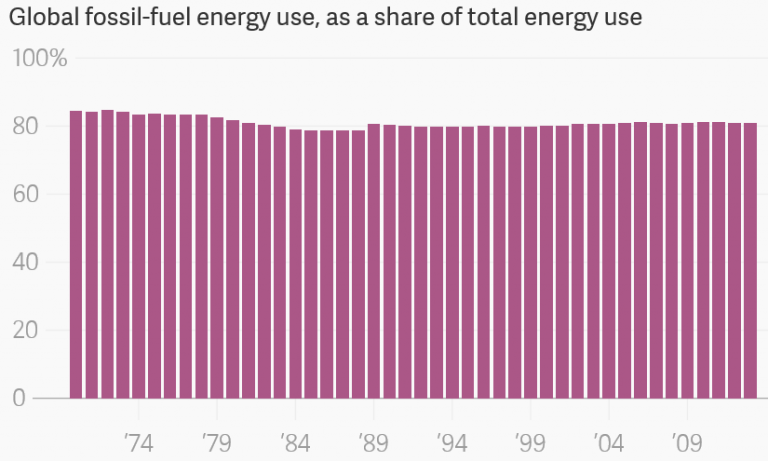 Global fossil fuel use as a share of total energy has risen since James Hansen’s 1988 testimony. Chart: Quartz.com.

Higher than 1988, when James Hansen testified

We can all recall a sweating James Hansen’s 1988 stage-crafted testimony before Congress, warning that increasing atmospheric CO2 concentrations would lead to spiraling global warming. And unless action was taken urgently, the ice caps would soon melt and the earth would sizzle.

Countries as a result mobilized 100s of billions of dollars to eliminate the use of these “dangerous, climate-killing” fossil fuels.

Today for all that money you’d think that tremendous progress in reducing fossil fuels would be the result. You couldn’t be more wrong.

The sad truth is that after hundreds of billions spent, and trillions committed, fossil fuels’ share of total energy consumption globally has in fact risen since Hansen’s doomsday testimony, see the figure above!

Bringing the dead back to life

What may be a surprise to many is that whenever we burn fossil fuels, which originate primarily from ancient plants that died and were naturally sequestered in the earth as “fossils” eons ago, we are in fact taking this once live carbon and recirculating it back into the current, living ecosystem. The result: More carbon-based life is getting produced today. The planet is greening. Now the earth is teeming with more life than it has seen in millions of years. That’s fundamental science.

So if you want the system to have more life, just add carbon to it. One way is to add old carbon (by burning fossil fuels) that’s been locked away in the ground.

On the other hand if you want to limit life, then remove the carbon from the eco-system. Funny how the alarmists claim to be worried about life being under threat on earth, yet are striving to remove its very source.