The Telegraph here is calling it “the UK’s coldest spring day on record” with “life-threatening conditions“, adding

The Armed Forces have been forced to step in as police and hospitals struggle to cope with freezing weather sweeping across Britain. […] Nearly every part of the country was hit by snowfall and gales as the Met Office said Thursday was the UK’s coldest spring day on record.”

The online British daily also reports that 10 deaths have resulted in Britain so far as storm Emma took its toll with heavy snow as it collided with the massive blast of frigid Russian air which had swept across the continent earlier in the week.

The situation in Great Britain has gotten so bad that the British Armed Forces have been called out and there’s a risk of gas running out.

The mixture of low temperatures and high winds is proving to be lethal, also elsewhere across Europe as death toll mounts.

The brutal winter conditions witnessed this week are in stark contrast to George Monbiot’s 2005 claim:

The freezes this country suffered in 1982 and 1963 are, unless the Gulf Stream stops, unlikely to recur.”

In his February 14, 2005 article, after having sown “11 species of vegetable”, the Guardian journalist appeared to have lost control of his wits, and let the climate hysteria of the time get the best of him. Spiegel journalist Axel Bojanowski tweeted yesterday:

The current cold spell in Great Britain shows us once again just how out-of-place many climate comments are, here from the Guardian of 2005:” 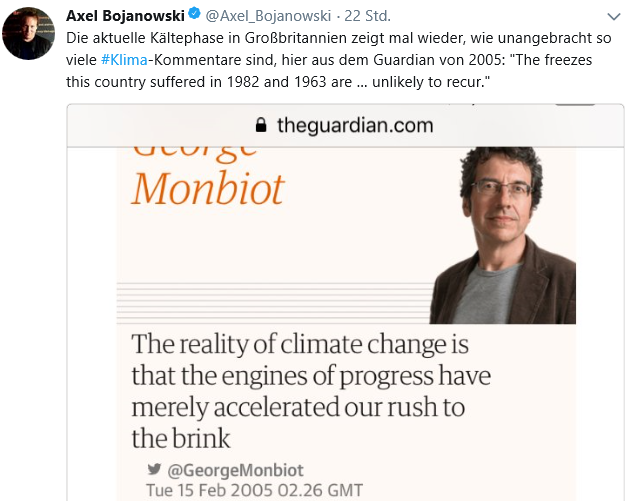 German Spiegel reported of “already 45 deaths from the cold” in Europe – and that was two days ago. That figure is likely to rise considerably in the days ahead. The good news is that the bitter cold is forecast to loosen its grip by the weekend. But for some, that will be too late.

The number of deaths from cold since Friday [Feb. 23] has risen to more than 45 – alone in Poland there were 18 deaths. In the Czech Republic there have been 6 deaths, in Lithuania 5 deaths, in France and Slovakia four deaths each, Italy, Serbia and Romania have each reported 2 deaths.”

The English language The Local here writes that Germany death toll has since risen to four, as authorities struggled to provide adequate shelter. The figure of 45 dead does not appear to include the 10 cold fatalities in Britain.

Another misery helped along by the harsh winter conditions in Germany is the country’s acute flu season. MSN Nachrichten here reports:

The flu has gripped Germany. At the Dresden University Clinic the doctors hardly know where to put the acute cases. The number of new cases is as high as never before.”